Apple Watch Series 8 Hands-On: Your Watch Can Now Track Your Temperature and Detect a Crash 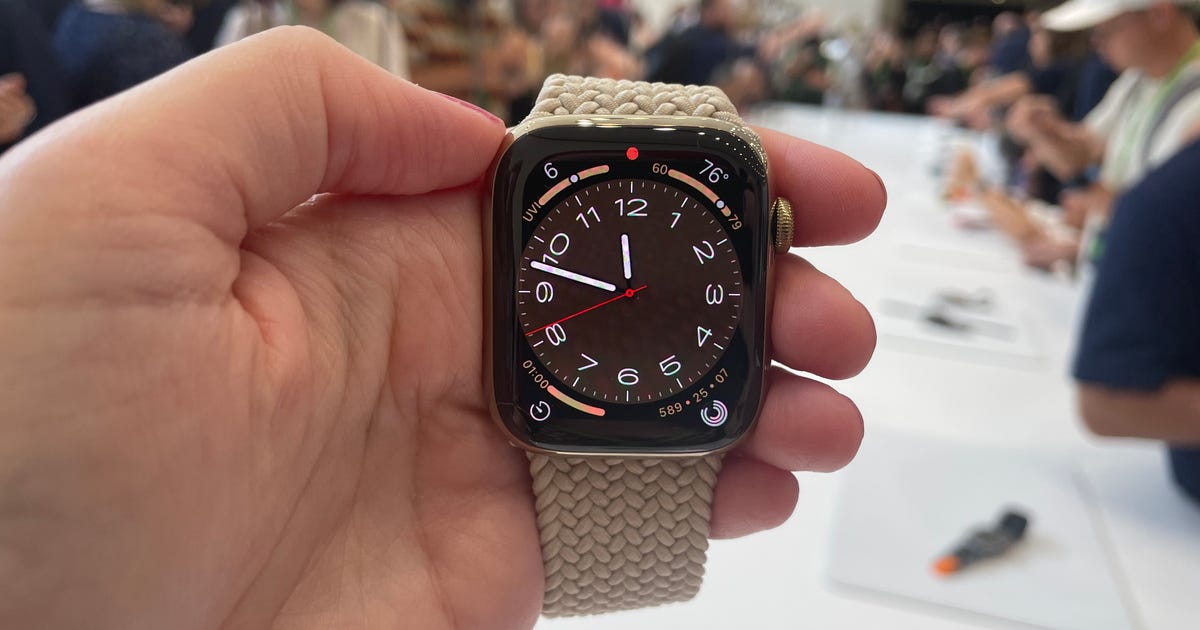 This story is part of Focal Point iPhone 2022, CNET’s collection of news, tips and advice around Apple’s most popular product.

Apple announced the Apple Watch Series 8 during the company’s annual fall product event on Wednesday. The GPS version starts at $399 (£419, AU$629), while the cellular version begins at $499. It’ll be available on Sept. 16 with preorders beginning immediately. Apple also announced the rugged Apple Watch Ultra, which starts at $799, and a new version of the more affordable Apple Watch SE, starting at $249 and on preorder now. (Here’s everything Apple announced at its Sept. 7 event.)

The most significant change is the addition of a temperature sensor, marking the first time Apple has added a new health sensor to its smartwatch since the Series 6 arrived with blood oxygen saturation measurements in 2020. The new batch of Apple Watches, which includes the Series 8 as well as the new SE and Ultra models, are also the first to include car crash detection, further underscoring Apple’s emphasis on wellness and safety. The Apple Watch Ultra is a new outdoorsy version of the Apple Watch aimed at athletes, while the SE is a refreshed version of Apple’s cheaper smartwatch.

The Apple Watch Series 8’s temperature sensor is the biggest upgrade in this year’s watch. There are actually two sensors, one under the display and another on the back, closer to the skin. This should improve accuracy by helping the watch distinguish your wrist temperature from other factors affecting the temperature in your environment. The watch measures your wrist temperature overnight every five seconds and tracks it in the Apple Health app.

Since this is a passive reading that happens overnight, I wasn’t able to try it in Apple’s demo room. But I did get to see how this information will be presented in the Health app. The app will show changes in your baseline temperature in a chart within the app, along with context about what the data means. The company says shifts in your baseline temperature could be indicative of exercise, jet lag or illness. There’s also a new wrist temperature tile in the Health app’s summary section where you can tap into this data.

The Apple Watch is also getting a new safety feature this year: car crash detection. If the watch detects a crash, it will notify emergency services and the wearer’s emergency contacts if the wearer has been unresponsive for 10 seconds. This is only available in the Series 8, new SE and Apple Watch Ultra models because it uses the upgraded gyroscope and accelerometer.

Go straight to the source for your Apple Watch Series 8 preorder and score three months of Apple Fitness Plus.

Another noteworthy addition is the Apple Watch’s low power mode, which Apple says should prolong battery life for up to 36 hours for the Series 8. The new low power mode turns off features like the always-on display and automatic workout detection to preserve functionality while extending battery life. Although Apple just announced the feature on Wednesday, it will also be available for the Series 4 and higher. Otherwise, the Apple Watch’s battery life is generally the same at 18 hours.

The overall design of the Apple Watch seems generally unchanged this year. The Series 8’s size and overall shape remain the same, and it will be available in midnight, starlight, silver and Product Red with an aluminum casing. The stainless steel version, which I got to try during my time with it, will come in silver, graphite and gold.

Most of the Apple Watch Series 8’s most significant changes, like temperature sensing and low power mode, are under-the-hood changes rather than cosmetic upgrades. We’ll have to spend more time with the Series 8 to know how much these additions really impact the overall experience. But based on what we know so far, the Series 8 seems like another step toward the Apple Watch becoming an even more comprehensive wellness device.

Apple leads the global smartwatch market with 29.3% of shipments in the second quarter of 2022, according to Counterpoint Research. Samsung follows in second place with 9.2% of the worldwide smartwatch shipments during the same period. Still, Apple faces increased competition. Even though Samsung trails far behind Apple in terms of shipments, Samsung saw 40% growth year over year, compared with Apple’s 8% growth, according to Counterpoint’s data.

Although the iPhone is Apple’s biggest moneymaker, products like the Apple Watch are an important part of the company’s business. The wearables, home and accessories division, which encompasses products like the Apple Watch and AirPods, is the company’s third largest business following the iPhone and digital services. Apple said in a quarterly earnings call in April that its wearables business is now the size of a Fortune 100 company.

Share
Facebook
Twitter
Pinterest
WhatsApp
Previous article
Need loan? You can fall back on your mutual fund
Next article
‘We’re seeing a complete reversal of market conditions in just 12 months’: Rents fell from July to August — the first decline in nearly two years