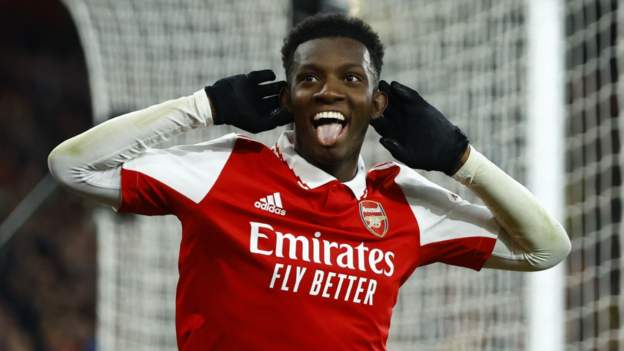 Arsenal retained control of the Premier League title race after Eddie Nketiah’s 90th-minute winner gave them a dramatic victory over Manchester United in a thriller at Emirates Stadium.

Manchester City’s earlier win over Wolverhampton Wanderers applied pressure on the Gunners but they responded with character and quality, even after going behind, to secure a five-point advantage at the top with a game in hand.

United’s man of the moment Marcus Rashford fired home a superb right-foot strike from 25 yards to give them a 17th-minute lead.

Arsenal responded fiercely and were level seven minutes later when Granit Xhaka’s cross created a heading opportunity for Nketiah, who got in ahead of Aaron Wan-Bissaka at the far post.

Bukayo Saka’s angled drive put Arsenal ahead eight minutes after the break but their advantage lasted only six minutes, with Lisandro Martinez heading his first goal for the club after keeper Aaron Ramsdale dropped a corner.

Arsenal looked the more likely winners in the closing stages, with Saka hitting the post and Nketiah denied by David de Gea’s outstanding save.

The pressure paid off in the closing moments when Nketiah – a striker who is doing an outstanding job filling in for injured Gabriel Jesus – turned in from close range to spark wild scenes of celebration at Emirates Stadium.

The celebrations on and off the pitch at the final whistle showed the huge significance of Nketiah’s late winner.

A draw would hardly have been disastrous for Arsenal coming against Erik ten Hag’s improving Manchester United – but the whole mood was lifted sky high by Nketiah’s last-gasp intervention.

Aware Manchester City were on their shoulders after beating Wolves, Arsenal’s nerve was further tested when Rashford’s golden run continued and he put United ahead.

Arsenal responded with the intensity and quality that has marked their game on their route to the top of the table – ordered and composed; still creating chances until Nketiah settled matters.

Saka and captain Martin Odegaard are creating chances and threat, while Nketiah is ensuring the absence of Gabriel Jesus – which many feared would seriously sabotage the Gunners’ title challenge – is not stopping them winning matches.

Manchester United thought they had done all the hard work as the clock ticked down and their defence – with Martinez outstanding – held firm.

So it was understandable that they looked so devastated when the brief hope offered by a VAR check on Nketiah’s winner was extinguished and they simply did not have enough time to salvage a point.

Arsenal deserved the win and United may look back on the expensive absence of the suspended Casemiro, who would have provided vital experience and game management in those frantic closing stages, and the fact that giant striker Wout Weghorst is still adjusting to life back in the Premier League.

There was still plenty to admire in United, who gave as good as they got for the first hour and fought back strongly after Saka put Arsenal in front.

In the end, United were left bitterly disappointment by the defeat, with a heavy recent programme leaving them looking weary-legged near the end.

Arsenal fully merited the victory but there is no doubt tenacious United are heading in the right direction.

Player of the match

Australian Open 2023: Why does tennis finish so late? And what’s the impact on players?