As Republicans struggle in some close Senate races, they look to Colorado for an upset : NPR 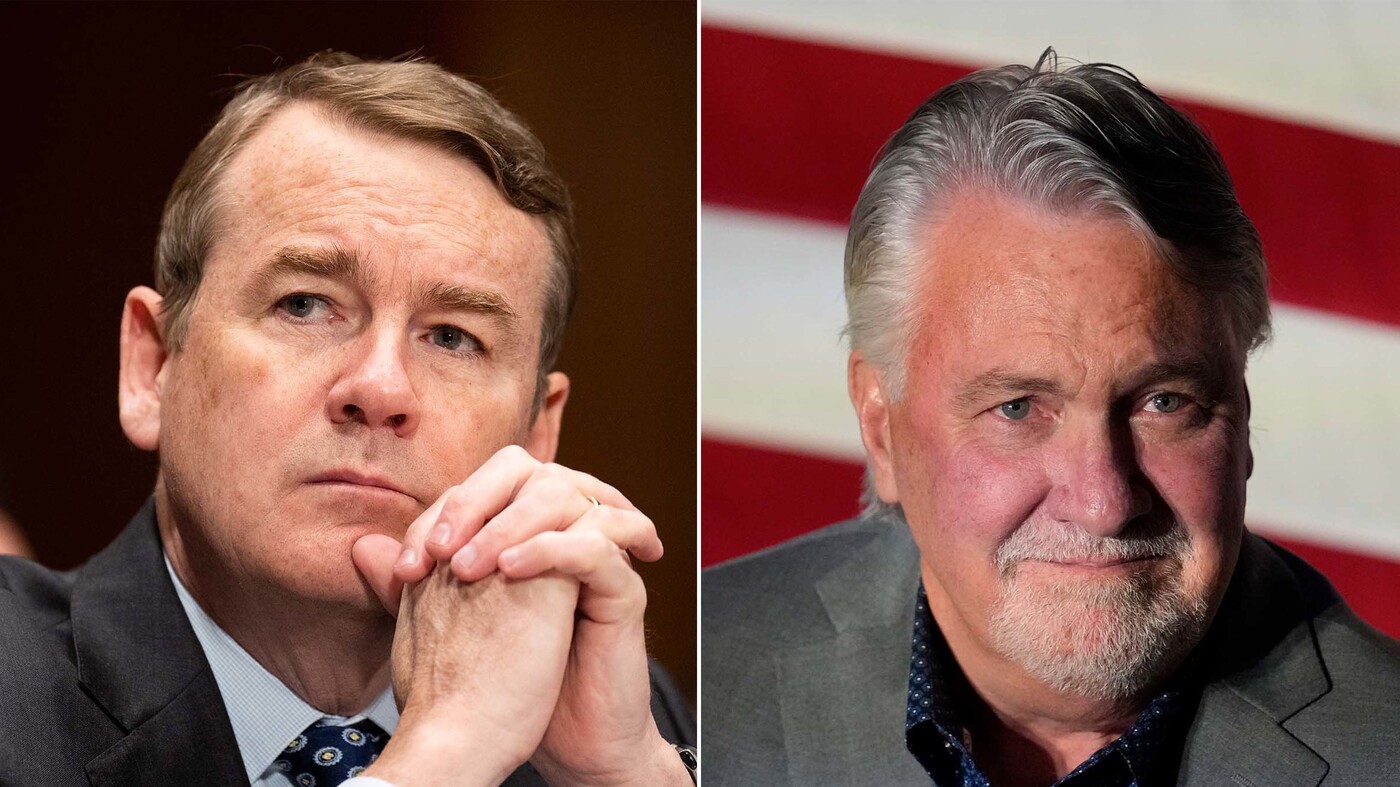 Left to right: Michael Bennet and Joe O’Dea. Bennet is running for his third term in the Senate against GOP candidate Joe O’Dea who is the one Republican nominee in a competitive race not endorsed by former president Trump.

Left to right: Michael Bennet and Joe O’Dea. Bennet is running for his third term in the Senate against GOP candidate Joe O’Dea who is the one Republican nominee in a competitive race not endorsed by former president Trump.

Democrats have been feeling more optimistic about their prospects in this fall’s midterm elections lately, but Republicans are looking to the Rocky Mountains to pull an upset in their campaign to flip control of the Senate.

GOP leaders hope their nominee in Colorado — construction company CEO Joe O’Dea — can flip the blue seat red. He’s a rare Republican who affirms that President Biden won the 2020 election, and thinks someone other than Trump should lead the party in 2024.

“I’m going to campaign for somebody else and we’re going to move the country forward. and that’s where I’ve been.” O’Dea said, mentioning Florida Gov. Ron DeSantis, former U.N. Ambassador Nikki Haley and former Secretary of State Mike Pompeo as alternatives to Trump.

Of the roughly dozen competitive Senate races this election cycle O’Dea is the one Republican candidate not endorsed by Trump. In the primary, he defeated right-wing election denier Ron Hanks — even though Democratic groups in the state tried to elevate Hank’s candidacy.

A big part of O’Dea’s strategy is outreach to Latino voters, who could be the second largest voting block in the state. At a Hispanic cultural event in Denver, O’Dea drank a Mexican lager and bought his wife earrings from a local vendor after talking to NPR about his pitch to voters.

Unlike the bulk of his party, O’Dea backs protections for Dreamers and supports a path to citizenship for millions of undocumented workers. He says Congress should approve legislation that addresses both border security and legal status for immigrants. But he stressed Hispanic voters tell him they are focused on the same things as all Coloradans.

“They’re worried about the price of gas and this record crime that’s taking over the city that’s spot on their mind right now,” he said.

Senate Minority Leader Mitch McConnell, R-Ky., has praised O’Dea’s campaign. With other GOP candidates underperforming in the polls in competitive races in Pennsylvania, Arizona and Georgia, there is a close eye out for whether the Senate Leadership Fund, the super PAC aligned with McConnell, will invest resources in the state.

Over tea at a local coffee shop in Denver, incumbent Michael Bennet, who retains a significant advantage in fundraising heading into the fall, pushes back at the notion that O’Dea is a moderate who can compete here.

“That is that is the national media’s interpretation of what’s going on in this race,” Bennet said.

Inflation, housing and abortion are key issues in Colorado

Bennet spent much of August traveling the state touting legislation Democrats passed to lower prescription drug prices and invest in climate programs. He agrees with his opponent that voters are very focused on inflation.

“What people are having to pay for food and gasoline is a challenge. But I think that my sense is that people are actually seeing Washington begin to work again,” Bennet said. “And after the chaos of four years of Donald Trump, that’s really welcome.”

Most shoppers and vendors NPR spoke with at the final week of the Green Valley Ranch summer farmer’s market north of downtown Denver don’t know who’s running in November’s Senate race. But they had strong feelings about what matters for their vote this fall.

Kettle corn vendor Leon Smith said “housing and jobs” are his priorities. Smith voted for former President Trump, but he told NPR he doesn’t feel compelled to cast his vote for either party this fall.

For Linda Wilson, who leans Democrat, one issue is top of mind — abortion. “When I was younger, I had the choice, because I was pregnant before I got married. It was a choice. It wasn’t an option that I would have chosen for myself. But I had that option,” she said.

Abortion may be O’Dea’s biggest challenge in the race

The Republican backs some abortion rights, but he’s running in a state with a long history of protecting abortion access. The state codified its protections this year — a law O’Dea opposed. He also voted for a ballot measure in 2020 that banned abortions after 22 weeks with no exceptions. That was soundly defeated.

O’Dea sidestepped whether those positions put him out of step with a majority of Colorado voters. Instead he emphasized when he thinks abortion should be legal: “I believe, the first five months, the mother has the choice. After that, there should be some exceptions rape, incest, life of the mother.” But ODea said he supports Trump’s Supreme Court appointees who voted to overturn Roe v. Wade. Abortion rights advocates argue that position is inconsistent.

Pressed on his position, O’Dea told NPR, “I believe in good conservative judges. I like that. But I don’t believe in the decision that they made.” He said he would represent his constituents if a nationwide abortion ban came up in the Senate.

But Bennet argues O’Dea’s position on abortion, along with his stances on other issues — will turn off Colorado voters: “He’s the nominee of the Republican Party here in Colorado. And he says that Trump bears no responsibility for what happened on January 6. That should be disqualifying, to say nothing of his position on Roe v. Wade, to say nothing of, you know, his position on the trickle down economics that have made Colorado and so many places in this country unaffordable for working people.”

Trump as a factor in the midterms

As O’Dea deliberately pivots away from the former president, Bennet said, “It’s a reality that Trump hangs over everything.” Bennet says in every townhall he’s had since Trump was elected, he brings up the threat to democracy.

Trump isn’t on the ballot in November, but is someone who came up with most of the voters NPR talked to around the Denver metro area.

Philip Cardenas, who sells freeze dried candy at the Green Valley Ranch farmer’s market, plans to back Bennet. He admits he doesn’t know anything about O’Dea but says he’s concerned about extremism from the GOP.

“I think a majority of Americans are purple. I mean, if the climate was different, I would definitely – and I thought a Republican president would do better – I would vote. But they’re too far right, right now, with the MAGA crowd,” Cardenas said.

Leon Pommer, a Republican shopping at the outdoor store Cabela’s in Thornton, Colo., said he voted for Trump and credited him for keeping energy prices lower during his tenure. “He did real well on the gas prices. You know, he allowed fracking was going to have the oil pipeline come down from Canada, which would have kept prices lower.”

Pommer, along with his wife Karen, said they planned to back O’Dea, but Karen said she left the Republican “arty to become an independent this year. “I was disillusioned with Trump,” she told NPR. “I don’t think he was honest.”

O’Dea called January 6 “a black eye to the country” and praised former Vice President Mike Pence for his actions that day.

Complaints about partisanship blocking real action are common from voters across the political spectrum.

Lynette Vigil, a mom of 7, says housing costs are out of control. But she doesn’t have much faith Congress will do much about it. “It’s a circus,” she said. “There’s no other word for it. It’s a circus. I feel like people are living in an alternate reality.”

Bennet told NPR he gets the frustration, but points to a string of recent bills as evidence that the Senate is working.

“I mean, it’d be hard to imagine somebody more disenchanted with Washington, D.C., than I am. But I will say that for the last 12 months or so, it’s really been amazing to see what’s been accomplished, mostly in a bipartisan way — Republicans and Democrats working together,” Bennet said. “And I don’t think that should be discounted.”

ODea’s pitch to attract independents and Democrats is that he’s someone who is willing to compromise. But Bennet says this election is a choice — between a party that has made some headway to bring down high prices or a party dominated by a leader still fighting about the last election.