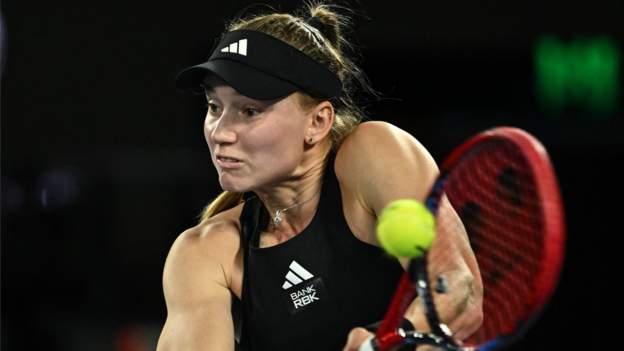 Rybakina fired 11 aces and 24 winners as she claimed a dominant 6-2 6-4 victory over Latvia’s Ostapenko.

The Kazakh wrapped up victory in one hour and 19 minutes following a lengthy rain delay on Rod Laver Arena.

Rybakina, seeded 22nd, will face either American world number three Jessica Pegula or two-time champion Victoria Azarenka for a place in the final.

“I’m super happy to be in the semi-finals for the first time,” Rybakina said.

“Of course I was nervous, especially in the last game. I’m super happy I managed the emotions and I played really well today.”

Having stunned top seed Iga Swiatek in the fourth round, Rybakina – the youngest player left in the women’s draw – maintained that impressive level against 2017 French Open winner Ostapenko.

In a meeting between two of the three major champions still standing among the last eight, Rybakina made a confident start as she broke 17th seed Ostapenko’s serve in the opening game.

Rybakina set up another opportunity in game five with her powerful shot-making before play was suspended by rain.

Following a wait of around half an hour for the court to be dried, Rybakina returned to court to clinch a double break lead and ultimately serve out the set under the roof.

Ostapenko, who had hit 118 winners in her first four matches, responded with a break at the start of set two but Rybakina responded immediately before surviving four break points to level at 2-2.

She continued that momentum to bring her second major semi-final into focus, breaking the Ostapenko serve before wrapping up the match in fitting fashion, sending down a final ace to extend her tournament-leading tally to 35.

She added: “I will watch my opponents [tonight] but at the same time I need to rest and prepare for another tough match and battle.”