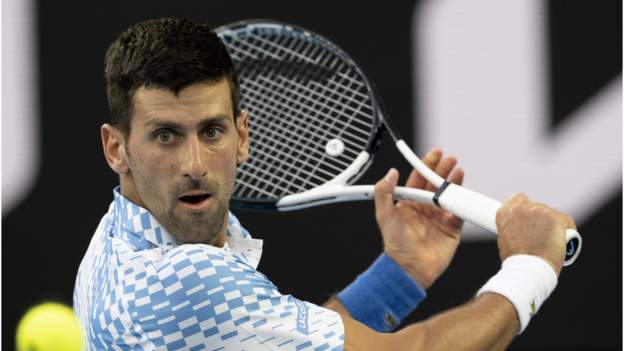 Can anyone deny Novak Djokovic a record-extending 10th men’s singles title at the Australian Open?

Only two other top-10 seeds remain at the quarter-final stage, with 2022 champion Rafael Nadal and Casper Ruud among those to suffer early exits.

Of those still standing in Melbourne, 21-time Grand Slam champion Djokovic is the only major winner.

Despite being hampered by a hamstring injury, he has lost only one set in his four matches so far as he looks to make up for lost time after missing last year’s tournament.

The former world number one, who was deported after his visa was cancelled in 2022, has not lost a match at the Australian Open since 2018.

Can anyone stop him this year?

Fifth seed Rublev will be the next to try, when he takes on Djokovic in the quarter-finals.

The Russian came back from 5-0 down in a final-set tie-break to beat Danish 19-year-old Holger Rune in the fourth round.

Rublev, 25, is aiming to reach a maiden Grand Slam semi-final but has lost in straight sets in two of his three previous encounters with Djokovic.

Greek third seed Tsitsipas is the highest ranked player remaining in the draw and has reached the semi-final stage in Melbourne in three of the past four years.

The 2021 French Open finalist, 24, had won 11 successive sets before he survived a fightback by Jannik Sinner in the fourth round.

Awaiting Tsitsipas in the quarter-finals is 21-year-old Czech Lehecka, who had not won a main-draw match at a Grand Slam prior to this tournament.

Knocked out in the first round on his debut at all four Slams last year, he has already caused several upsets in Melbourne by knocking out 21st seed Borna Coric, 11th seed Cameron Norrie and sixth seed Felix Auger-Aliassime.

Having never gone beyond the third round at Melbourne Park, Khachanov is aiming to reach his fourth major quarter-final after recording his best Slam result at last year’s US Open by reaching the final four.

Khachanov will come up against American 29th seed Korda next, following the 22-year-old’s wonderful run to the quarters.

Korda, the son of former Tour-level players Petr and Regina and brother of former women’s world number one golfer Nelly, beat 2022 finalist Daniil Medvedev in the third round before seeing off 10th seed Hubert Hurkacz in the last 16.

American Shelton, 20, is the unknown quantity of this year’s Australian Open, reaching the quarter-finals in his first trip outside the United States.

He has already bested his father’s Grand Slam record after Bryan Shelton reached the fourth round of Wimbledon in 1994, but the tour newbie has spoken of the freedom he feels having already exceeded expectations in Melbourne.

Shelton, ranked 89th in the world, will take on Tommy Paul in an all-American quarter-final.

The 2023 Australian Open is already one to remember for Paul, who is enjoying his longest run at a Grand Slam having never previously progressed past the third round.

The 25-year-old world number 35 defeated tour veteran Roberto Bautista Agut in four sets in the fourth round – his second triumph over a seed in Melbourne having earlier beaten another Spaniard, Alejandro Davidovich Fokina, in five sets.