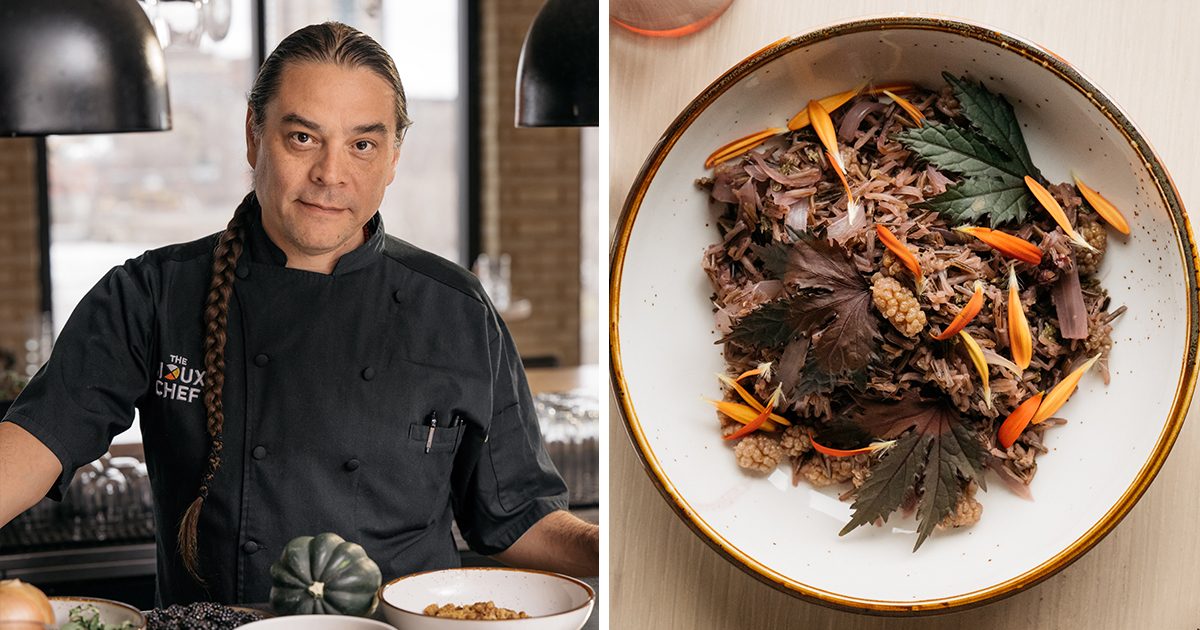 Raised on a reservation as part of the Oglala Lakota tribe, Minneapolis-based chef Sean Sherman aims to uplift the vibrant culinary culture of his ancestors.

Sean Sherman imagines a future where Native American restaurants will have a place alongside the sushi bars, taco spots, Italian trattorias, French bistros and hamburger joints that are found on the downtown streets of most cities in America.

A member of the Oglala Lakota tribe, Sherman grew up on a reservation in Pine Ridge, South Dakota. He got his first job in a restaurant, as a dishwasher, at age 13 and quickly rose through the ranks to become an executive chef.

(See these insider tips and tricks from pros in the food industry.)

For the past 20 years, he’s been on a mission to raise awareness of Indigenous food ingredients, systems and techniques, and to introduce Native American food to as many people as possible.

Sherman’s Reacquaintance with his Ancestral Cuisine

“What started me on this journey,” Sherman says, “was the epiphany that as a chef I’d been studying cuisines and techniques from around the world—French, Italian and Mediterranean, Southeast Asian and Japanese—but I didn’t know anything about the pre-Colonial food that my great-grandparents had eaten. I couldn’t, after all, just go online and order The Joy of Native American Cooking.”

After immersing himself in research and reconnecting with plants like chokeberries and timpsula, the wild turnip of the prairie that grew on the land where he was raised, Sherman went on to write his own version of that cookbook, The Sioux Chef’s Indigenous Kitchen, which won the 2018 James Beard Award for Best American Cookbook.

(Check out 15 other cookbooks with a focus on regional cooking.)

For a while he did pop-up Native American dinners and operated the Tantanka food truck, serving sunflower granola bars, a bison wild rice bowl and Indigenous tacos—a corncake base topped with proteins like rabbit, venison or elk.

Last year, along with partner Dana Thompson, Sherman opened Owamni by the Sioux Chef, a full-service restaurant in Minneapolis, where he now lives. The menu avoids dairy, wheat flour, cane sugar, beef, chicken and pork—ingredients that were not available to Native Americans before European colonization—and features dishes like cedar-braised bison, a green salad with toasted crickets, and wild rice sorbet. Owamni has achieved raves from food critics and was the winner of the 2022 James Beard Award for Best New Restaurant.

“It’s been overwhelmingly positive,” he says. “We weren’t striving to be popular. We just wanted to get the word out about Indigenous food and flavors, and we accidentally created one of the most popular restaurants in the country at the moment.”

These days, much of Sherman’s energy is focused on his nonprofit, NATIFS—North American Traditional Indigenous Food Systems. Its sprawling agenda includes running a nonprofit restaurant model, called Indigenous Food Lab, that doubles as a training and education center.

Through the food lab, which is planned to replicate across North America, Sherman wants to help bring native food, ingredients and agriculture back to tribal communities. That, in turn, he hopes will help curb the food-related illnesses, like type 2 diabetes, obesity and heart disease, that are so prevalent in these communities.

For Americans whose ancestry on this continent doesn’t predate 1492, Sherman has another message: “Be aware that wherever you are in North America, there’s Indigenous history and so much wisdom that Indigenous people have to offer.”

The principal pillar of Indigenous cooking is using ingredients native to the area in which you’re cooking. In these two recipes, you’ll find cranberries, mushrooms, sunflower, wild rice and more, all of which abound in Minnesota, where Sean Sherman is now based.

Wild rice is a flavorful and satisfying food, as are mushrooms, thanks to their umami taste and meaty texture. The chestnuts add a creaminess—and some protein! (Here’s how to roast the nut.) “This meatless dish will appeal to omnivore and vegetarian alike,” Sherman says.

In a large skillet, heat the oil over medium-high heat. Add mushrooms, shallot and sage; cook and stir until tender, about 5 minutes. Add wild rice, cranberries and stock. Cook until liquid is nearly evaporated.

Stir in roasted chestnuts, maple syrup and salt; heat through. Garnish as desired. Sherman likes to add edible leaves and flowers, such as hibiscus leaves and calendula petals.