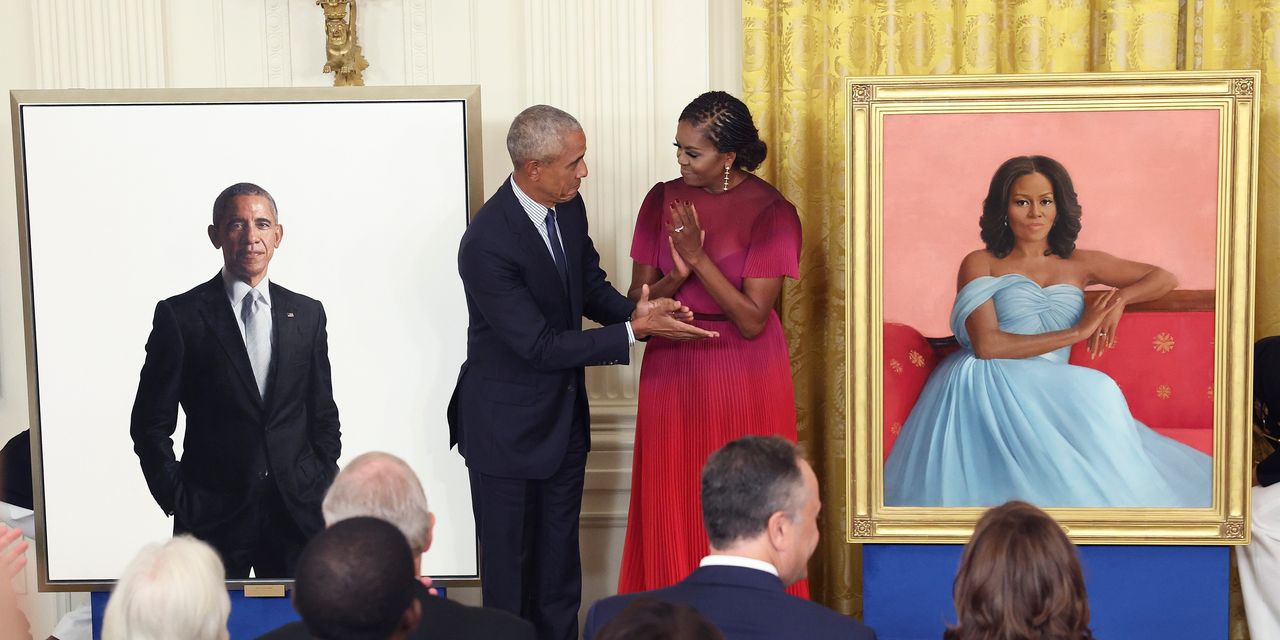 Regardless of what anyone else thinks about the Obamas’ White House portraits, former President Barack Obama is a big fan of his wife’s picture.

And Barack Obama credited Sprung with “capturing everything I love about Michelle: her grace, her intelligence … and the fact that she’s fine.” That compliment got a big laugh in the East Room of the White House on Wednesday afternoon, and Michelle Obama later thanked her husband for “such spicy remarks.”

It’s been a time-honored presidential tradition for sitting U.S. presidents to welcome their predecessors and spouses back to 1600 Pennsylvania Ave. to reveal their White House portraits, which then hang in the White House for generations to come. But the custom, which has transcended partisan politics for decades, notably stalled during Donald Trump’s four-year term in the White House. So the Bidens revived the ritual with Wednesday’s ceremony featuring the Obamas, Vice President Kamala Harris and second gentleman Douglas Emhoff.

“Barack and Michelle, welcome home,” Biden said. “For wight years, we grew to be a family … family from different backgrounds, brought together by shared values.“

Barack Obama was self-deprecating about his own portrait, thanking McCurdy for “taking on a much more difficult subject, and doing a fantastic job with mine.”

Fans said the paintings were “dignified and beautiful, just like the Obamas.”

Many on social media also noted the historic nature of these portraits, as the Obamas were America’s first Black president and first lady.

This was the first joint return for the Obamas to the place that they called home, and where they raised their daughters Sasha and Malia, for two presidential terms between January 2009 and January 2017. In fact, the ceremony marked only the second time that Barack Obama has visited the White House since his presidency ended in January 2017. (He was back in April to mark the 12th anniversary of his Affordable Care Act being signed into law, however.) And the event was also the first time that former FLOTUS Michelle Obama has returned to the White House since Trump took office in 2017.

These portrait ceremonies are often an excuse for past presidents to whip out their best dad jokes, and Barack Obama was no exception.

When sharing how much he missed his former White House aides and staffers, he mused, “I am a little disappointed that I haven’t heard of anyone naming a kid Barack yet …. or Michelle.”

The former president also teased that he had asked his portrait artist to paint him in a better light. “You’ll note that he refused to hide any of my gray hairs, refused my request to  make my ears smaller,” he said, making himself laugh. “He also talked me out of wearing a tan suit.” (This referred to the time he went viral for wearing a tan suit during a 2014 press conference whose topics included the threat posed by ISIS in Iraq and Syria.)

Indeed, Obama’s presidential predecessor, George W. Bush, riffed during his own portrait ceremony, which was hosted by the Obamas 10 years ago, that he was “pleased that my portrait brings an interesting symmetry to the White House collection. It now starts and ends with a George W” — referring, of course, to that Founding Father and first president, George Washington.

Or Bill Clinton cracked in 2004 (during his own portrait ceremony, hosted by George W. Bush) that, “most of the time, till you get your picture hung like this, the only artists that draw you are cartoonists.”

In fact, the White House Historical Association has paid for most of the presidential paintings since the 1960s. The first portraits financed by the association were of Lyndon Johnson and Lady Bird Johnson and of John F. Kennedy and Jacqueline Kennedy.

The way it traditionally works is, the association explains the portrait process with presidents and first ladies before they leave office. Then the former president and first lady choose an artist or artists to paint them. And recent tradition, no matter the party affiliation, has had the current president hosting his immediate predecessor for the unveiling ceremony in friendly fashion — as Clinton did for George H.W. Bush, George W. Bush did for Clinton and Obama did for the second Bush. The Trump presidency was an exception, and it is unclear whether Donald Trump and Melania Trump have commissioned official portraits of themselves.

Michelle Obama took the opportunity on Wednesday to explain why it was important to bring the convention back. “Traditions like this matter … for everyone participating in and watching our democracy,” she said. “And once our time is up, we move on, and all that remains in this hallowed place are our good efforts and these portraits — portraits that connect our history to the present day, portraits that hang here as history continues to be made.”

“What we are looking at today — a portrait of a biracial kid with an unusual name and the daughter of a water-pump operator and stay-at-home mom — what we are seeing is a reminder there is a place for everyone in this country,” she added.