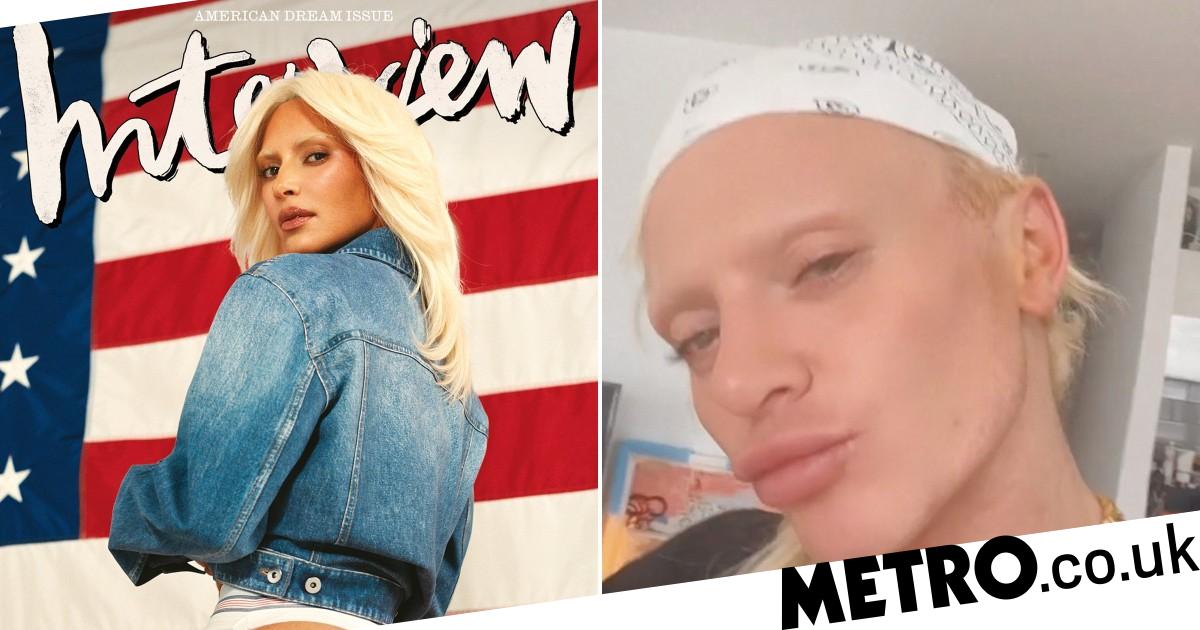 RuPaul’s Drag Race UK star Bimini Bon Boulash had an unexpected foray into the world of Kim Kardashian this week.

Fans were stunned when Kim totally transformed for the cover of Interview magazine, with blonde hair and brows that looked uncannily like a certain drag icon.

So when Bimini, 29, found they’d been flooded with messages, pointing out that Kim’s new cover shoot looks exactly like them, they had to respond.

‘Literally p***ing myself at all of these Kim Kardashian messages,’ they said.

‘The Kim Kardashian Interview magazine shoot looks great but everyone’s saying they look like me. Is it because their a**e is out?! Anyway Kimmy, love you girl.’

Bimini went on to show the mountains of messages received comparing them to Kim K and, honestly, we see it.

Kim, 41, bared her bum for the racy new shoot,  pulling down her jeans to reveal a jockstrap, while posing in front of the American flag.

She also unveiled her new transformation after bleaching her eyebrows to perfectly match her blonde hair.

In one snap, she donned a cropped leather jacket and provocatively tugged on her underwear, adorned with the flag.

Meanwhile, another photo also saw the mom-of-four model a spiked black Gucci choker and a bright red bodysuit as she gazed into the distance.

Kim landed the front cover for Interview Magazine’s American Dream issue, where she spilled the beans on her future plans to get back on our screens, setting her sights on a Marvel role.

When asked if she would consider giving acting another go after her much-publicized stint hosting Saturday Night Live last October – and her unforgettable role in Disaster Movie – she explained that she has reprised her voiceover role as Delores in the upcoming Paw Patrol movie.

‘Would I act? I would if something fun came about,’ she replied. ‘Maybe a Marvel movie, that would be so fun to do. I’m not actively looking, but I think things just come when they’re supposed to.’

Meanwhile, Bimini opened up to Metro.co.uk earlier this year about the drag scene, saying: ‘I’ve been lucky that the drag scene in the east has always been very alternative, but also accepting of people that aren’t your standard view of drag.


MORE : Kim Kardashian only has nice things to say about ‘cutie’ ex Pete Davidson: ‘He’s literally such a good person’