Camilla’s poignant tribute to the Queen in Edinburgh 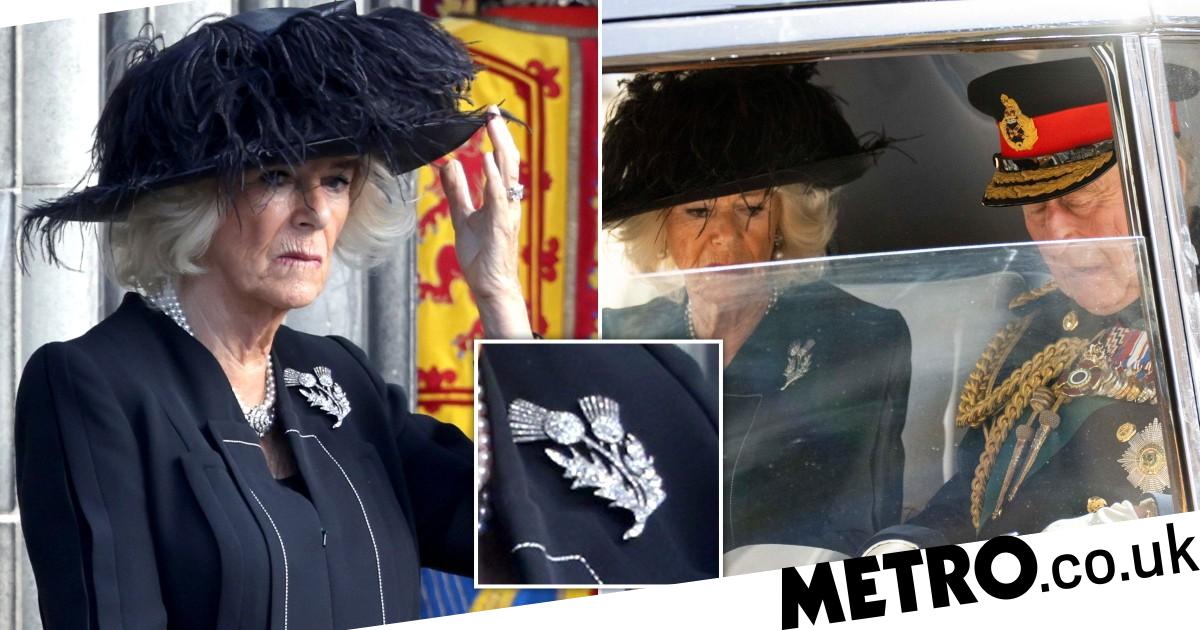 The 75-year-old donned a diamond thistle brooch as she accompanied her husband, King Charles, on duties in Scotland.

As viewers across the world watched the service of thanksgiving at Edinburgh’s St Giles’ Cathedral, they realised that Camilla’s choice in brooch had a poignant meaning.

The late Queen gave the glittering piece, which depicts two thistles, to her daughter-in-law.

It is believed to have belonged to the Queen Mother, and has been worn by Camilla on a number of occasions, particularly for visits to Scotland.

She choose the heirloom – a nod to the Scottish national flower – for her mourning outfit today.

King Charles had, with his siblings and wife by his side, today overseen the latest journey of the Queen’s coffin.

The new monarch led the Royal Family in a poignant procession behind his mother’s casket as it made its way to St Giles’ Cathedral in Edinburgh.

Mourners bowed their heads in silence as the Queen’s lead-lined English oak casket – made for the late monarch 30 years ago – slowly moved along the Royal Mile.

The King later quoted Robert Burns as he spoke to MSPs in Holyrood for the first time as monarch.

Charles paid tribute to his late mother, who he said he was ‘determined’ to emulate in her service to the country.

‘Few hearts like her with virtue warmed, few heads with knowledge so informed.’

The quote was taken from Burns’ Epitaph On My Own Friend.

This evening, Princess Anne, Prince Andrew and Prince Edward again joined the new King to flank their mother’s coffin in the Vigil of the Princes.

Each positioned themselves at a corner of the casket to stand guard, as is tradition.

The Queen Consort and Countess of Wessex sat on seats opposite the coffin while the vigil took place this evening.

Liverpool: Family of woman shot dead vow for justice on her 29th birthday