Carlos Alcaraz: Meet the US Open champion compared to Roger Federer – and salad 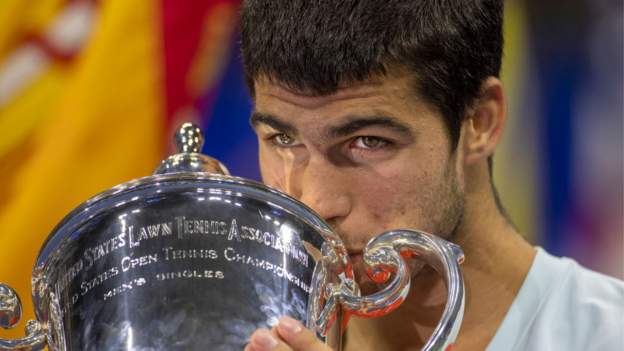 He has been compared to Roger Federer by his coach. And his mix of talents, according to Rafael Nadal, are like the ingredients of a good salad.

There are many ways to describe Carlos Alcaraz – but there is no doubt that the Spaniard has arrived at the top of world tennis.

Having won the US Open on Sunday, the Spaniard has now become the youngest world number one in the history of men’s tennis.

The 19-year-old is also the youngest male Grand Slam champion since compatriot Nadal won the French Open in 2005.

BBC Sport looks at where he came from, his rapid rise – and asks: How good can he become?

Where has Alcaraz come from?

Born in Murcia, Alcaraz was always likely to play tennis – as his father, Carlos senior, was academy director at a club in the city.

However his talent soon turned heads, and in 2018 he began playing at an academy run by Spain’s former French Open champion and world number one Juan Carlos Ferrero, who has since become Alcaraz’s coach.

The young hopeful was 16 when he made his ATP main draw debut in February 2020, at the Rio Open. He defeated tour veteran Albert Ramos Vinolas in round one: the tennis world took note.

In the two and a half years between that win in Rio and his Grand Slam title triumph in New York, Alcaraz firmly established his reputation.

He won the Next Gen ATP Finals towards the end of 2021, then broke into the world’s top 20 in February as he became the youngest winner of an ATP 500 event by taking the Rio Open title.

More success followed quickly. There was a first Masters 1,000 semi-final in March – where he was beaten at Indian Wells by Nadal. Then came a first Masters title in April as Alcaraz, then still 18, became the youngest Miami Open men’s champion.

There was more glory, and more history, before the month was out. In winning the Barcelona Open – another ATP 500 event – the teenager became the youngest player to break the world men’s top 10 since Nadal in 2005.

In May, he won the Madrid Open for his second Masters 1,000 crown and his fourth title of the year – again becoming the tournament’s youngest champion.

He lost in the French Open quarter-finals and the last 16 at Wimbledon, but in late July became the second-youngest player in the 21st century to be ranked in the world men’s top five, after Nadal.

Then came the US Open. On his Flushing Meadows debut last year, Alcaraz reached the quarter-finals – the youngest man to do so in the Open era, and at any Slam since Michael Chang at the French Open in 1990.

The success has been financially rewarding too: His rapid rise has earned him more than $9m (£7.8m) in prize money.

What has been said about him?

Coach Ferrero said: “I think he’s on 60% of his game. He can improve a lot of things. He knows and I know that we have to keep working. To get to the number once, it’s not done.”

In 2020, he compared Alcaraz to Novak Djokovic and Roger Federer, adding: “They like to be aggressive from the baseline and they can go to the net to finish the point.”

Rafael Nadal, after facing Alcaraz in May 2021 said: “When you make a salad and you are putting ingredients inside the salad, he has plenty of ingredients to become a great player.”

BBC tennis correspondent Russell Fuller said: “There is something quite frightening for the rest of men’s tennis about how good the 19-year-old is already. He has lightning-quick feet, power, touch, stamina and the self-belief that can turn matches at their pivotal moments. If that is not enough, he also looks to be a natural serve-volleyer.”

How does his rise compare to other greats?

At 19 years and four months, Alcaraz is the youngest number one in ATP ranking’s 49-year history. He beats Australia’s Lleyton Hewitt, who was 20 years and nine months when becoming number one in November 2001.

Nadal was the youngest of those to become number one, aged 22 in August 2008. Federer was also 22 when he first topped the charts, Djokovic was 24, while Murray had to wait until he was 29.

Daniil Medvedev rose to the top earlier in 2022, and the 26-year-old will be a tennis force for years. But Alcaraz looks like something else.