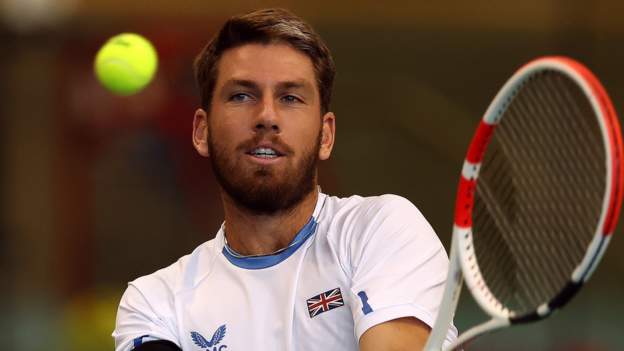 Great Britain start their Davis Cup Finals campaign against the United States in Glasgow on Wednesday as the competition’s group stages begin.

GB will face the USA, the Netherlands and Kazakhstan in Group D for a place in the November Finals in Malaga.

Cameron Norrie, Dan Evans, Andy Murray, Joe Salisbury and Neal Skupski will compete for Britain, who have won the event 10 times, most recently in 2015.

A minute’s silence will take place at the start of each day’s play as a mark of respect following the death of Queen Elizabeth II, while the British team will wear black armbands or ribbons and the national anthem will be played.

Although some sporting events have been cancelled in the period of national mourning, the Lawn Tennis Association said it believed that “sport has an important role to play in bringing the country and communities together, not least in difficult times”.

Great Britain have four players ranked inside the world’s top 50 in singles, but only three are in Leon Smith’s squad for the men’s team event, with Jack Draper absent after picking up an injury during the US Open.

Wimbledon semi-finalist Norrie is up to eighth in the rankings, with Evans 25th and Murray 43rd, while Salisbury and Skupski are ranked first and third respectively in the men’s doubles standings.

Salisbury and American partner Rajeev Ram defeated Skupski and Dutchman Wesley Koolhof in the US Open final last week, and both could face their respective team-mates in the group stages.

Great Britain, who reached the quarter-finals of last year’s Davis Cup, won the trophy in 2015 when three-time major champion Murray helped end a 79-year wait for a 10th title.

How does the Davis Cup work?

Described as the ‘World Cup of tennis’, 148 nations entered the 2022 Davis Cup before qualifiers took place earlier this year.

This week 16 nations will aim to qualify for the Finals – being held in Malaga from 22 to 27 November – by finishing in the top two places in their group.

Each nation plays two singles matches and one doubles against their group opponents in a best-of-three sets format. As well as Glasgow, the other host cities for the group stage are Bologna, Hamburg and Valencia.

Malaga will then host the quarter-final stages onwards over a six-day conclusion to the competition.

After beginning against the USA – who have lost Frances Tiafoe following his run to the US Open semi-finals – GB play the Netherlands on Friday before finishing their campaign against Kazakhstan on Sunday.

However, Spain’s Group B opponents Serbia will be without 21-time Grand Slam champion Novak Djokovic, who has withdrawn.

Germany’s Alexander Zverev will no longer make his return from the injury he sustained at the French Open after a setback in his recovery.