England show the game is about glory in remarkable Test summer 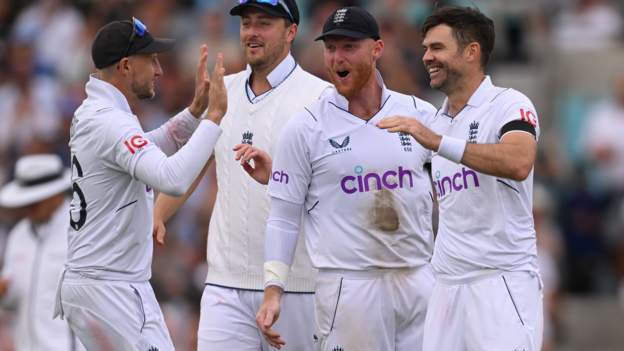 Is sport only about winning?

Tottenham Hotspur great Danny Blanchflower once said: “The great fallacy is that the game is first and last about winning. It’s nothing of the kind.

“The game is about glory. It is about doing things in style, with a flourish, about going out and beating the other lot, not waiting for them to die of boredom.”

Putting aside any jokes about Spurs rarely covering themselves in glory, Ben Stokes has previously said he is a Tottenham fan.

It feels doubtful he is aware of Blanchflower’s words but, if he is, it is likely he will agree with every single one.

Clearly it is a triumph that Stokes’ England have won six Tests this summer, but of greater importance is the restoration of joy to their cricket.

Even before a ball was bowled, captain Stokes and coach Brendon McCullum were adamant that the way England played was more important than the results they produced.

They even talked about England’s style being important to the health of Test cricket across the globe.

They were right, too. England play more and travel more frequently than any other Test team, so it is key for fans to actually want to watch them.

The only problem at the time was England had won just once in 17 Tests and the only people who wanted to see them play were their own friends and family, and even they would have been forgiven for wavering.

England could have reversed their results with pragmatic, attritional cricket – Andrew Strauss took his team to an Ashes win in Australia and the top of the world rankings by demanding they conceded less than three runs an over.

But that was never likely under Stokes and McCullum, two consummate showmen who believe that sport without entertainment is pretty much meaningless.

“The messaging has been consistent about trying to entertain and ensure that people that pay money to come, turn on their TVs and listen on the radio have been entertained,” said McCullum.

“Test cricket is such an amazing game and it needs that relevance and support. Ultimately you want to get the results because that is how you are judged, but fundamentally our job is to entertain and make sure everyone goes home happy.”

England have encouraged their batters to attack as a first instinct. McCullum tells bowlers to ignore the scoreboard and instead always employ the tactic that is most likely to bring a wicket. Fielders are demanded to chase every ball all the way to the boundary, often in pairs, until the second it trickles over the rope.

The outcome has been thrilling fun, the type of cricket children fall in love with when they first encounter a bat or ball. Hit it hard, bowl it fast, throw yourself around trying to stop it.

If it is enjoyable for fans, the same can be said for the players. The likes of Stuart Broad, Jonny Bairstow and Joe Root have often been seen revving up the crowd, wins have been celebrated with an instant beer in the dressing room or all the way to a Nottingham kebab house.

“The game comes with enough pressure without me and Brendon adding any more to it,” said Stokes.

“Even in the warm-up, we’ll say ‘You do want you want to do, just be ready for 11am’. We’ve all played enough cricket to know what we have to do to get ready. You don’t need to be out doing hamstring stretches and shuttle runs.”

It sounds simple, and it is. Stokes and McCullum have put unflinching faith in their players and given them a clear mandate to play without fear of failure.

But there is nuance and attention to detail, too.

There was cricketing logic in England’s preference for batting second earlier in the summer, when flat pitches and a soft batch of cricket balls aided some incredible, record-breaking run chases.

Jack Leach has played every Test this summer when previous regimes would have been tempted to occasionally leave out the spinner in favour of an all-pace attack – as a result he has become established as England’s number one. Rest and rotation of the seamers has been ditched in favour of playing the strongest team available.

Ollie Robinson returned and took the new ball ahead of Broad, using it to maximum effect. Even something as frivolous as Broad’s yet-to-be-seen role as the ‘Nighthawk’ – a licence to attack if a wicket falls late in the day – has resulted in a renewed emphasis on Broad’s batting and his most runs in a home summer since 2015.

Perhaps most impressively, England were able to adapt and channel their positivity when needed.

The second-Test win over South Africa at Old Trafford, when they bowled the Proteas out twice in two contrasting sets of conditions either side of racking up 415-9 when batting was difficult, proved to be their best performance of the summer.

England’s challenge is to distil their approach into something that can be consistently successful, especially overseas, while at the same time remaining committed to entertaining the crowds.

Like everything else to do with this England team, Stokes himself is the personification of that challenge.

At times it felt like Stokes had decided how he was going to bat well before he got to the middle, regardless of the state of the game. The recklessness was often too extreme, but, when he gave himself a chance at Old Trafford, he scored a century and still went at a run a ball for the second 50 runs.

More widely there are still questions hanging over opening pair Zak Crawley and Alex Lees, who will probably be itching to get out of the tricky English conditions to play anywhere that presents less new-ball danger.

Given the trip to Pakistan is followed next winter by five Tests in India, England need another spinner to go alongside Leach – Moeen Ali will probably be a temporary solution – while the question of extra pace remains. Can England get some, or at least one, of Mark Wood, Jofra Archer, Olly Stone or Jamie Overton fit?

This summer has restored some much-needed good will towards the England Test team. They have put credit in the bank not only by winning, but the way they have won. They will be afforded a little leeway if and when things go wrong, as most fans can appreciate what they are trying to achieve.

The game is not just about winning, it is about glory.

The Ashes loom next summer. Perhaps winning and glory will go hand in hand.