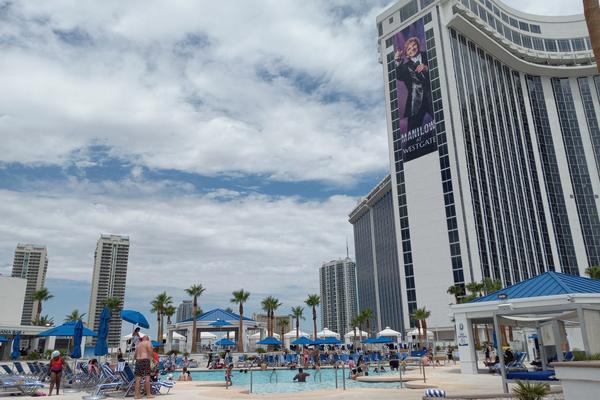 When tourists talk about the city, many are referring to life on the Las Vegas Strip. While there’s always something to do on the city’s main line to the most recognizable sights, it must be said that Vegas has equal amounts of entertainment away from the strip. You just have to know where to go.

This is where Westgate Las Vegas Resort & Casino comes into play. Located a short monorail ride from the strip (and adjacent to the Las Vegas Convention Center), Westgate offers the tourist experience while also providing high-quality service through a myriad of accommodations. From a first-class casino to well-respected restaurants and everything in between, Westgate scores big from top to bottom.

A quick history lesson about Westgate: It opened in 1969 as the International Hotel. Many locals knew the resort as the Las Vegas Hilton. With 2,900-plus rooms, it was identified as the largest hotel in the world in the 1980s and early 1990s. What’s great about the Westgate is that you’d never know the facility is over 50 years old. The building is well-kept, and it successfully balances new-age technological changes with maintaining some of the original decor that makes it a must-see.

Any Elvis fans out there? Elvis Presley’s legacy is throughout the Westgate campus. He often resided in a suite on the 30th floor — once called the Imperial Suite but renamed the Elvis Presley Suite after his death. Elvis also has an inside statue near the front of the hotel.

Westgate recently hosted a “Bet on Boys Weekend” tour, which allowed a handful of individuals to tour the campus, eat at several revered restaurants, lounge by the pool, take in shows, learn the art of gaming and drink (and learn how to make) some of the finest cocktails. The resort partnered with The Zimmerman Agency for the three-day presentation.

The press tour included stops at three magnificent restaurants: Edge Steakhouse, Fresco Italiano and Benihana. Westgate houses other restaurants that also have earned accolades from a variety of sources.

Edge is extremely popular for so many reasons. The service was excellent, the food delicious, and the ambiance was amazing. Edge features prime cuts, as well as domestic Wagyu beef. It has one of the most succulent filet mignons I’ve ever eaten. And for all of the Elvis fans, there’s a specific room in the facility where he always privately dined.

Fresco Italiano takes you to the heart of Italy with its culinary creations ranging from osso buco to bone-in veal chop parmigiana. It is considered the No. 1 rated Italian restaurant in Las Vegas. Part of that is because of the outstanding service. A special tip of the hat to Michael Baker, who is one of the greatest servers anyone could ever meet — and I mean that with all sincerity. If you weren’t in a good mood when you arrived, you’ll be in a great mood when you leave.

Benihana is a world-famous chain with its Japanese menu and food preparation performances by its skilled chefs, but a trip to the restaurant on the Westgate campus is one consumers will never forget. The massive two-story establishment with features a beautiful, intimate setting to go along with a stellar array of food options.

Song and Dance for All

Westgate features a variety of shows, and if you enjoy good music, two shows set the bar at the Westgate Cabaret, a 400-seat pavilion. “The Bronx Wanderers” satisfies the rock and roll genre from multiple generations. “Soul of Motown” honors the many legends from the iconic Motown era.

The Bronx Wanderers is a family band led by Vinny Sr., a former record producer and label executive. He and his son, Vincent John, team up with John’s childhood friends Fernando Tort, Michael Benigno and Joe Bari to provide high-energy covers for some of the most well-known tracks of the 1960s and beyond. They all represent the Bronx, New York, well and showcase their talents by playing multiple instruments.

Soul of Motown is a tribute with a twist. The songs of Motown are captured by the soulful stylings of husband-wife tandem Brandon Godfrey and Sean Stewart Godfrey, as well as the super-smooth duo of crooners C.J. Williams and Mo “Big Sexy” Crosby. The group delivered an electric performance that included pitch-perfect harmony (Williams showed a range from countertenor to bass), exceptional choreography and, most importantly, plenty of audience participation.

The International Theatre is Westgate’s main entertainment venue. Since 1969, the biggest stars — singers, comedians and musicians — would perform up to two shows a day for a residency.

Trivia: Name the first superstar to perform at the International Theatre. If you guessed Elvis, you’re wrong. While he was the second performer, Barbara Streisand is the correct answer. James Brown, Perry Como, Danny Kaye, Don Ho and Louis Armstrong are among the many who also performed at the historic venue.

Since 2018, Barry Manilow has hosted a residency at the International Theatre, which seats roughly 1,600. Manilow’s “The Hits Come Home” is a must-see for music lovers of all ages. Fifty top-40 hits and 85 million albums sold (and counting) don’t lie.

The multiple suites and villas at Westgate are easy on the eyes — and also come in a variety of styles. From a view of themed suites, there are several rooms that can be pleasing to consumers at first glance.

Among the many choices are the Silver Suite, the Bedroom Suite and the Santa Fe Suite. Las Vegas Raiders fans would enjoy the layout of the Silver Suite, a room with a silver and black theme designed to resemble the sports fan’s cozy getaway. A look at the Bedroom Suite gives immediate vibes of the most sultry boudoir — including the circular bed. The Santa Fe Suite will win over a lot of people with its Western vibe. Think of the TV series “Yellowstone.”

While at the Mediterranean Villa, a 5,000-square-foot suite that has hosted many famous guests, the “Bet on Boys” group was treated to a cocktail reception that featured Buffalo Trace bourbon tasting. The villa is on the 29th floor, which is accessible only by way of a special room-key entrance.

Looking to swim? Westgate has a five-acre pool deck. Wanting other ways to relax? The resort features six tennis courts (pickleball also is available for those inquiring), a 10,000-square-foot spa and a fitness center. And, of course, there’s gambling: Nearly 55,000 square feet of space and opportunity to win. The SuperBook, Westgate’s race and sports book, is billed as the largest in the world.

Westgate’s website says its highest priority is “providing the ultimate guest experience and customer service to guests.” From customer service to amenities and activities, Westgate checks all of the boxes. And it does so as a 53-year-old hotel constantly and successfully adapting to modern design and technology.