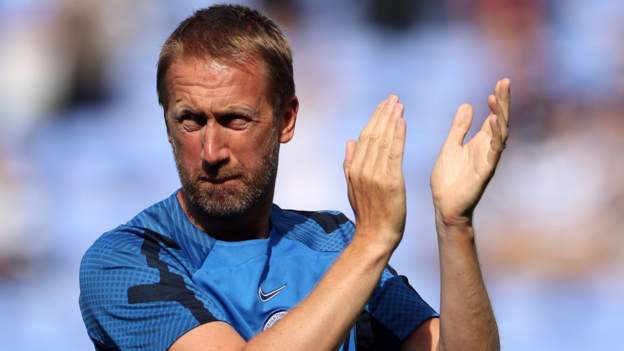 Ex-Swansea and Ostersunds FK coach Potter, 47, has been given permission by the Seagulls to talk with Chelsea.

Tuchel was dismissed after losing the confidence of Chelsea’s players and the new ownership, who took over at the club in May.

Potter, who has been tipped as a future England boss, has led Brighton to fourth in the table this season after winning four and drawing one of their six Premier League games.

He was appointed in May 2019 and has led the club to 15th, 16th and ninth-place finishes in his three seasons in charge.

But his brand of attacking and tactically flexible football has brought him many admirers in the game.

“I found it a strange decision [to sack Tuchel] when I heard it this morning. It’s baffling but that’s management, I’m sure he’ll move on to another top club.

“But for me now, they need to go for Graham Potter. He’s the perfect manager for them.”

They were sixth in the Premier League after three wins, one draw and two defeats when they parted company with Tuchel.

The decision to sack the German would have been taken regardless of their 1-0 defeat in their opening Champions League game at Dinamo Zagreb on Tuesday, BBC Sport understands.

Chelsea plan to make a swift appointment and Potter was among the bookmakers’ favourites to take over, along with former Spurs and Paris St-Germain boss Mauricio Pochettino, former Real Madrid manager Zinedine Zidane and current Leicester manager Brendan Rodgers.

In terms of their search for Tuchel’s replacement, the Blues are also believed to be looking for a long-term manager who shares their vision for a collaborative culture and who will focus on development of all players in the squad.

Brighton have always been quite relaxed when it comes to succession planning.

They feel the club is run in such a sensible way, they always have an answer.

Owner Tony Bloom didn’t flinch when Newcastle came for director of football Dan Ashworth in the summer, and it is likely to be the same now.

However, there is bound to be a bit of apprehension.

Graham Potter has taken Brighton into uncharted territory with a progressive brand of football.

It is scarcely believable that it is less than 12 months since Brighton were booed by their own fans during a goalless draw against Leeds.

Since then they have recorded their highest ever league finish, won at Manchester United for the first time and currently sit fourth in the Premier League, splitting the ‘big six’. Progressing from there is not easy.

Potter once told BBC Sport that he was resigned to never being a high profile manager when at the time he was being linked with Everton.

“It is hard to be a sexy name when you are called Potter, especially if your first name is Graham. Then it becomes even more difficult to be sexy,” he said.

“Add into that a long face and a ginger beard and all the rest of it and I just have to stick to being a football coach and work with the players.”

He added: “The mistake is often to think you are better than you are and can succeed in any environment,” he added. “That is not the case.

“I am ambitious. I want to succeed. But I am no magician. I need help. To be successful as a coach, you need good people around you – staff, board, CEO, the strategy of the club, the structures around it, the players.”

Brighton will be relaxed if Potter does leave the Amex Stadium but the decision over who comes next would be a massive test of their recruitment.

Former Chelsea and England manger Glenn Hoddle, a pundit on BT Sport’s coverage of Tottenham’s Champions League game with Marseille on Wednesday, said Potter needs to ask Chelsea about their long-term strategy before accepting the job.

“My first question would be, is it a longer-term scenario?” said Hoddle.

“Is there another project where they are going to buy young players, send them out on loan and then bring them back to Chelsea to be Chelsea players, or is it result-orientated?

“Or in three months’ time, ‘if I have a bad run are you going to stick by me?’ Those are the questions I would be asking.

“There are two different ways of working as a manager. Fans will put you under pressure if you lose games, of course they will, but if they are doing this with Tuchel now they have to have a plan in their mind for the future.

“They can’t say to a manager you’re going to sack them in six months’ time if you put younger players on the table.

“Chelsea bring loads of young players through the academy and they go out on loan and then sell them for £8m-£12m, but it doesn’t look they are going to look at that, they are going to bring players in for £12m-£20m and make them into £70m players but playing for Chelsea, and that is a different project for the manger.”

Former Bayern Munich and England midfielder Owen Hargreaves added: “He [Potter] is an exceptional manager, he’s done a brilliant job at Brighton, but the only question is would he want to go there with the way they are sacking mangers, including a Champions League-winning one, as a young manager, would he want that?”