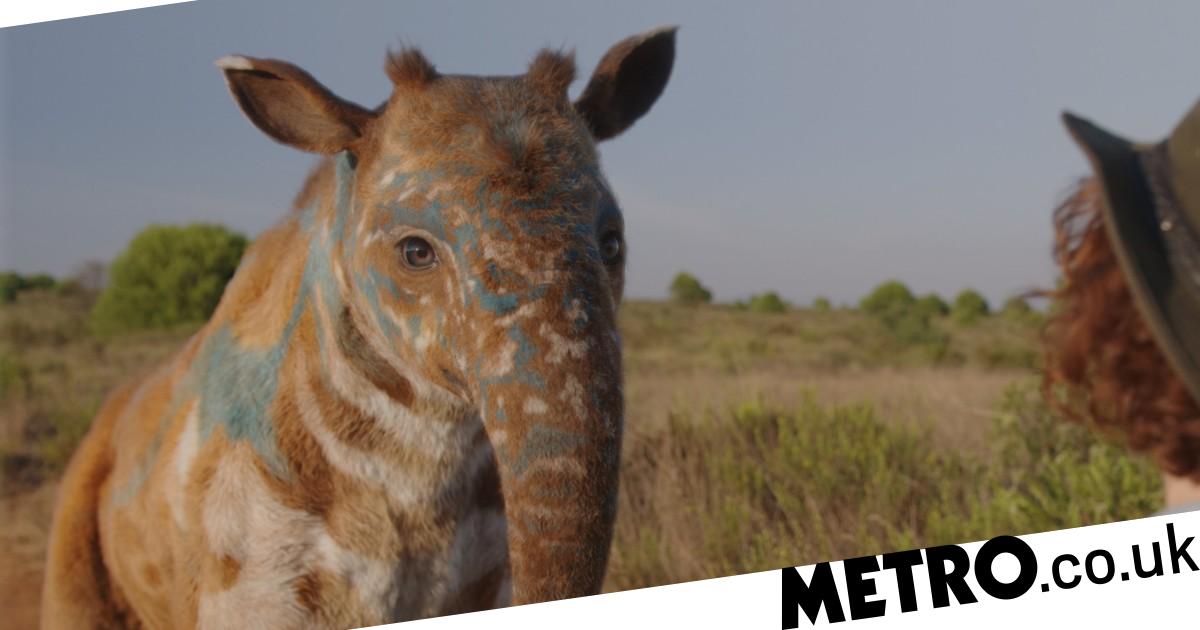 When His Dark Materials returned for season 3 – adapting the final book in Sir Philip Pullman’s trilogy, The Amber Spyglass – there was one particular element from the tale that fans were especially curious to see brought to life on TV.

The tale sees Dr Mary Malone (Simone Kirby) travel to a world inhabited by creatures called Mulefa, who are highly intelligent, speak their own language and have the ability to see Dust (particles associated with consciousness) with the naked eye.

In the books, the Mulefa are described as being spineless, having diamond-shaped skeletons, trunks and claw-like hooves that they latch onto large, circular seed pods, allowing them to travel by wheeling themselves around.

During a recent conversation with Metro.co.uk, visual effects supervisor Russell Dodgson of Framestore explained why certain changes were made to the design of the Mulefa when adapting them for TV, as while they retained familiar attributes such as wheeling around on the seed pods, they didn’t have their diamond-shaped skeleton from the novel.

Recalling the input that Sir Philip had when discussing how the Mulefa would be translated for the third season of the BBC show, Russell said: ‘I’m pretty sure that Philip’s main angle was he really insisted and wanted them to still roll around on the seed pods. He wanted that aspect of them, and their symbiosis with nature. That was really important to him.

‘I think the minute details about how he described them was less important to him, but more their general overall theme and appearance.’

Russell explained that conversations were had with production designer Joel Collins about how the Mulefa were described in the book as having a diamond-shaped skeleton.

‘That one sentence, which sounds cool, could really derail the authenticity of the creature or character for the rest of the show. So we decided that we weren’t going to try and come up with exactly that, because at the same time they were meant to be elegant. They were meant to be beautiful and seem super intelligent,’ he outlined.

‘We didn’t want everybody to be distracted by unorthodox weird movement, so that you couldn’t land the other bit, which feels more important.’

The design that the team came up with for the Mulefa combined the look of a tapir with a prehistoric mammal, which had longer front legs and shorter back legs, and therefore offered a ‘slightly different way of moving, but isn’t exactly what was put in the books’.

Russell added that they knew that they didn’t want the seed pod wheels to be ‘giant’, opting instead for them to be small enough to fit in a person’s hands.

The crew collaborated with a zoologist who specialises in prehistoric animals, who went on a ‘deep dive’ figuring out the ‘mechanics’ of how the Mulefa would move, such as ‘how the shoulder planes would move, what kind of spine structure it would have, where the muscles would be and how everything would work’.

‘A big thing for us is authenticity. You very quickly have to fall in love with a character and believe that they’re real. So we always want something that’s authentic and grounded so that the audience can get there quickly,’ he stated.

The visual effects supervisor admitted that the most challenging part of introducing the Mulefa into the His Dark Materials series was less to do with the execution, and more to do with the timeline of the story.

‘Mary Malone’s story in the book has a very different timeline to everyone else’s timeline in the story. Everybody else’s timeline feels day to day and she feels like she’s there for about three years,’ he said, referencing Mary’s time in the Mulefa’s world.

‘So it was hard to find the way to fit that story and get the essence of it into the show without interrupting the rhythm of everything else. We spent a lot of time trying to work that out.’

Russell – who directed complex sequences of His Dark Materials season three, including Mary meeting the Mulefa – said that he doesn’t look ‘too hard’ at fan reactions online, as he feels ‘very confident in the idea that the creative endeavour of adapting a book to television, as long as it’s done with love and passion, is all you can do’.

‘If people want something different, then I will really look forward to watching their version of it. But everything I have heard, seen or had people speak to me – and I have looked at some reactions – has all been very positive,’ he added.

The creative director of TV at Framestore said that he finds it ‘enjoyable’ reading discussions on forums among fans about deviations from the source material, ‘because it means people care’.

‘So even if people criticise aspects of the show because they veer away from the book, it’s all very valid. We made our choices to make our adaptation with as much passion as we could with the resources that we had. If you don’t do that with confidence and pride, then what are we doing?’ he added.

At the London premiere of His Dark Materials season three, writer Jack Thorne stressed to Metro.co.uk how important the depiction of the Mulefa was to Sir Philip.

‘There was a way that they had to be, and that way was very, very difficult to pull off. But it really mattered to Philip, for all sorts of different reasons,’ he said.

Mary actor Simone recently opened up to Metro.co.uk about what it was like to film the Mulefa scenes, as she hadn’t previously worked much with puppeteers on the production.

‘We tried to work out how we’d move around each other and not bang into each other. I had to keep in mind that I’m just seeing the head but there’s this huge body behind it as well, so I can’t walk through it. There was a lot of rehearsal, a lot of working out to do,’ she recollected.

His Dark Materials returns tonight at 7pm on BBC One and is available to watch on BBC iPlayer.


MORE : His Dark Materials’ Dafne Keen addresses possibility of making return as Laura from X-Men movie Logan – and our adamantium claws are crossed in hope

Victoria Beckham under fire for ‘false no makeup claims’