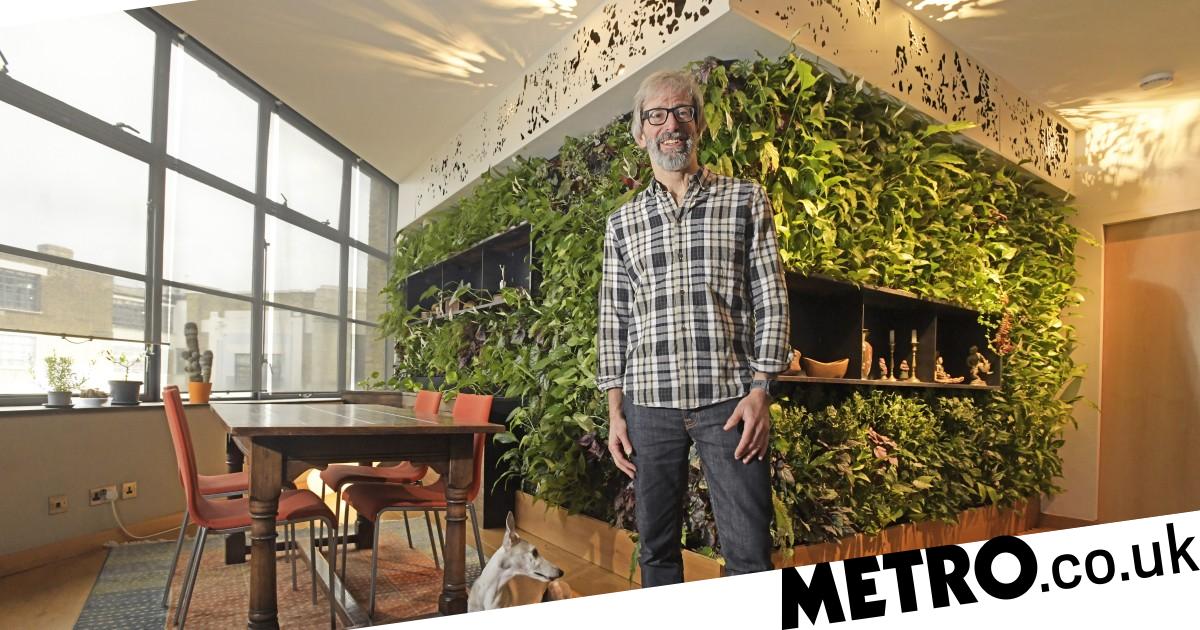 Jim Hurlin spent the summers of his American childhood happily exploring the wilderness of New Hampshire during visits to see his grandmother.

Decades later at his London home, he wanted to somehow recreate the feeling of being immersed in New England nature.

But the property he chose, in 2002, was a warehouse flat in Spitalfields with no outside space. ‘When you look out of the window it couldn’t be more urban,’ says Jim. ‘I don’t see a single tree, and there isn’t really much green space nearby.’

Undeterred, he has found a way to bring the outside in. The centrepiece of his two-bedroom apartment is a green wall in the open-plan kitchen/living room.

It is home to up to 1,200 individual plants that are nourished and watered by an inbuilt irrigation system. Jim, 62, was an early adopter of east London living, and when he bought his flat, it had been fairly recently converted and was in good, if uninspiring, condition.

‘I always wanted a natural element to it, but I didn’t know how it could be done,’ he says. ‘I spent years hemming and hawing about it. I spent summers in New Hampshire with my grandmother. I’ve a place there, and I love being among the wildlife there.’

He hired Tom Raymont, director of Arboreal Architecture, who came up with the idea of smothering a section of the space with a living wall with floor-to-ceiling pockets cut into it for plants to grow, with a system of pipes to deliver water and nutrients to them. Integral shelves, built from oiled mild steel, complete the effect.

Green walls have become relatively commonplace outdoors – the Athenaeum Hotel & Residences in Mayfair has ten storeys of planting while, in the City, the Sky Garden at 20 Fenchurch Street – better known as the Walkie-Talkie tower – has some 700 square metres of green wall.

Jim’s home renovation was completed in 2012. As well as the green wall, Tom redesigned the kitchen and bathrooms and added lighting panels laser-cut with shapes to mimic the effect of sunlight coming through treetops in the heart of a forest. ‘It is a bit of a labour of love,’ Jim admits.

You can now buy green walls ‘off-the-peg’ but the concept was in its early days when Jim’s project began.

His wall had to be dismantled and rebuilt thanks to a problem with the watering system, while finding plants that would flourish in varying light conditions – and in small pockets of growing material – was trial and error.

‘Some really grew well, and some didn’t,’ says Tom. ‘It took time – but they showed us what they wanted.’

With feeding and watering taken care of automatically, the wall is relatively easy to maintain. Dead leaves need to be removed and fast-growing plants pruned back.

‘I love looking at it and when you walk past in the summer there is a kind of coolness to it,’ says Jim.

‘Being around plants is very relaxing. During the pandemic it was my Zoom background and people couldn’t believe it was real.’


MORE : What I Own: Property developer Mark, who bought his Devon home for £1.15million


MORE : How to prepare your plants for cold weather

Get all the need-to-know property news, features and advice from Metro every week.