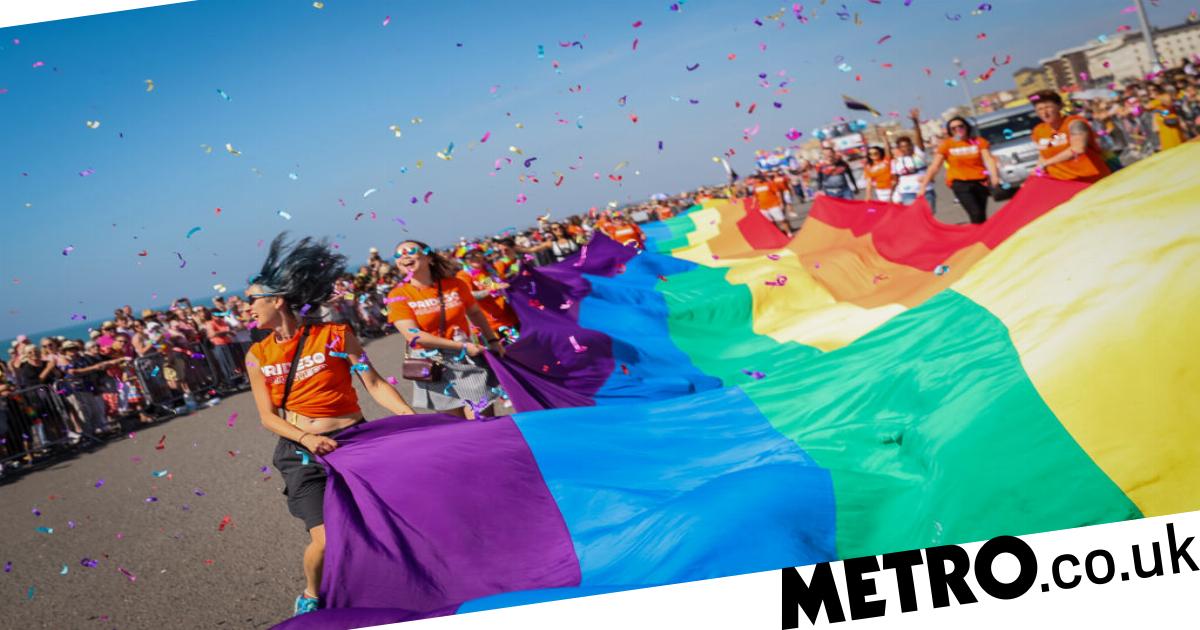 The sight of a giant rainbow Pride flag, dancing in the wind as part of the Platinum Jubilee pageant earlier this year, was certainly cause for celebration for many LGBTQ+ people.

Such a royal recognition of queer culture was not only a nod to 50 years of Pride, but also a moment that marked a shift in the changing relationship between the palace and the LGBTQ+ community.

‘It was the first time that we had been included in a Royal parade, and it was amazing to see that acceptance, especially in a celebratory way as part of such a significant occasion’, explain Yasmin Benoit, who works with LGBT charity Stonewall, and describes the People’s Parade as ‘a tribute to the changing culture of the UK’.

‘That’s what we kept talking about on the day, how much of a great moment it was and how it never would have been allowed in the past.’

Benoit, an openly aromantic-asexual Black woman, ‘never imagined’ that she’d ever be asked to take part in such a momentous occasion, calling the experience ‘an honour’ as she walked alongside pioneering members of the community.

‘We waved our progress flags as we went past the Royal Family and thousands of others, broadcast to millions,’ she adds. ‘It’s something we wouldn’t have been able to do if it wasn’t approved by the Queen.’

After reigning for 70 years, Queen Elizabeth II has been witness to the changes for the LGBTQ+ community in ways no other ruler has.

When she ascended to the throne in 1952, it was a time when homosexuality was still illegal in the UK and remained as such until 1967.

Fast forward to 2022, and LGBTQ+ rights – although with plenty work left still to be done – have advanced in once unimaginable ways.

It is customary for the monarch and other Royal Family members to remain ‘politically neutral,’ meaning the Queen avoided making public comments on LGBTQ+ issue for much of her career.

However, she did express her support for the community on a number of occasions, both through her public addresses and by giving royal assent to laws that have advanced LGBTQ+ equality.

It has been widely rumoured that when the Queen signed the royal assent for the 2014 Equal Marriages Act, which allowed members of the LGBTQ+ community to legally marry, she said: ‘Well, who’d have thought 62 years ago when I came to the throne, I’d be signing something like this? Isn’t it wonderful?’

Following her death, Nancy Kelley, CEO of Stonewall, said: ‘We send our deepest condolences to the Royal Family on the passing of Her Majesty Queen Elizabeth II. At this sad time, we reflect on the end of a very significant era for the UK.’

Meanwhile, HIV and sexual health charity Terrence Higgins Trust praised the Queen’s ‘immense support’ for charities and good causes and in the fight against HIV stigma.

Chief executive Ian Green said: ‘Her immense support for charities and good causes has been a hallmark of her reign. She has worked to tackle HIV stigma and support HIV care through her domestic and Commonwealth duties. Whether it is meeting a London-based patient with an AIDS-related illness in 1989, opening the Mildmay HIV Centre in Kampala, Uganda in 2007, or visiting an AIDS memorial garden in 2015, she has taken her message of compassion to a global audience time and again.’

While the Queen never uttered the words ‘gay’, ‘lesbian’, or ‘transgender’, or the acronym LGBT, many people within the community feel that she instead conveyed her solidarity with LGBTQ+ people via her actions.

It was a slow burn though, with the first time the Queen addressed LGBTQ+ issues being in 2003  – 50 years after she’d taken to the throne – when she mentioned in her speech at the opening of Parliament that her government (Tony Blair was Prime Minister at the time) would ‘commit’ to legalising civil partnerships.

‘My Government will maintain their commitment to increased equality and social justice by bringing forward legislation on the registration of civil partnerships between same-sex couples’, she said.

On December 5, 2005, the Civil Partnership Act 2004 came into force, allowing same-sex couples aged 16 and over to recognise their relationships with legal status, before legislation to allow same-sex marriage in England and Wales was passed in 2014.

Then, in 2013, the newly agreed Commonwealth Charter was signed by Queen Elizabeth at a reception to mark Commonwealth Day, stating that they are ‘implacably opposed’ to gender discrimination, without explicitly mentioning sexual orientation.

‘We are implacably opposed to all forms of discrimination. Whether rooted in gender, race, colour, creed, political belief or other grounds,’ it read.

Also in 2013, Her Majesty granted a pardon to Alan Turing following his death by suicide during her reign in 1954.

Turing has become a key figure for LGBTQ+ people following his death after he was punished by the British government for his sexuality and was chemically castrated after being convicted of ‘gross indecency’ with another man in 1954.

It cannot be ignored, however, that at the time, the Queen did nothing to prevent his punishment – and the fact it took decades for a royal pardon for the treatment he endured to be issued, with campaigners working tirelessly towards the moment.

Following the work of dedicated campaigners, the pardon was eventually granted under the Royal Prerogative of Mercy after a request by Justice Minister Chris Grayling.

‘Dr Alan Turing was an exceptional man with a brilliant mind,’ said Mr Grayling in 2013.

‘His later life was overshadowed by his conviction for homosexual activity, a sentence we would now consider unjust and discriminatory and which has now been repealed.

‘Turing deserves to be remembered and recognised for his fantastic contribution to the war effort and his legacy to science. A pardon from the Queen is a fitting tribute to an exceptional man.’

Now, the World War II codebreaker is widely regarded as the father of computer science and he became the face on the new £50 note in 2021.

It was 14 years later in 2017, that the Queen next addressed LGBTQ+ rights, while delivering her speech to Parliament.

She said: ‘My government will make further progress to tackle the gender pay gap and discrimination against people on the basis of their race, faith, gender, disability or sexual orientation.’

While it was often pointed out that the Queen was not a patron of any LGBTQ+ charities during her seven decade reign, she did on one occasion display a rare moment of acknowledgment of one charity’s work.

When one of the UK’s oldest LGBT charities, London Lesbian & Gay Switchboard, celebrated it’s 40th anniversary, she sent a concise but well-meaning message, that simply read: ‘Best wishes and congratulations to all concerned on this most special anniversary.’

Meanwhile, many of the LGBTQ community’s campaigners have also been recognised in her Honour’s List each year.

In 2017, Gary Hardman was awarded for his work with Icebreakers, a self-help group for gay and bisexual men in Manchester, alongside Gwyn Starkey, former director of Manchester’s LGBT Foundation.

When Stonewall’s chairman David Isaac, received a CBE from the Prince of Wales in 2011, he said: ‘I’m so pleased that the work of Stonewall has been marked in this way. All the charity’s successes in recent years have resulted from the efforts of tens of thousands of supporters and volunteers as well as our staff. I’m honoured to have been able to play a part in that.’

While the Queen might have been reluctant to publicly vocalise any allyship with the LGBTQ+ community, some of the key younger royals carry no such fear.

Prince William made history in 2016 when he appeared on the front cover of Attitude magazine, to discuss mental health implications of homophobic, bi-phobic and transphobic bullying.

Three years later, in 2019, the Duke of Cambridge said he would ‘fully support’ his children if they came out as gay or lesbian, but expressed anxiety around ‘pressures’ they might face from society.

Then in 2022, the new Prince of Wales voiced his support for Jake Daniels, the UK’s first active openly gay football pro in three decades.

‘Football should be a game for everyone,’ he wrote on Twitter. ‘What Jake has done takes courage and will hopefully help break down barriers that have no place in our society. I hope his decision to speak openly gives others the confidence to do the same.’

As for the Duke of Sussex, he and his wife Meghan Markle were the first Royals to honour Pride Month by sharing an Instagram post in 2019.

Prince Harry also invited transgender youth charity Mermaids to an event with his own mental health charity, Heads Together, and a gay soldier once spoke about how the Prince protected him against homophobic abuse when the Duke of Sussex acted as James Wharton’s tank commander in 2008.

‘Prince Harry went out and saw these soldiers [who were bullying him] and spoke to them, and the problem went away,’ Mr Wharton said. ‘He told them off and they left me alone.’

Meanwhile, other members of the royal family feel comfortable enough to come out – a significant step for the royals, who may have previously felt pressure to keep their sexuality under wraps.

Lord Ivar Mountbatten, the 59-year-old first cousin to the Queen, is the first openly gay royal, speaking openly about his sexuality in a 2017 interview. He married James Coyle, who he met on a skiing holiday, in 2018.

‘Being a Mountbatten was never the problem, it was the generation into which I was born,’ he said at the time.

‘When I was growing up, it was known as “the love that dare not speak its name”, but what’s amazing now is how far we have all come in terms of acceptance.’


MORE : Queues to see Queen lying in state ‘to stretch five miles and take up to 20 hours’


MORE : Queen’s beloved corgis to be cared for by Prince Andrew


MORE : The Queen and her charities: ‘Without a doubt, she was a people person’

This year marks 50 years of Pride, so it seems only fitting that Metro.co.uk goes above and beyond in our ongoing LGBTQ+ support, through a wealth of content that not only celebrates all things Pride, but also share stories, take time to reflect and raises awareness for the community this Pride Month.

And we’ve got some great names on board to help us, too. From a list of famous guest editors taking over the site for a week that includes Rob Rinder, Nicola Adams, Peter Tatchell, Kimberly Hart-Simpson, John Whaite, Anna Richardson and Dr Ranj, as well as the likes of Sir Ian McKellen and Drag Race stars The Vivienne, Lawrence Chaney and Tia Kofi offering their insights.

During Pride Month, which runs from 1 – 30 June, Metro.co.uk will also be supporting Kyiv Pride, a Ukrainian charity forced to work harder than ever to protect the rights of the LGBTQ+ community during times of conflict, and youth homelessness charity AKT. To find out more about their work, and what you can do to support them, click here.