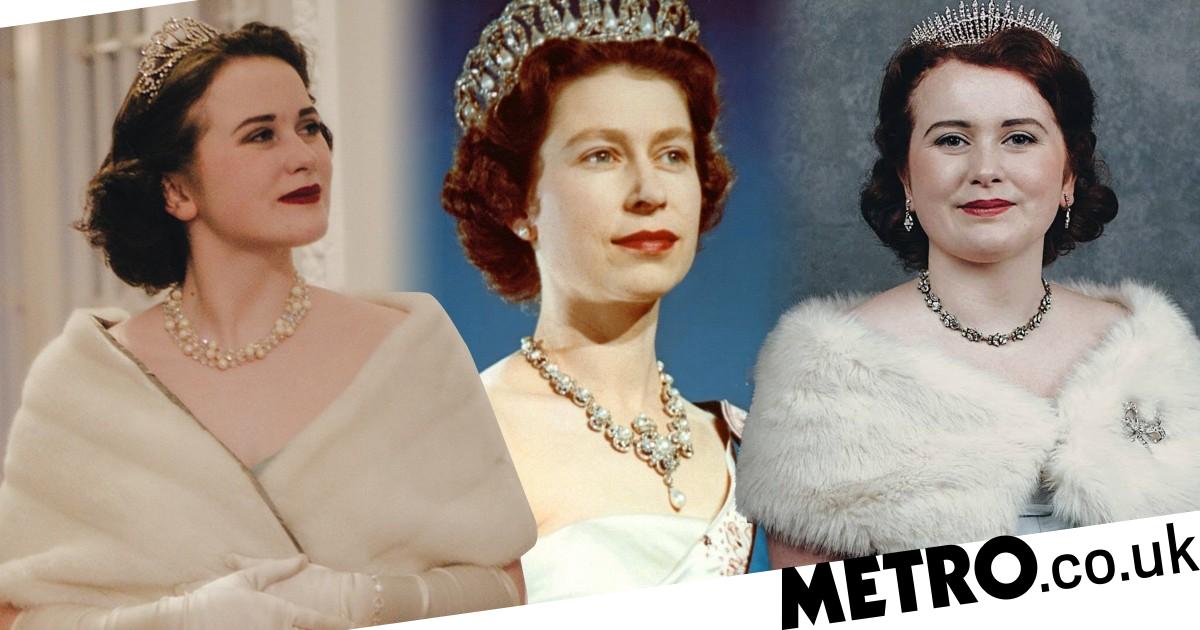 When the news of Queen Elizabeth’s death broke, I took myself upstairs – away from my friends – and then the inconsolable floods of tears began.

I thought to myself: We have lost the mother of the nation. She’s a woman I’ve grown up with, admired, seen on screen at Christmas time, but unfortunately never met in person.

I’ve also lost count of the amount of times people have told me I look like her in her younger years.

I was 16 in 2015 when friends and family first noticed my likeness to Her Majesty, following the release of the film called A Royal Night Out. It documents when Princesses Elizabeth and Margaret went out into the crowds on VE Night in 1945.

I went to see the film on its opening night, and fell in love with the story, but I didn’t really think I looked like Her Majesty.

By that point in my life, I was a World War II reenactor and vintage singer so I just thought the connection in people’s minds might be that. But slowly, people telling me I looked like the Queen became a common occurrence in my daily life.

I was even stopped in the street when I was in my early years at university by people drawing attention to the similarity between us. It always felt like an honour to be told I looked like someone I’ve always had a deep admiration for.

I wasn’t going out of my way to look like the Queen, it simply just happened.

With the release of the Netflix series The Crown in 2016, my love for the Queen grew. She was a woman who never particularly wanted the job of reigning monarch, rather, she was thrust into the limelight after the untimely death of her father, who made true her vow to devote her life to our service.

This figure, who I had always loved, became a role model to a whole new demographic of people. I believe this character (played by Claire Foy) educated the younger generations that the Queen wasn’t just a woman in a crown, she was a woman who worked hard.

The release of The Crown also brought with it more interest in the fact I looked like a young Queen Elizabeth. At the time, Claire Foy as the Queen during the first two seasons was everywhere.

It got me thinking – maybe I should seriously consider becoming a young Queen Elizabeth lookalike.

Over the course of my time as a World War II reenactor and vintage singer, I had become well acquainted with how the young queen walked, talked, and dressed.

Surrounding myself in the rich history of the 1940s and 50s, enabled me to create a persona akin to Her Majesty. So with this in mind – as well as being told I constantly look like the queen – I felt it was my duty to replicate all aspects of this incredible woman to the best of my ability.

It’s not been without its challenges though. That received pronunciation accent is the one you associate with Her Majesty, but being a Yorkshire girl, it’s surprisingly difficult to master!

For months, I carefully studied some of Her Majesty’s most famous outfits and worked from vintage patterns to recreate them. I learnt a handful of the Queen’s early speeches, and perfected that all-important royal wave. It was the busiest and most rewarding time of my life.

In 2018, I was invited by the North Yorkshire Moors Railway to sing for the 1940s Wartime weekend event, but when the organiser noticed my likeness to the young princess, he asked if I would also portray her for the event. I felt honoured.

I was whisked off to a B&B in Pickering to meet a woman who would play the Queen Mother – or the Queen as she was at the time. We were chauffeured to the main performance area in a 1930s Lanchester where the Home Guard and general public were waiting.

I took the salute, then inspected, and spoke to the members of the Home Guard. Following this, we watched drills and the parade, then we were presented with beautiful flowers from two local girls. It was a really wonderful experience, and I felt so proud to be keeping this part of the Queen’s life alive. This was the first time I portrayed the young Queen, and I loved it.

From that moment, I have worked hard on every aspect of my portrayal, to the point where I am now a professional lookalike, being paid to attend events all over the country.

Not long after, while I was looking for new vintage outfits, I came across an original Auxiliary Territorial Service (ATS) uniform. It’s the same one the Queen served in as a mechanic during the final months of the Second World War – in the exact same rank she was then. It was in perfect condition, too.

So I decided to buy it because it felt like a miracle to find one that fit like it was made for me. Putting it on for the first time, I felt closer to the Queen than I ever had – I never wanted to take it off!

In 2019, I was invited to sing at our local veterans’ café because we were having a visit from the Duke of Kent – the Queen’s cousin, Prince Edward. I went in my ATS uniform that I’d recently acquired, and His Royal Highness actually commented on the likeness between myself and the young Queen, which was a real honour indeed.

When the Platinum Jubilee crept up on us, I was invited by several organisations – from heritage railways to care homes – to attend celebrations up and down the country portraying the young Queen. I made speeches, watched concerts, and attended balls and dances.

By this point, portraying the Queen had become as natural to me as getting up and going to work. The most surreal moment of the celebrations for me was at the International Bomber Command Centre’s Platinum Jubilee Ball, where – after I made my speech – I was met with three rousing cheers, and a rendition of God Save the Queen. It really was very moving.

I look forward to hopefully portraying the young Queen for years to come, as this remarkable woman should never be forgotten.

I feel it is my duty to keep the legacy of Her Majesty the Queen alive – educating younger generations on just what an amazing job she did in her life.

The last few days have understandably been incredibly difficult, but seeing the outpouring of love for the late Queen has been heartwarming. We will never forget the amazing work she has done, and how she dutifully lived out her promise to devote her whole life to our service.

As I write this now, surrounded by commemorative editions of newspapers – and my dear books on Her Majesty – I feel a sense of profound sadness that we have lost someone who I thought would be here forever.

But we can take comfort in the fact that Her Late Majesty Queen Elizabeth II, has left behind a great legacy, and will live on in our hearts forever.

God save the King. And thank you ma’am, for everything.


MORE : Having worked with Princes William and Harry, I’m happy they’ve put differences aside for their grandmother


MORE : Royal beekeeper knocked on each hive to inform bees of the Queen’s death


MORE : How the Queen used subtle messages to express her true opinions