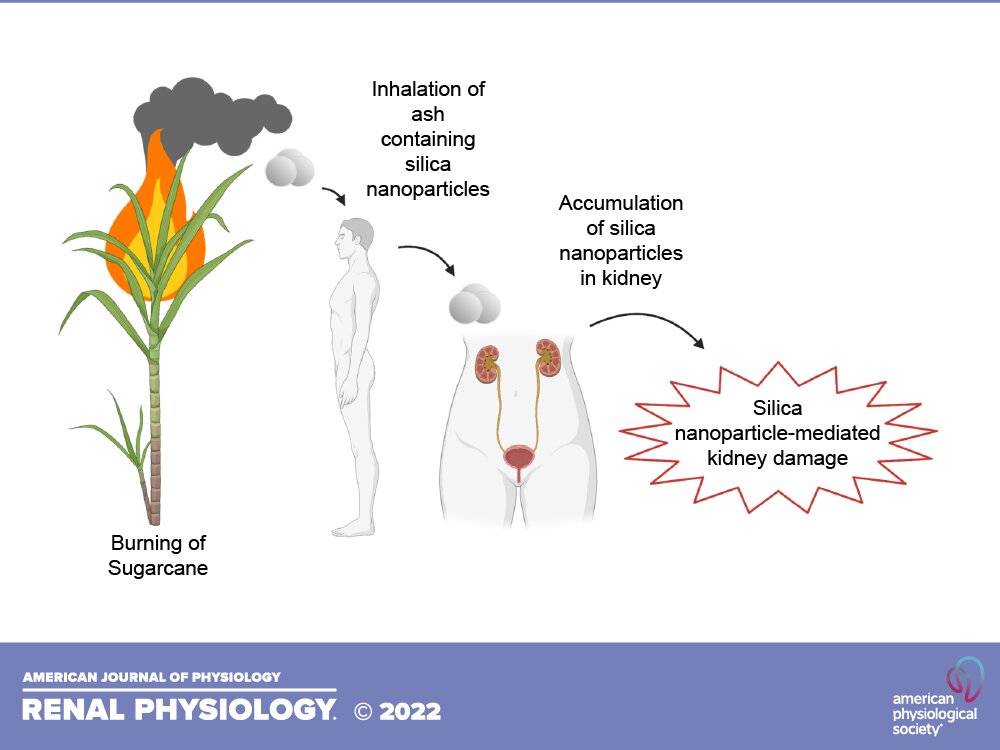 Amorphous silica is a common mineral used in the manufacturing of products ranging from toothpaste to semiconductors. Though it has generally been considered safe, new research in rats demonstrates that inhaling tiny amorphous silica particles, called nanoparticles, can damage the kidneys. The study is published ahead of print in the American Journal of Physiology-Renal Physiology.

Epidemics of chronic kidney disease without a known cause, called “chronic kidney disease of unknown etiology” or CKDu, have developed around the globe. These CKDu epidemics share a number of similarities. They are primarily seen in agricultural labor communities and present with similar symptoms, including:

Sugarcane naturally contains amorphous silica, and burning sugarcane fields releases it into the air. Burning sugarcane fields before harvest is a common practice used to remove extraneous foliage that can slow down collection. Sugarcane workers are among those with the highest rates of CKDu. Researchers decided to test whether it was possible for inhaled silica to affect the kidneys.

The research team analyzed the ash of burned sugarcane fields and exposed rats to silica powder that was the same size as the particles most abundant in the ash. Male rats inhaled pure water (as a control) or water mixed with either 200 or 300 nanometers of particles of silica twice a week for 13 weeks. After 13 weeks, the treatment was discontinued. The research team assessed the rats’ kidney function at 13 and 26 weeks.

In both groups of treated rats, the researchers observed kidney tissue damage and inflammation in areas corresponding to what is seen in CKDu. The treated rats also had elevated levels of creatinine and minimal protein in the urine compared to the control rats. The damage did not subside after exposure ceased, however. It continued to progress, resulting in significant tissue scarring by week 26.

Many other factors could be influencing the development of CKDu, but these findings “support the hypothesis that human exposure to [amorphous silica nanoparticles] found in sugarcane ash could have a participatory role in CKDu,” the researchers wrote.

“Inhaled silica nanoparticles cause chronic kidney disease in rats” is published ahead of print in the American Journal of Physiology-Renal Physiology.