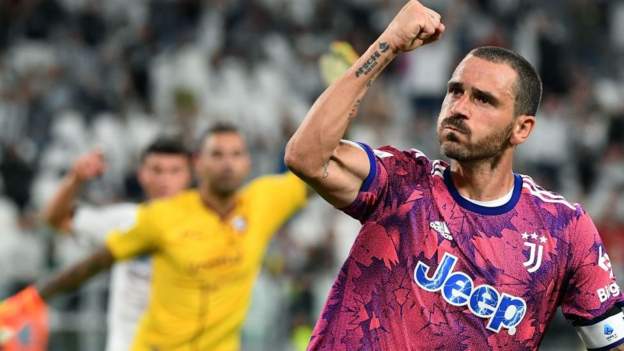 Juventus scored a dramatic equaliser, had another goal ruled out by the video assistant referee and had two players sent off in an incredible finish to their draw with Salernitana.

But Bremer headed one back and Leonardo Bonucci equalised in the 93rd minute after his penalty had been saved.

Arkadiusz Milik thought he had scored a 95th-minute winner but it was offside.

Milik, who had already been booked, took his shirt off in celebration and was sent off.

While Juventus celebrated what they thought was the winning goal, it was announced it would be checked by the VAR official.

Milik was not offside but the third goal was ruled out as Bonucci, who tried to head the ball into the net but failed to make contact, was judged offside.

Salernitana finished just one point above the relegation zone last season and were moments away from their first away top-flight success against Juventus.

Although Juventus salvaged a draw that avoided a first defeat in Serie A this season, the point means they sit a lowly eighth in the table.

Allegri’s side have now not won in three matches and this draw came five days after they began their Champions League group phase with a 2-1 defeat by Paris St-Germain.

The Turin club have finished fourth in the past two Serie A campaigns after being Italian champions nine successive seasons before that.

They next play Benfica in their second Champions League match on Wednesday at the Allianz Stadium.