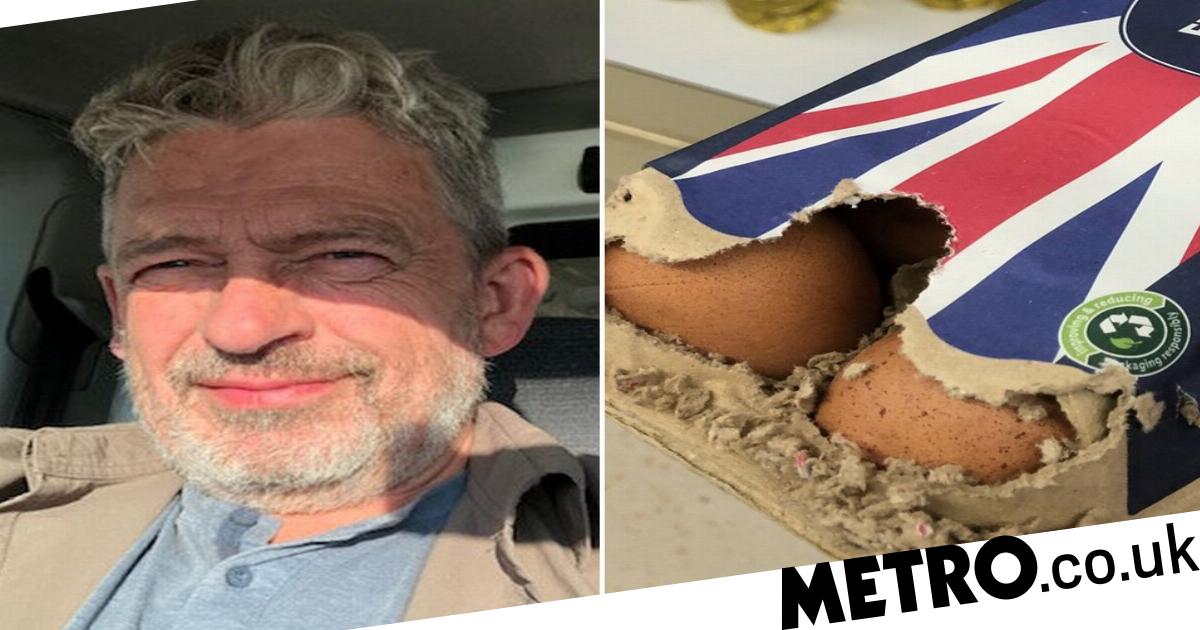 A man has been banned from Lidl after complaining to staff a box of eggs looked as if it had been ‘chewed by a rat’.

Matt Gartside, 59, was shopping at the bargain supermarket in Colne, Lancashire when he came across a carton with what appeared to be bite marks on July 7.

The photographer told the staff about the eggs – only for Lidl to ban him from the store for six months for ‘abusive behaviour towards store colleagues’.

‘This made me angry, It was so simple and they just shot the messenger,’ he said.

‘But I just stuck to my guns, and in the end, I’ve been banned. I don’t know why they have dealt with this in this way. It’s just beyond me.’

Matt took the tattered egg box to a staffer who seemed ‘shocked’ and assured him there were no ‘rats in the supermarket’.

‘They took the box off me and they also didn’t give me an apology or anything,’ he added.

‘I was a bit shocked as they wanted to play it down immediately.’

But the worker cracked under pressure and ‘stormed away’, he said. ‘And it’s the last time I ever saw [the box]’.

A manager then claimed Matt had ‘upset’ staff with his complaint.

Matt said: ‘He went on a bit of a tirade at me, saying I had upset his member of staff. I immediately told him I hadn’t.

‘But he went on a mission of putting me down, saying I had upset this lady.

‘He said: “You called her blind.” But I hadn’t. I just said: “If you had checked, you would have seen them.” I said that I didn’t hurt anybody – it wasn’t her fault.

‘And just before that, I had even caught up with her and said: “At least I deserve an apology.” But instead, she just exited left as fast as she could.’

Matt claimed the manager refused to look at a photo he had taken of the egg box and instead ordered him to leave the Lidl without his groceries.

Months later, he received an email from Lidl’s customer service team banning him from entering a Lidl for half a year.

If he walks into a Lidl during this time, the company would take action against him for ‘trespassing’.

‘It’s the big guy stepping on the little guy in a pretty disgusting way,’ he added.

‘They were making out that I was abusive to their staff. But I wasn’t. I was just persistent.’

A Lidl spokesperson told Metro.co.uk that the company found no evidence of ‘pest activity’ in the store following a full investigation.

They said: ‘The decision to ban the customer was taken as a result of abusive behaviour towards store colleagues.’

‘We would like to further reassure customers that, as part of our standard due diligence, additional checks have been carried out since July and have also come back clear,’ the spokesperson added.

‘Whilst we are always grateful to our customers for raising any concerns with us to address, we have a zero-tolerance policy for abusive behaviour and therefore ask that any interactions with our store colleagues are carried out in a kind and respectful manner.’