Little girl born with no forearm gets doll to match, made by her gran 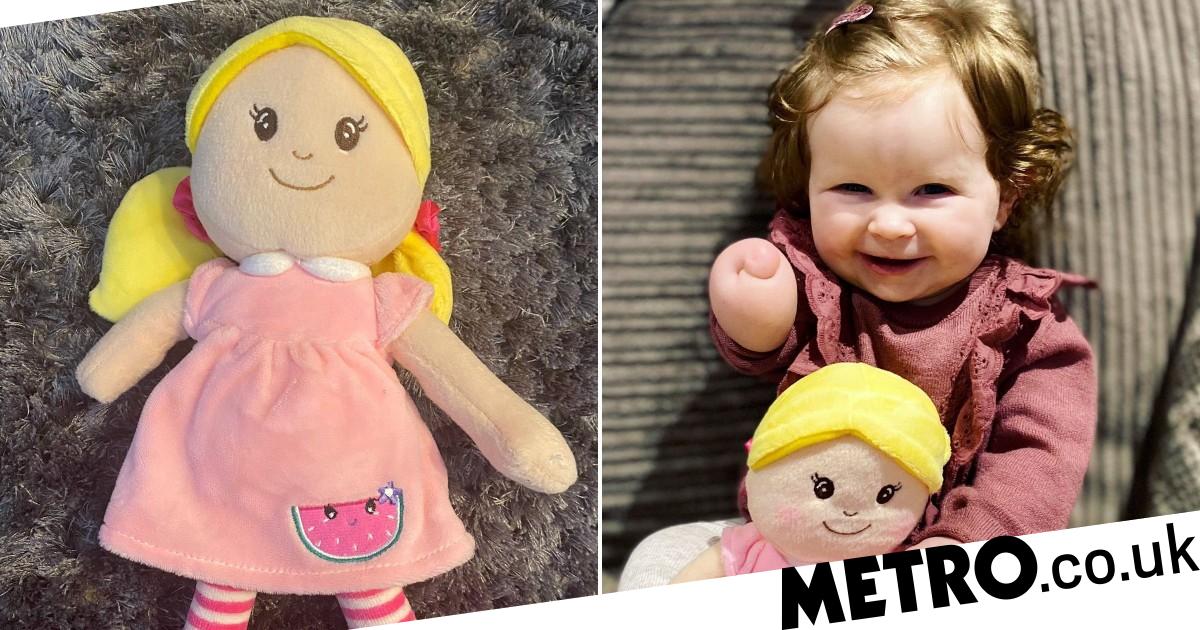 Remi Blackburn, one, loves the doll her grandma made her.

Not just because she appreciates a gift from her nan, but because the toy, named Dolly, is also missing her right forearm.

Remi was born without part of her arm after the limb didn’t grow in the womb.

Her family call it ‘Remi’s bubble’ and prefer to ‘celebrate rather than commiserate’ her differences.

Her grandmother, Toni, 57, from Reading, Berkshire, knitted Remi a doll with an identical shorter arm in November 2021, to give the girl the representation she deserves.

Remi and Dolly are now the best of friends and she ‘takes her everywhere’.

Mum Sarah Blackburn, 29, a medical care assistant, from Reading, Berkshire, said: ‘It’s been great to see Remi have a toy that represents her.

‘It’s bespoke and very special as there’s not a lot on the market here in the UK.

‘Dolly comes with us to the supermarket, park and even her brother, Rory, likes to play with her – of course, that’s when Remi lets him.’

Sarah was told at her 20-week scan that her baby would be born without a right forearm.

‘We felt so worried, we didn’t know what it would mean for her life,’ she remembered.

‘I knew that there was something wrong when the sonographer went quiet.

‘My heart dropped and Jack pressed his hands to his face and turned to the wall.

‘It’s one of those moments that you’ll never forget.

‘When we came out of the scan I burst into tears as we were so overwhelmed with it all.

‘The whole car journey home I couldn’t help but think “was it something I did?”

‘Jack kept reassuring me that it was my mind getting the better of me but I could tell that he was just as shaken up as me.’

Sarah and Jack took to Google for more information, but didn’t find much help.

‘We were met with a lot of articles citing “pregnancy stress” and “extreme parental responsibilities”,’ Sarah said.

‘This send my mind into overdrive as I kept thinking I’d been working too much or lifting Rory too much – but how could I stop doing either of those things?’

Their worries faded away when Remi was born on April 29, 2021 at Royal Berkshire Hospital.

Doctors told the parents that Remi’s limb difference wouldn’t make any difference to her development.

‘It was a relief to feel like she was just a normal baby, which she is,’ said Sarah.

When Remi was eight months old, her grandmother, Toni – Jack’s mum – tailored a shop-bought doll to resemble her grandchild’s limb difference as Sarah was unable to find limb different toys in the UK.

Dolly is a firm favourite with the tot and the couple couldn’t imagine a better way to celebrate their daughter’s differences.

‘We’d been wanting to get her a toy that matched her limb difference for a while but all the dolls were from the US and they were never available,’ Sarah said.

‘That’s when Jack’s mum, Toni, thought of getting a standard doll from Argos and sewing the right arm up.

‘She got given in at Christmas and hasn’t put it down since.

‘Whilst is incredible sweet for Remi to have, I do wish there was more diversity in toys for babies and children.’

Sarah has since set up an Instagram page to raise awareness for limb difference and document Remi’s early years.

‘I’ve received quite a few messages from parents asking about Remi and sharing their own experiences,’ she said.

‘It’s like a little community and a pocket of the internet dedicated to Remi – and Rory of course, he loves to get in the pictures too.

‘She’s incredibly strong-willed and loves to dance, her current favourite is Wheels On The Bus.

‘However, she won’t be the baby for long as we’re expecting another little one in February of next year.

‘I know that our new arrival will be just as amazing as Remi and all three of them, four including Dolly, will have a whale of a time.’


MORE : Disabled people are giving up basic essentials in the face of the cost of living crisis


MORE : Mum paints every single room in her house a shade of pink in ‘dopamine décor’ transformation


MORE : Mum says she never punishes or rewards her kids – instead she uses ‘gentle parenting’