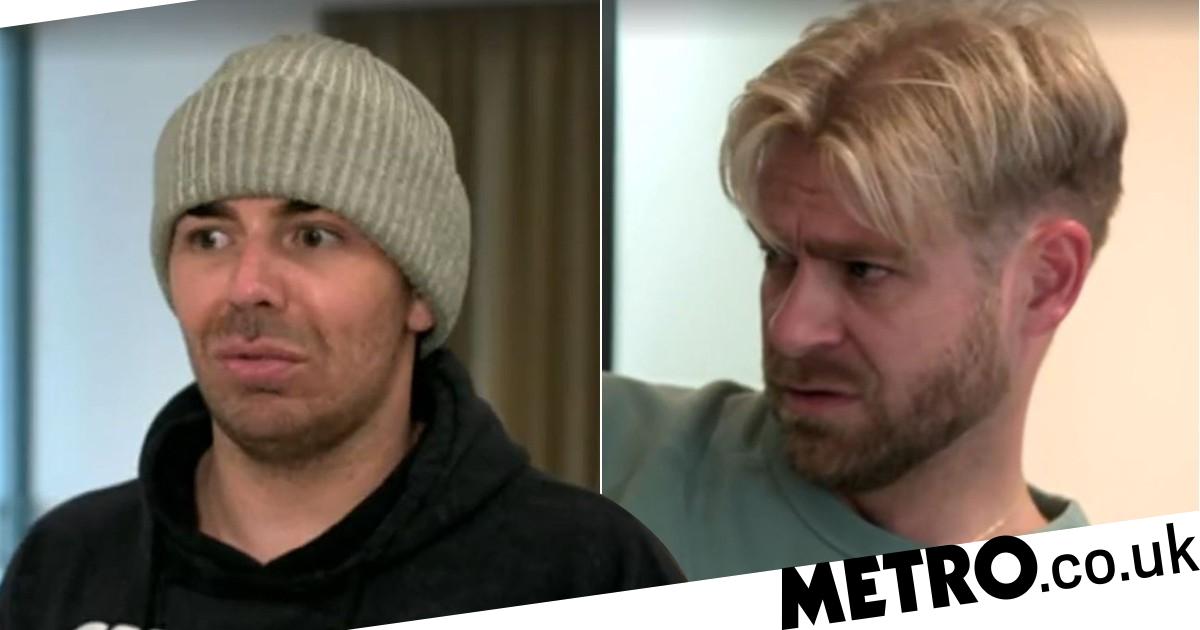 Thomas Hartley and Adrian Anderson have had a pretty rocky ride so far on Married At First Sight UK and things went to a whole other level on Monday night.

The couple came to blows following the commitment ceremony, where they shared some home truths about their feelings towards one another.

With Thomas accusing his husband of not being ’emotional’ enough and Adrian admitting he’s ‘scared’ to open up as he fear’s the reaction, things already weren’t rosy.

Then, when Duka and Whitney had a dispute, Thomas and Adrian clashed once again, leading to Thomas storming out.

The latest episode of the E4 show saw the couples move in together to take their marriages up a notch and really test themselves, but the air was thick with tension the moment Thomas and Adrian entered their shared apartment.

Thomas even refused to look at the framed photo of the newlyweds on their wedding day, before giving his husband the ultimatum: ‘Unless I get an apology, I’m done.’

It was fireworks from that point on, with both guys raising their voice to shout over the other.

‘Let me know what the apology is for,’ Adrian asked, to which Thomas refused.

‘You’re a fully grown man. If you don’t know that shouting in someone’s face requires an apology then I can’t teach you anything,’ he said.

The pair continued to argue back and forth over who has been ‘screaming’ at who, with Adrian confused as to why Thomas felt a need to ‘get involved’ with Duka and Whitney’s drama.

‘You’re like saviour f*****g b***h obviously, aren’t you? Because you clearly had no remorse for Duka at all, when he was sat there like a g******e, whose wife didn’t give a f*** about him’, Thomas shouted, accusing Whitney of ‘bad’ behaviour.

‘Honestly, you are such a gas-lighter, you are so manipulative,’ Adrian retorted, calling his husband a ‘child.’

‘You are f*****g pathetic’, Thomas hit back, before Adrian said: ‘This is it, I feel like I’ve finally been pushed over the edge.’

It’s safe to say the couple needed time to cool down, after Adrian blew his top over how he’s been treated for ‘the past two weeks.’

Fortunately, though, they were able to kiss and make up later on, sitting down for a much calmer conversation where they ironed out their differences.

Both husbands admitted it was a ‘shame’ they had such an explosive row once again after they finally found their ‘footing,’ but Adrian assured that he was open to ‘building up trust.’

‘I think we’ve had a big misunderstanding. I think we need to have open and honest communication, and just try to be as transparent as possible,’ said Thomas, who admitted he too had ‘f****d up.’

They also agreed to ‘lower the decibels’ and to not tell the other ‘don’t shout’ ever again, before hugging and reminding the other: ‘I’ve got your back.’

We cannot keep up with these two!

Married At First Sight continues tomorrow at 9pm on E4.

Katie Price ‘exhausted by relationships’ after rejecting DMs from men