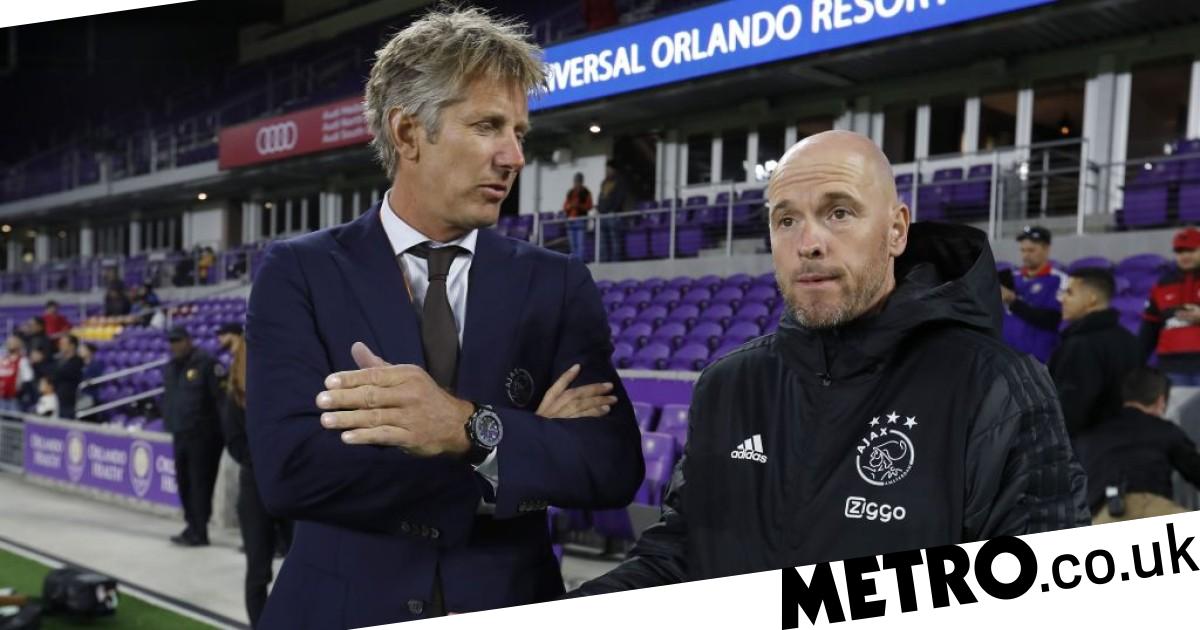 The Eredivisie champions saw their squad ripped apart in the latest transfer window, with the likes of Ryan Gravenberch, Sebastien Haller, Nicolas Tagliafico and Noussair Mazraoui all leaving the club – as well, of course, as their manager.

Ten Hag was keen to be reunited with several of his old players, securing Martinez and Antony for a combined fee of around £135million, while he also tried to sign Jurrien Timber too.

Ajax reinvested plenty of those funds and have started the new season with five straight Eredivisie wins and hammered Rangers in the Champions League in midweek.

But Van der Sar – who extended his contract with the club until 2025 on Friday – is still far from happy with the manner in which his squad was plundered, particularly by someone with such a close affiliation with Ajax.

Asked about Ten Hag taking Martinez and Antony with him to United, Van der Sar told BT Sport: ‘I think that’s somehow the fate that Ajax has.

‘We always develop and scout very good players, sometimes young players, and if they want to take the next step they always go to England, Germany, Spain, that kind of thing.

‘Of course with losing Erik we knew we were losing already a great manager. And, yeah, he’s not really helping us because he took two of our best players also.

‘We got a good transfer fee for them and that’s of course the fate that Ajax has a little bit. But in general it’s always nice to see in the first [Champions League] match how can we cope with that? How are the players that are replacing? Calvin Bassey for example replacing Martinez.’

Ajax had been desperate to hold onto Antony in particular, especially after losing so many players prior to his departure, but the Brazilian refused to train and United eventually got their man – much to Van der Sar’s annoyance.

Speaking about Antony’s move last week, Van der Sar said: ‘It’s not very different than other times when you receive an offer through… I almost wanted to say through fax.. but this is no longer the case. Through e-mail.

‘We said “no” because it was never our intention to sell Antony. Eventually there are offers coming in that make us reach a turning point.

‘At the end of the day football is also a business. I understand the technical area wants to keep everyone together, but we don’t live in this perfect world.’