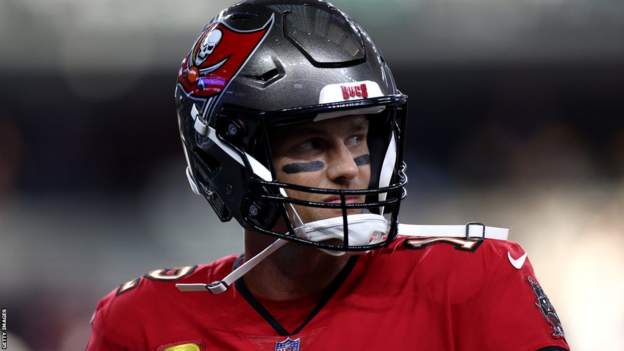 Tom Brady’s Tampa Bay Buccaneers won their first game of the new NFL season with a dominant defensive display against the Dallas Cowboys.

Seven-time Super Bowl winner Brady threw the only touchdown of their 19-3 victory as he became the first 45-year-old starting quarterback in NFL history.

Brady is starting his 23rd season in the NFL after coming out of a short-lived retirement that lasted just 40 days, and he looked sharp enough despite missing 11 days of pre-season because of “personal issues”.

Brady, who led the league in passing yards and touchdowns last season, threw for 212 yards and a touchdown to Mike Evans in a game between last season’s two top scorers that was dominated by defences.

As he begins his attempt for an eighth Super Bowl, Brady did not have to do too much for new Buccaneers head coach Todd Bowles behind what looks a formidable defence and running game, with Leonard Fournette rushing for 127 yards.

Dallas were held to their lowest opening game score for 33 years, and will now be without starting quarterback Dak Prescott as he needs surgery on a fractured thumb picked up late in the game.

Two other Super Bowl contenders had differing fortunes as the Kansas City Chiefs won their first game of the season for the eighth straight year, while the Green Bay Packers suffered a heavy opening defeat for the second season running.

The Chiefs beat the Arizona Cardinals 44-21 as Patrick Mahomes threw five touchdown passes in a game for the sixth time in his career – only three players in history have managed that more.

Back-to-back NFL MVP Rodgers failed to throw a touchdown pass as the Packers lost 23-7 at the Minnesota Vikings, who had receiver Justin Jefferson gain 184 yards and catch two touchdown passes from Kirk Cousins.

The Packers have won three straight divisional titles while winning 13 games in each season, but with Rodgers struggling without star receiver Davante Adams – who has moved to the Las Vegas Raiders – they will face a tougher challenge this year from a Vikings side well equipped to score plenty of points.

Adams had 141 yards and scored his first touchdown for the Raiders, but it was not enough for his new team as they lost 24-19 at the Los Angeles Chargers.

Third-year quarterback Justin Herbert threw three touchdowns for the Chargers, who are expected to challenge with a much-improved defence this year that sacked Raiders quarterback Derek Carr five times and grabbed three interceptions.

The New York Giants started the season with a surprise 21-20 win over last season’s top AFC team the Tennessee Titans, thanks to Titans kicker Randy Bullock missing a late field goal to win the game for the hosts.

The New England Patriots have not really recovered from losing Brady in 2020, and they could be in for another tough season judging by their 20-7 defeat at the Miami Dolphins – their fourth straight loss against their divisional rivals.

Only two head coaches in NFL history have won more games than New England’s Bill Belichick, but he still has a big rebuilding job on his hands as he lost to Miami’s rookie head coach Mike McDaniel.

Cincinnati Bengals quarterback Joe Burrow endured a tough first game since losing the Super Bowl in February as he turned the ball over five times and was sacked seven times during an eventful 23-20 loss to the Pittsburgh Steelers.

Burrow still looked to have won the game for the Bengals when throwing a touchdown pass to Ja’Marr Chase just two seconds from the end, but kicker Evan McPherson missed the extra point to send the game into overtime.

McPherson and Steelers kicker Chris Boswell both missed chances to win it before Boswell finally clinched victory with the last kick of the game from 53 yards. After the Los Angeles Rams also lost on Thursday, defeat for the Bengals saw both Super Bowl teams lose in their season openers for the first time since 1999.

Boswell’s kick avoided two games being tied in the same week for the first time since 1973 as the Indianapolis Colts and Houston Texans could not be separated in their 20-20 draw.

The Colts came from 17 points down in the fourth quarter to force overtime, but their kicker Rodrigo Blankenship missed an opportunity to win the game from 42 yards as it ended level.

One kicker who did hit a game-winner was Cleveland Browns rookie Cade York, who converted a late 58-yarder to beat the Carolina Panthers 26-24. It was the first time the Browns had won a season opener on the road for 28 years.

The Chicago Bears edged the San Francisco 49ers 19-10 at a sodden Soldier Field, while there were also wins for the Baltimore Ravens, the Washington Commanders and the Philadelphia Eagles.