Pakistan v England: Tourists’ toil with the ball as important as batting records 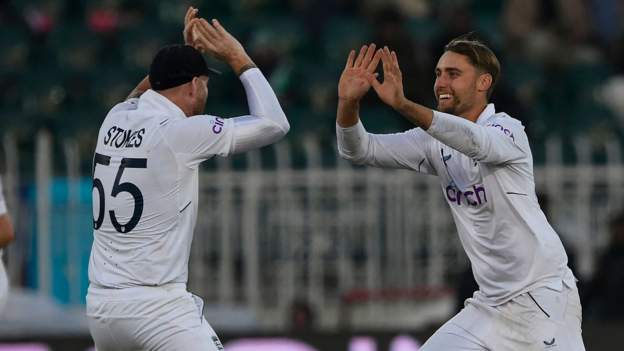 After the sledgehammer comes the scalpel.

England clobbered Pakistan with their run scoring, but it is the surgical way in which they picked their way through the home batting that may ultimately decide the first Test in Rawalpindi.

In Test cricket, runs are for show and wickets are for dough.

It is all very well slapping stacks and stacks of runs, breaking enough records to make Roy Castle proud (ask your parents, kids), but that counts for little if you don’t actually win the match.

On a sapping Saturday in Rawalpindi, with the sun high and the pitch sleeping, England’s tireless effort to take seven Pakistan wickets was just as important as the staggering 506-4 they piled up on day one.

“We’ve got a captain in Ben Stokes and coach in Brendon McCullum that don’t want draws. We’re not playing for draws,” said James Anderson before the Test.

“With the ball we’re trying to take wickets. The captain and coach have made that quite clear. Every time you run in to bowl it’s about taking wickets. It’s not about controlling the run-rate, it’s about how we’re going to get 20 wickets.”

Which is an admirable aim, but much harder to put into practice when you consider England picked a team with just three frontline bowlers in Anderson, Ollie Robinson and Jack Leach, and an all-rounder skipper Stokes who has only sent down seven of 136 overs.

They put their faith in the part-time spin of Joe Root, Liam Livingstone and Will Jacks, men with first-class bowling averages of 49, 36 and 53 respectively – and Livingstone couldn’t bowl because of a knee injury.

It is a plan England have tried before in the sub-continent, with barely any success. Ian Blackwell, Samit Patel and Zafar Ansari to name a few.

In the absence of deep reserves of spin, high pace could have been used to coax a response from the docile surface, but Mark Wood was injured and Jamie Overton overlooked.

On more than one occasion, Robinson had the pace, or lack of it, for reserve wicketkeeper Ollie Pope to stand up to the stumps.

And yet, in a country where England have drawn 18 of their previous 24 Tests, they took the wickets that have set them on course for another landmark win in the Stokes-McCullum era.

In March, an Australia attack of Pat Cummins, Mitchell Starc, Josh Hazlewood, Nathan Lyon and Cameron Green took only four wickets in a Rawalpindi Test – and one of those was a run out.

For England to take seven in a day is testament to their determination, perseverance and creativity.

“All the hard work we put in, we got our just rewards,” said Root. “We had to be quite creative, try to do things differently and think outside the box.”

The bowlers never tired nor erred. Stokes manipulated and manoeuvred his field. Batters were rarely short of company from catchers – five, six or even seven.

Robinson was held back until 90 minutes had passed in the morning session. Anderson was not seen for almost two hours. When the second new ball was available, it was shared by the spin of Leach and Root.

Late in the day, Anderson was rewarded for coming around the wicket by Mohammad Rizwan’s chip to mid-wicket.

At one stage, Root shined the ball on the bald head of Leach in the hope the sweat would produce any sort of movement in the air.

“You’ve got to get some moisture in it somehow, some weight to try to get it to move around on a placid wicket like that,” added Root.

“A nice sweaty, bald head like Jack’s is perfect for it. You can see it sat there on his head. He’s more than just a pretty face Jack, he is very useful in lots of ways.”

England’s ingenuity was summed up by the success of Jacks, the Surrey off-spinner who only found out he was making his Test debut two minutes before he was handed his cap, and started the match with just 21 first-class wickets to his name.

In the three Test wickets he took on Saturday, he got a first in Pakistan even before the great Anderson, removing a man with three hundreds from eight Tests in Abdullah Shafique, then got the big scalp of Babar Azam, the captain who Pakistan fans refer to as ‘the King’ and had made 136 off 168 balls.

“The message to me is to try to take wickets, no matter what the field is, to try to bowl my best ball as much as possible,” said Jacks.

The architect of it all was Stokes, who led with a smile that infected the rest of his team. Never has a day of hard yakka been made to seem so much fun.

Stokes and McCullum have worked hard to ensure playing for England is the most enjoyable experience it can possibly be.

The pre-series training camp in Abu Dhabi included a trip to the Formula 1 Grand Prix and the players are set for a holiday in Queenstown before two Tests in McCullum’s native New Zealand early next year.

“When you’re doing that with guys you know and who you’re friends with, it makes it easier,” added Jacks.

“That’s the environment Stokes and McCullum have been building. It’s a team you want to play for. On days like today, if you’re not tight as a unit, they could be 500-2.”

This new England side might have built its reputation on batting brilliance, but it is the shift in mentality in the field that is just as important.

Always hunting the next scalp through tactical trickery, fluid fields and a love of hard work.

Runs for show, wickets for dough.

England could be about to cash in.