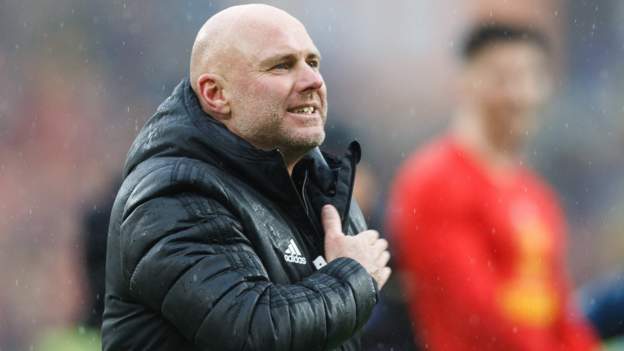 Page’s previous deal was set to expire after the 2022 World Cup.

Page, 48, has been in charge since November 2020, having first taken over temporarily from Ryan Giggs before getting the job permanently.

“There is no bigger honour than coaching your national team and I can’t wait for the challenge the next four years will bring, starting with our first World Cup in 64 years,” he said.

“This is an exciting time for Welsh football and I hope we can make the country proud in November and continue our success by qualifying for more major tournaments in the future.”

Page’s new contract means he will be in charge for Wales’ Euro 2024 qualifying campaign and runs through until the 2026 World Cup.

Under Page, Wales reached the second round of Euro 2020 and qualified for a first World Cup since 1958 when they beat Ukraine in a play-off in June.

Wales face group games against the USA, Iran and England in Qatar later this year.

Page also helped Wales secure promotion to the top tier of the Nations League for the first time immediately after stepping up from his assistant coach role to fill in for Giggs.

Football Association of Wales (FAW) president Steve Williams said: “I am delighted that Rob and the FAW have agreed a four-year contract to take the Cymru men’s national team to the next stage.

“The World Cup is the perfect opportunity to show Wales on the world stage, and I am positive that Rob is the best person for the role, in Qatar and beyond.”

FAW chief executive Noel Mooney added: “The FAW strategic plan, Our Wales, has clear ambitions for our Cymru men’s national team, and I am confident that Rob is the best person to bring us more success over the next four years.

“By putting the correct foundations in place, I am sure that we will see Rob and the team qualify for more major tournaments in the near future and continue to grow the positivity and support around Welsh football at the moment.”

Page is due to his name squad on Wednesday for Nations League games against Belgium and Poland later this month.

Giggs stepped down from his role as Wales boss in June, having originally stepped away in November 2020 after being arrested.

Former Manchester United player Giggs is to face a retrial next July over allegations he assaulted his ex-girlfriend.

Giggs, 48, denied headbutting ex-partner Kate Greville during a row at his home in November 2020. He also denied controlling or coercive behaviour.