Russia hits power stations after being forced into retreat in Ukraine 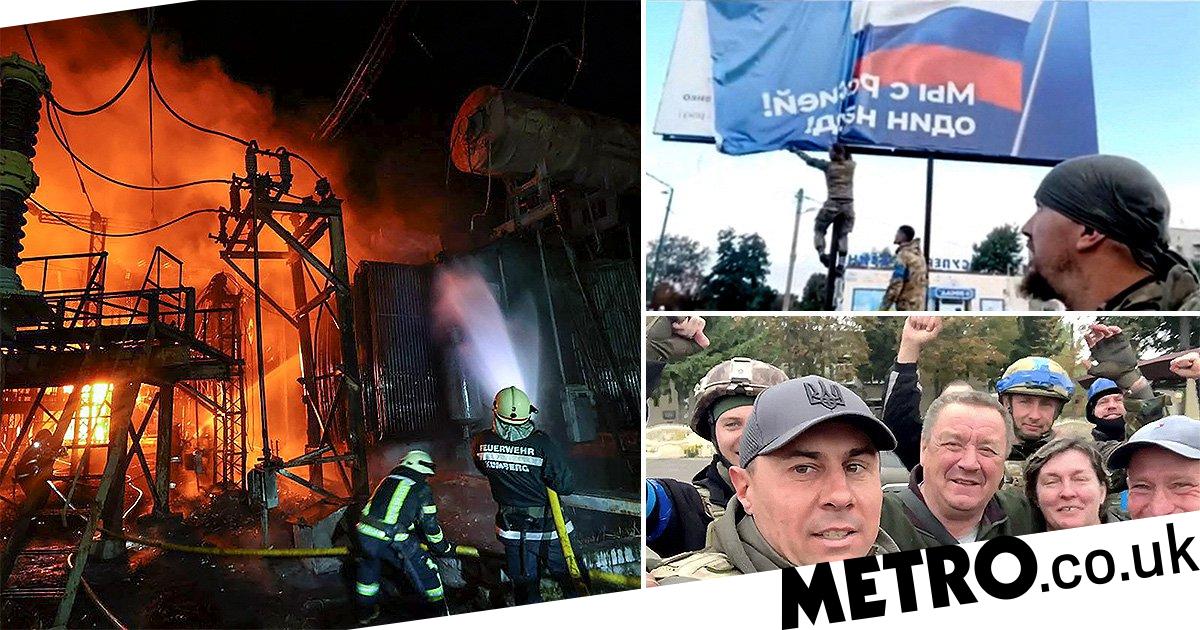 Ukraine made striking gains on the 200th day since Russia invaded today – followed by ‘revenge’ attacks from Putin’s forces on civilian infrastructure.

‘No military facilities, only the goal of leaving people without light and heat,’ he said.

There were widespread outages across Ukraine after Russia attacked power stations, with a bombardment igniting a massive fire at a power station on Kharkiv’s western outskirts that killed at least one person.

It comes after Moscow’s troops were driven out of swaths of territory this weekend, with thousands fleeing key cities.

He said Ukrainian troops are now only 30 miles from the Russian border.

But attacks tonight from Russia sought to damage Ukraine’s capacity to keep going.

The country’s second-largest city of Kharkiv appeared to be without power tonight, with cars driving through darkened streets, and the few pedestrians using flashlights or mobile phones to light their way.

Separately, the Zaporizhzhia Nuclear Power Plant in the Russia-occupied south completely shut down in a bid to prevent a radiation disaster as fighting raged nearby.

In recent days, Kyiv’s action to reclaim control of the Kharkiv region led to Russian troops withdrawing to prevent being surrounded.

They left behind significant numbers of weapons and munitions as the war marked its 200th day on September 11.

One battalion shared a video of Ukrainian forces in front of a municipal building in Hoptivka, a village just over a mile from the border and about 12 miles north of Kharkiv.

In Sunday night’s missile attacks by Russia, the Kharkiv and Donetsk regions seemed to bear the brunt. Dnipropetrovsk, Zaporizhzhia and Sumy had only partially lost power, Mr Zelensky said.

Kharkiv Mayor Igor Terekhov called the power outage ‘revenge by the Russian aggressor for the successes of our army at the front, in particular, in the Kharkiv region’.

But Zelensky remained defiant despite the attacks. Addressing Russia, he added: ‘Do you still think you can intimidate, break us, force us to make concessions? … Cold, hunger, darkness and thirst for us are not as scary and deadly as your “friendship and brotherhood.”

‘But history will put everything in place. And we will be with gas, lights, water and food … and WITHOUT you.’

Later in the evening, some power had been restored in some regions. None of the outages were believed to be related to the shutdown of the reactors at the Zaporizhzhia plant.

While most attention focused on the counter-offensive, Ukraine’s nuclear energy operator said the Zaporizhzhia nuclear power plant, Europe’s largest, was reconnected to Ukraine’s electricity grid, allowing engineers to shut down its last operational reactor to safeguard it amid the fighting.

The plant, one of the 10 biggest atomic power stations in the world, has been occupied by Russian forces since the early days of the war. Ukraine and Russia have traded blame for shelling around it.