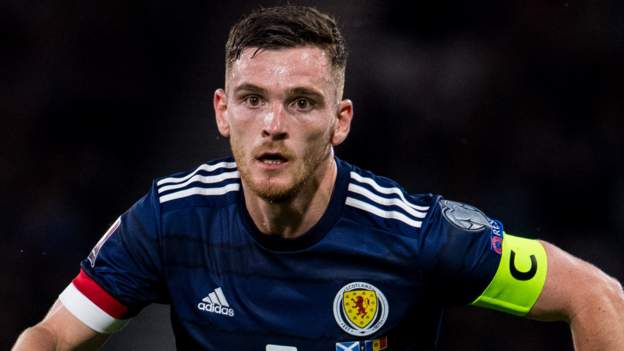 Ryan Fraser returns to the Scotland squad for September’s Nations League matches, but captain Andy Robertson misses out through injury.

Newcastle winger Fraser made himself unavailable last November, a decision for which he later apologised.

Fraser, 28, pulled out citing an injury, but was pictured training for his club the following day.

Scotland play home and away against Ukraine (21st and 27th) and at home to the Republic of Ireland (24th).

Steve Clarke’s side currently sit second in Group B1, one point behind Ukraine and two points in front of the Irish.

Lewis Ferguson is absent after playing just six minutes so far for Bologna in Serie A, while Billy Gilmour, Jack Hendry and Anthony Ralston do make it despite a lack of game time this season.

Midfielders Ryan Jack and Kenny McLean are back from long-term injuries, but Sunderland striker Ross Stewart is out with a thigh problem.

Rangers goalkeeper Jon McLaughlin, who won the last of his two caps in 2019, returns now that he is no longer understudy to Allan McGregor at Ibrox.