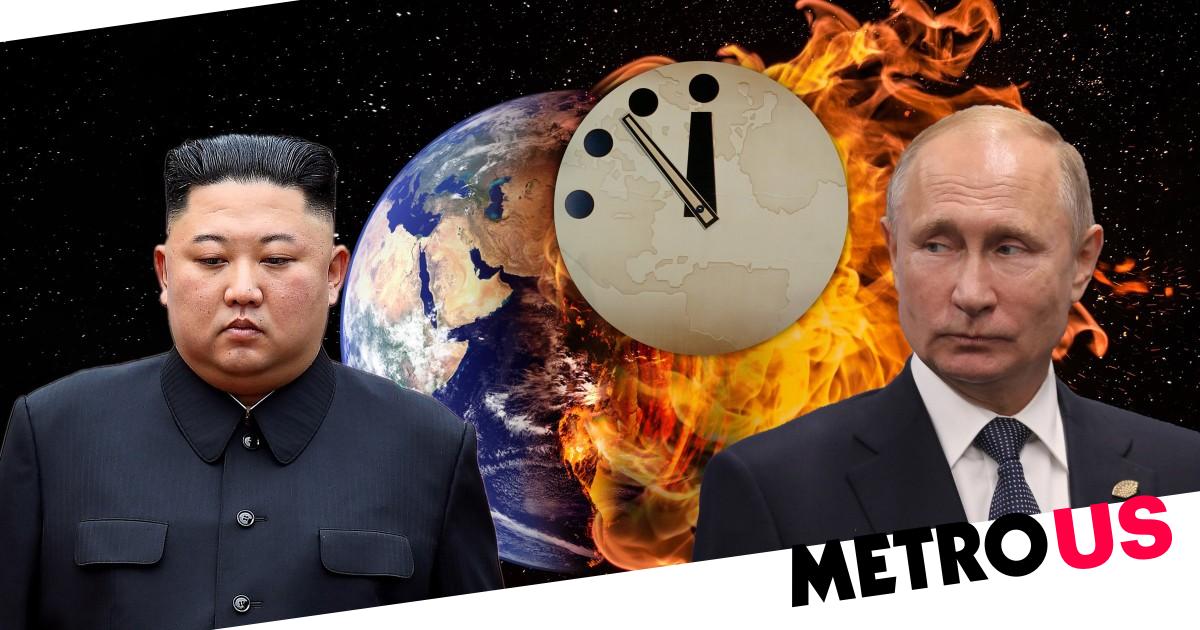 How close are we to the end of the world?

It may seem a fairly dramatic question for a Tuesday morning, but scientists have spent recent weeks toiling over the answer.

They are preparing today to set the time on the Doomsday Clock, which currently sits at 100 seconds to midnight.

It was created in 1947 by the Bulletin of Atomic Scientists, a science publication based in the US.

The clock was designed to represent how high the threat is of a global catastrophe, and act as a reminder of the perils we must address if we are to survive on the planet.

The closer to midnight the clock moves… the closer to annihilation humanity is according to scientists.

‘Every year, the Bulletin’s Science and Security Board looks at the world’s vulnerability to catastrophe from manmade threats,’ Rachel Bronson, president and CEO of the Bulletin of the Atomic Scientists, told ABC News.

‘This year, the war in Ukraine and the ripple effects it has caused around the world and on many issues is a major factor in that consideration.’

Since 1973, a board of scientists has met twice a year to examine the latest developments in challenges facing the world, with extra input from outside leaders in their fields, including 13 Nobel Laureates.

As of 2007, it also takes climate change into consideration and has become a way to assess the general health of the planet on an annual basis.

Dr Matt Hurley, senior lecturer in International Relations at Sheffield Hallam University, told Metro.co.uk: ‘Significant international conflicts that have erupted since the last time the Doomsday Clock was updated, including the war in Ukraine, will likely push the world a few seconds closer to midnight.

‘We live in a world of complex and interconnected crises that seem increasingly intractable, from war to climate change, from pandemics to nuclear proliferation.

‘Movements of the clock can – and should – help focus the mind. Yet this can feel like an abstract way of capturing the very real dangers facing the world.

‘The crises that inform the movements of the clock are being experienced now, in real time, in the everyday lives of human beings around the world, often in incredibly violent ways.’

Experts and scientists fear the planet has been moving ever close to disaster 1991, when the clock was shifted to 17 minutes to midnight at the end of the Cold War.

In the years since, we’ve lived through major points in history such as the coronavirus pandemic, the Russian invasion of Ukraine, the Capitol Riots and an international cost of living crisis.

Heatwaves in summer and extra cold snaps in winter are also a timely reminder of the growing threat of climate change.

Professor Brad Evans, director of the centre for violence at Bath University, has urged caution in taking the clock’s symbolism at face value.

He told Metro.co.uk: ‘The doomsday clock is a frighteningly symbolic image for a world that’s continued to live within the show of annihilation.

‘Whilst this image has come to shape our politics, we do after-all live in catastrophic times where the future looks like an endemic terrain of crisis, there are a number of problems with this particularly symbolic attempt to calculate the time that remains.

‘Who determines the time? And by what criteria?’

Professor Evans also argued that the clock’s movement may be more influenced by it’s makers than we realised.

He added: ‘The clock, like all risk assessment, is also deeply politicised.

How has the clock changed since 1947?

‘The clock, for example, barely moved during the Cuba missile crisis when the world was perilously close, arguably the closest it has ever been, to extinction.’

When the Bulletin panel met in 2020, the hand was moved from two minutes to midnight forward to 100 seconds to midnight, the closest to Armageddon it has ever been.

Last year, the scientists behind the clock warned of the start of a ‘dangerous new nuclear arms race’ if global tensions between the likes of the US and Russia and China were not resolved.

Many of the problems poised last year still exist, and have amplified in some cases.

At 3pm British time, it will be announced if the hand on the Doomsday Clock is moving and – if so – how far it will go.

Various speakers will join scientists as they announce the latest time on the Doomsday Clock.

Mary Robinson, the first women president of Ireland and Elbegdorj Tsakhia, former president and prime minister of Mongolia, are among them.