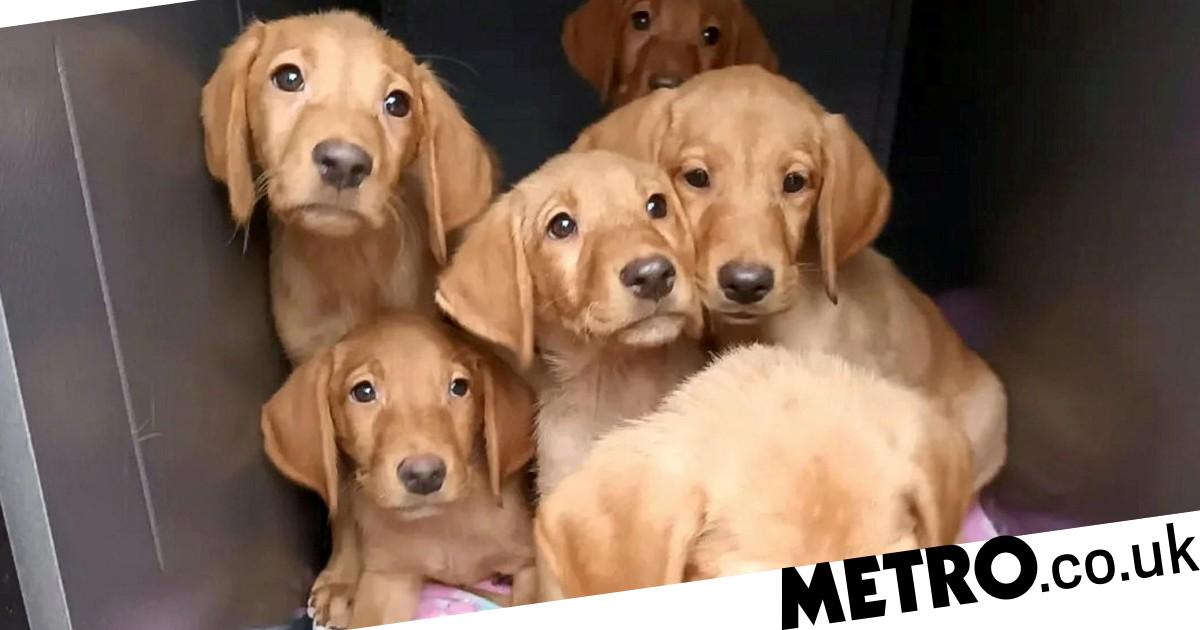 Seven starving, mite-riddled Labrador puppies were abandoned ‘like rubbish’ on the side of a road.

The underweight and mange-ridden ‘fox red’ pups were too nervous to leave the crate they were dumped in on the A249 in Swale, Kent.

Their overgrown claws and nervousness suggests they may have spent their whole lives locked in the box and fed only on woodchips.

It is the latest shocking case in Britain’s pet-dumping crisis that continues to overwhelm animal charities.

Swale Borough Council’s stray dog service said the puppies, aged between 10 and 12 weeks, would be taken to a vet.

‘They also have woodchips in their faeces which could suggest poor environment, poor diet or both.

‘Puppies should be tiny whirlwinds full of confidence and energy, but these guys are so nervous.

‘Even with the crate door open, all of them were too frightened to move.

‘Their little claws are so sharp and long, we wonder if they’ve ever left the crate at all. This is animal cruelty and outright neglect.

‘These pups didn’t ask to be born and they certainly didn’t deserve to be dumped like rubbish.

‘Sadly, with the current pet crisis, we feel this is just the tip of the iceberg.’

It comes as calls for pet food banks have surged as desperate owners battle to hold onto their animals amid the cost of living crunch.

Iain Heaton of Blue Cross added it was expanding its pet food banks as they are a ‘vital’ way to keep owners and their pets together.

But there are demands for official government backing to keep pets’ water and food bowls filled.

Steve Craddock, manager of the Battersea Dogs & Cats Home centre in south London, warned in August about the cost of living crisis: ‘We are concerned that’s going to be an increasing reason for people bringing their dogs in to Battersea.’

Recent abandonment cases have included a terrier hurled from a truck moving at 50mph and a box of 20 puppies abandoned at a layby in Essex.

The RSPCA says it has recorded a 25% spike in abandoned pets this year.

Its call centre workers also say they are overwhelmed by reports from people struggling to feed and care for their animals.

RSPCA figures show 3.2 million pets were bought during lockdowns, and estimates one in five pet owners are now worried about how they will feed their companions.