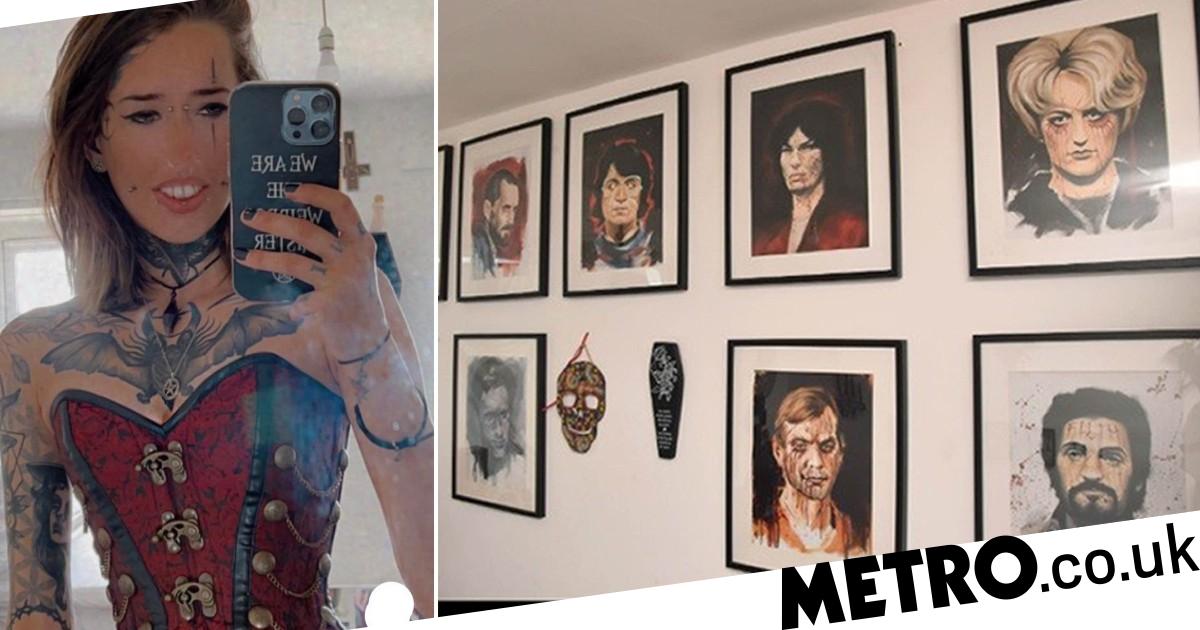 Jurors in the trial of a true crime fan accused of murdering her boyfriend in his sleep have been shown pictures of her bedroom wall adorned with framed portraits of serial killers.

Shaye Groves, 27, is said to have slit 25-year-old Frankie Fitzgerald’s throat and stabbed him repeatedly with a dagger she kept in the bedside drawer at her home in Hampshire last July 17.

Steven Perian KC, prosecuting, told the jury when he opened the case she killed him in ‘a crime of passion driven by her jealousy’.

Afterwards, she is said to have sought to manipulate the situation and portray herself as the victim of Mr Fitzgerald’s sexual violence.

She video-called a friend, Vicky Baitup, to confess to the killing and showed Mr Fitzgerald covered by a duvet and with a deep cut to his neck, the court was told.

Groves is said to have told her she went through Mr Fitzgerald’s phone as he slept and ‘snapped’ when she saw he had been messaging a 13-year-old girl on Facebook.

The court has head Groves had pictures of serial killers on her walls, collected books on infamous criminals and was an avid viewer of true crime documentaries.

Mr Perian went on: ‘The Crown say that the defendant – by reading about and watching murder documentaries – she was familiar with crime scenes, how to create a false narrative and how to set up a false alibi.

‘The Crown say that when you hear the evidence during the trial, it is open to you to conclude that she deliberately set up a false narrative of being abused by Frankie Fitzgerald, a false alibi she sent to Vicky Baitup and was cleaning the crime scene having watched these documentaries.’

Post-mortem tests showed Mr Fitzgerald ‘suffered catastrophic blood loss’ from a knife wound to his neck and also had 17 stab wounds to his chest, which were inflicted as he was dying.

Groves, who also goes by the surname Corrigan, of Botley Drive, Havant, denies murder, claiming she acted in self-defence.