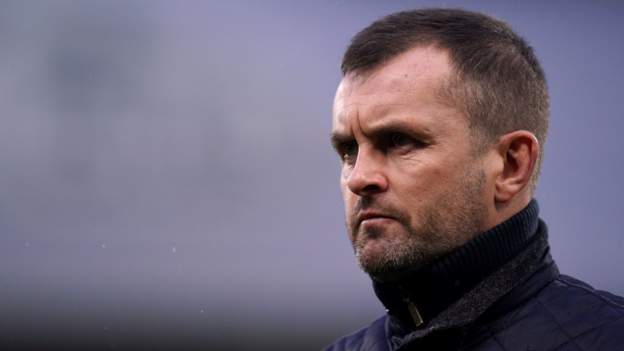 In January 2022, Southampton were taken over by Sport Republic, with chief executive Martin Semmens describing it as “a pivotal moment” for the club.

A year on, Saints are bottom of the Premier League and co-owner Rasmus Ankersen summed up their first 12 months in charge as a “really rough ride”.

So what’s going on? Has the rot set in or is it just teething problems for ambitious new owners?

A Carabao Cup semi-final first leg against Newcastle on Tuesday suggests some progress, so BBC Sport went in search of answers.

A miserable year on the pitch

Out of the 17 teams that started and ended 2022 in the Premier League, Southampton picked up the fewest points (31), lost the most games (21) and had the worst goal difference (-32). 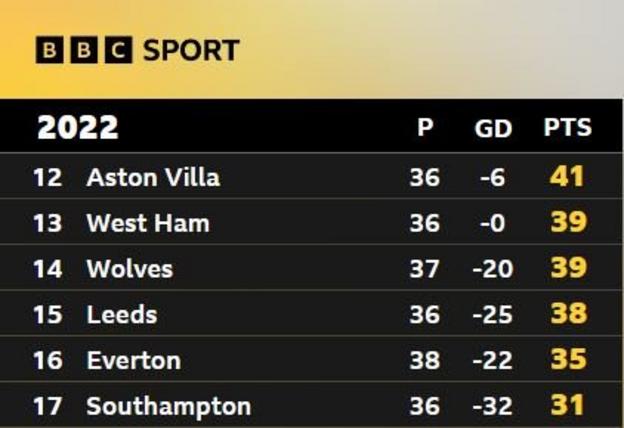 It did not have to be that way.

Excellent form through January and February 2022 brought memorable results against Spurs and Manchester City as well as progress to the FA Cup quarter-finals.

Then their season imploded.

“They went to Aston Villa, got caned and never recovered,” said BBC Radio Solent’s Adam Blackmore of a 4-0 hammering at Villa Park in March. “They fell off a cliff.”

From ninth with 35 points after 26 games, they picked up only five more points and finished 15th.

This season, an encouraging victory over Chelsea in August was followed by just one win in 13, Ralph Hasenhuttl being sacked and the mood on the south coast mutinous.

Money to spend – but how successfully?

Investment was much needed at Southampton after years of haemorrhaging talent, with key players including Virgil van Dijk and Danny Ings leaving for pastures new since 2018.

In the summer, more than £70m was splashed on exciting young players including Manchester City youngsters Romeo Lavia and Gavin Bazunu.

However, the departures of experienced pros Nathan Redmond, Fraser Forster, Shane Long and Oriel Romeu left a leadership gap, with former Saints midfielder Jo Tessem arguing there has been too much change, too soon.

“There is a long-term plan and they will get better,” he said. “They are talented – Lavia is one of the top three best young players in the Premier League in my view.

“But, because they have sold so many good players, there is too much responsibility on the younger players.”

Ankersen disputes this, citing signings of internationals Joe Aribo and Duje Caleta-Car as evidence of a more pragmatic approach.

“We said goodbye to only one starting XI player in Romeu,” he said. “And our strategy is aligned with what Southampton has been for many years, turning potential into excellence.

“We’ve got some really exciting talents that can be among the world’s best, but it’s always a balance.”

Semmens agrees, saying: “There is a clear plan and we are going in the right direction.”

“When you are losing and your team have not experienced the tougher side of football, it can be difficult,” he said. “We cannot compete financially, so we have to take a different approach.”

Indeed, on Monday, Southampton recalled 26-year-old Jan Bednarek from his season-long loan at Aston Villa, with boss Nathan Jones citing the need to add more “experience” to his defence.

For Blackmore however, it’s a straightforward problem. Southampton have needed a goalscorer for a long time – and failure in the summer to address the issue made this season’s problems inevitable, even if a recent tactical tweak has brought more goals for James Ward-Prowse.

“Ralph was promised a striker and he never got one,” he said. “If they’d made the signing, they would not be in this position and he might still have his job.”

The new man at the helm

Luton Town boss Jones replaced Hasenhuttl on the eve of the World Cup and had five weeks with his new players. That, according to Blackmore, did not help.

“He’d promised his team would have a clear identity and he had all that time to be prepared for the Christmas fixtures but it seemed to have no impact,” he said.

“Perhaps the players got bored with training with no games. He didn’t get a honeymoon period.”

Tessem agrees, saying in the Boxing Day defeat to Brighton, Saints looked like they were playing someone “from a different division”.

Form reached its nadir against Nottingham Forest at St Mary’s earlier this month as Southampton had no shots on target and lost at home to the division’s worst team on the road.

With the press, Jones has cut a frustrated figure at times. Three impressive wins in all competitions across seven days against Crystal Palace, Manchester City and Everton helped instil confidence, but a narrow loss at home to Aston Villa on Saturday prevented Saints overcoming what he described as “the first psychological barrier” of escaping the bottom three.

“I hope somebody is advising him to be less defensive in interviews,” said Blackmore. “He does not have to justify his existence. He needs to get people on his side.”

Crucially, his bosses are on board. It’s not in Southampton’s DNA to make knee-jerk managerial decisions.

Ankersen admitted Jones was “never going to be an appointment for great PR” but his record as manager of the year in the Championship last season – “Europe’s sixth-biggest league”, the co-owner insists – suggested he could be successful at a higher level.

“He ticked boxes for us,” said Ankersen. “We needed a manager who believed in what we believed in. We knew the issues – squad togetherness, set plays, keeping clean sheets and being harder to beat.

“He has a track record of fixing these.”

Tizard agrees with the message from Sport Republic: “Most things they said made sense,” he said. “You have seen a team in recent games that are playing for their manager.”

The owners’ project could get lift-off if they can sneak past Newcastle and reach a first domestic cup final since 2017.

Sean Dyche: What new Everton manager will bring – by those who have played for him