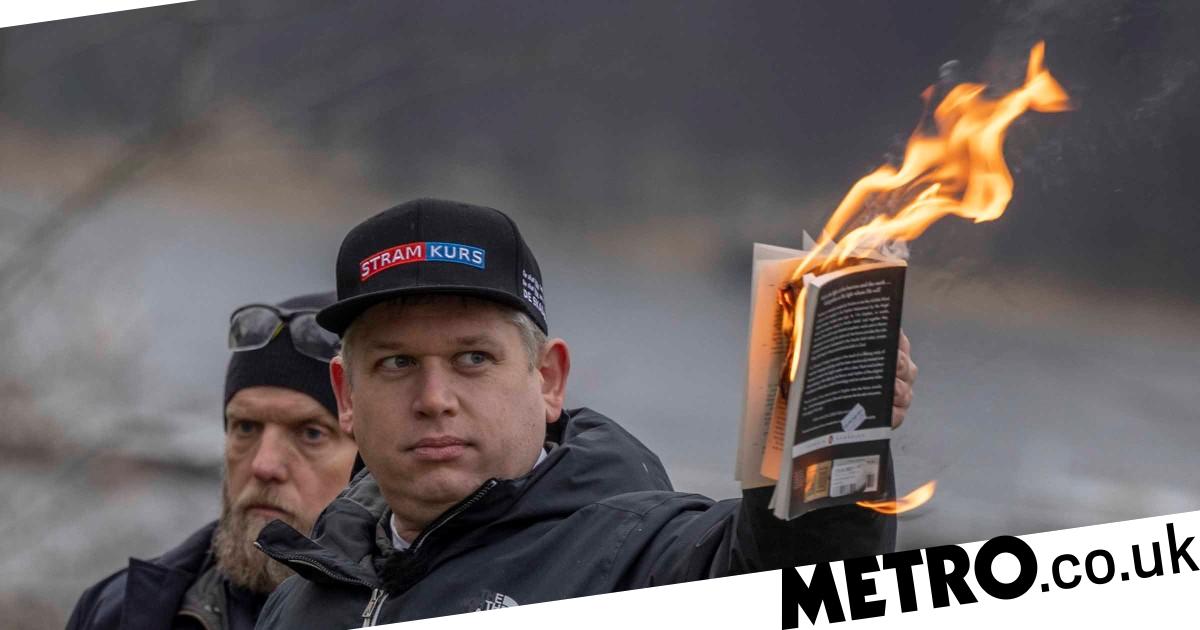 Protests in Turkey have continued for a second day after a far-right politician burned a copy of the Quran outside the country’s embassy in Sweden.

Anger was sparked when anti-Islam politician and convicted racist Rasmus Paludan was granted permission to burn the holy book in Stockholm yesterday.

Around 250 people who gathered outside the Swedish Consulate in Istanbul held green flags featuring the Islamic proclamation of faith and a banner that said ‘We condemn Sweden’s state-supported Islamophobia’.

A photo of Mr Paludan was also set on fire in front of the consulate, where a sign in the window read: ‘We do not share that book-burning idiot’s view’.

Turkey has held off ratifying the memberships of both Sweden and Finland until they meet a number of conditions, including the extradition of alleged Kurdish fighters and an exiled journalist.

Earlier this month, Swedish prime minister Ulf Kristersson told a security conference: ‘Turkey both confirms that we have done what we said we would do, but they also say that they want things that we cannot or do not want to give them.’

Adding to the tensions, a pro-Kurdish group hanged an effigy of Mr Erdogan from a lamppost outside Stockholm City Hall on January 11.

Mr Kristersson said the group was aiming to sabotage the Nato application, telling TV4 the ‘kind of mock execution’ was ‘extremely serious’.

He also condemned Mr Paludan’s protest in a tweet from the official Swedish PM account, writing: ‘Freedom of expression is a fundamental part of democracy. But what is legal is not necessarily appropriate.

‘Burning books that are holy to many is a deeply disrespectful act.

‘I want to express my sympathy for all Muslims who are offended by what has happened in Stockholm today.’

Mustafa Demircan, who was protesting in Istanbul today, said the act of burning the Quran should not be protected by the right of free expression.

Victoria Beckham under fire for ‘false no makeup claims’