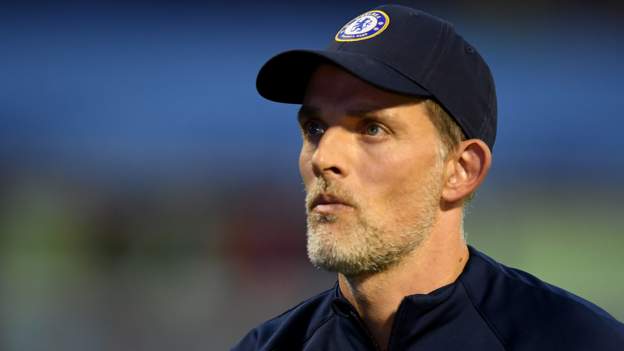 Chelsea have sacked manager Thomas Tuchel on the new owners’ 100th day in charge after their third defeat of the season.

Owner Todd Boehly has placed Tuchel’s coaching staff in temporary charge until a replacement is found.

A club statement said the owners believed it was “the right time” to bring in a new head coach.

BBC Sport understands the decision would have been taken regardless of the 1-0 defeat in Chelsea’s Champions League opener at Dinamo Zagreb on Tuesday night.

It is also understood that Chelsea will make a swift appointment and among the bookmakers’ favourites to take over are Brighton manager Graham Potter, former Spurs and PSG boss Mauricio Pochettino, former Real Madrid manager Zinedine Zidane and current Leicester boss Brendan Rodgers.

Chelsea are sixth in the Premier League after three wins, one draw and two defeats.

Their new ownership oversaw a £255.3m spending spree in the summer window, thought to be a British record, bringing in eight new players.

But despite the outlay, the club’s form had been patchy and Tuchel was critical of his players on occasion, as well as being fined twice for his behaviour already this season.

It is believed that Tuchel – who led Chelsea to the Champions League title in his first season – had lost the confidence of the squad and the board in recent times, and had become less communicative with both groups.

“As the new ownership group reaches 100 days since taking over the club, and as it continues its hard work to take the club forward, the new owners believe it is the right time to make this transition,” a club statement said.

“On behalf of everyone at Chelsea FC, the club would like to place on record its gratitude to Thomas and his staff for all their efforts during their time with the club. Thomas will rightly have a place in Chelsea’s history after winning the Champions League, the Super Cup and Club World Cup in his time here.”

BBC Sport also understands that Chelsea will now look for a long-term manager who shares their vision for a collaborative culture and focus on development of all players in the squad.

New signings – including the deadline day deal for Pierre-Emerick Aubameyang from Barcelona – were down to collaboration of the board and Tuchel, and it is said he became less involved as time went on.

He went on to add the Uefa Super Cup and Fifa Club World Cup later that year.

Sacking Tuchel might come as a surprise to many, but his touchline behaviour has been indicative of a wider malaise at the club under his tutelage.

He was tetchy on the pre-season tour in Los Angeles and critical of his players after their United States friendlies. That was repeated after the Dinamo Zagreb defeat where he complained about a lack of intensity from them.

In the last 16 Premier League games, from April to the start of this season, Tuchel’s win percentage had dropped to 44%.

During that same period, Chelsea are eighth in the Premier League form table – behind Brighton, Brentford and Newcastle.

Now we are told that he had lost the confidence of his players – which could explain a perceived lack of hunger – and critically, the board. Even though Chelsea have been renowned for their ‘hire and fire’ approach under former owner Roman Abramovich, the new American ownership, led by Boehly, has been equally decisive.

Questions will remain about whether it was a wise move to sack Tuchel after allowing him to take a key part in transfer policy, but sources have said that targets have been a result of a collaborative approach, which Tuchel slowly withdrew from.

Buying into that will be key for Tuchel’s replacement. Brighton manager Graham Potter has received plaudits for how he works with sporting directors and how he develops players, but there will be many coaches who will want to take over at Stamford Bridge, with the new ownership once again showing they will be aggressive in their pursuit of success.

Chelsea had fallen from being top of the Premier League at the start of December 2020 to eighth before Lampard’s departure in January 2021 – out of the title race and in danger of missing out on a Champions League spot.

Tuchel drew his first match in charge, at home to Wolves, but won his next four, eventually going unbeaten in his first 13 league games – a record for a new Chelsea manager.

He secured a fourth-place finish that term, pipping Leicester to the final Champions League place on the final day despite defeat by Aston Villa.

Chelsea went on to beat Manchester City in the 2021 Champions League final in Porto as Tuchel repeated the feat of Roberto di Matteo, who led Chelsea to the 2012 Champions League title after taking charge midway through the season.

Tuchel led Chelsea through one of the most tumultuous periods in the club’s history as the spotlight turned on the club’s ownership by Russian billionaire Roman Abramovich following the invasion of Ukraine.

The club was placed under government sanctions from March as a new owner was sought for the club before the £4.25bn buy-out was completed at the end of May.

Despite the ongoing ownership issues, Tuchel managed to guide Chelsea to a third-placed finish in the Premier League last season, as well as the FA Cup and League Cup finals, losing both to Liverpool on penalties.

The German boss worked with Boehly to revamp the squad with a record-breaking transfer window this summer.

While a handful of first-team regulars such as Antonio Rudiger and Timo Werner left the club, and £97.5m striker Romelu Lukaku was loaned out to Inter Milan, a raft of big-money signings arrived at Stamford Bridge.

Kalidou Koulibaly and Wesley Fofana were brought into defence, while Raheem Sterling bolstered the attack, along with the deadline-day signing of Aubameyang from Barcelona.

Aubameyang made his debut in the defeat by Zagreb, but was short of match fitness and lasted just over 50 minutes.

The potential problems behind the scenes at Chelsea surfaced in Tuchel’s comments following the shock Champions League group-stage loss, as he admitted the side was “not where we want to be”.

“We are clearly not there, where we need to be and where we can be,” he said. “So it’s on me, it’s on us, we need to find solutions.

“At the moment, everything is missing, [there is] too much to analyse. I’m a part of it.

“It’s a lack of hunger, intensity, a lack of determination to win duels, to actually do things on the highest level.”

Former England and Manchester United defender Rio Ferdinand has said the decision to sack Tuchel was a “massive statement” from Boehly that “doesn’t make sense”.

“Chelsea have set their stall out now. It’s a giant statement from Todd Boehly and his new regime. It leads you to the point, where will they go? Do they have someone lined up?” Ferdinand said.

“Anybody who comes in now. You’d think it’s a downgrade on Tuchel and his resume. He is a proper manager. All the players I speak to talk positively about him. He is honest and direct. He has clarity on how he wants to play. I can’t understand it.”

Former Chelsea winger Pat Nevin said “it is a surprise but not a complete shock” to see Tuchel leave the club.

“We liked Tuchel, as a person and as a manager,” Nevin told BBC Radio 5 Live. “They have been poor away from home so far this season.

“Whether or not that’s because Tuchel hasn’t been able to get the best out of them or if Boehly and the new owners wanted to get their own man in anyway, I’m not sure.

Nevin thinks Boehly should look closer to home for his next appointment: “I’ve often thought in times gone past there must be a possibility that Emma Hayes will get a big job. I think some people will talk about it and hope one day she does get that job. She is so good.”