U.S. attorney ousted by Barr and Trump recounts effort to hold line against political pressure for 2½ years till ‘the rope snapped’ 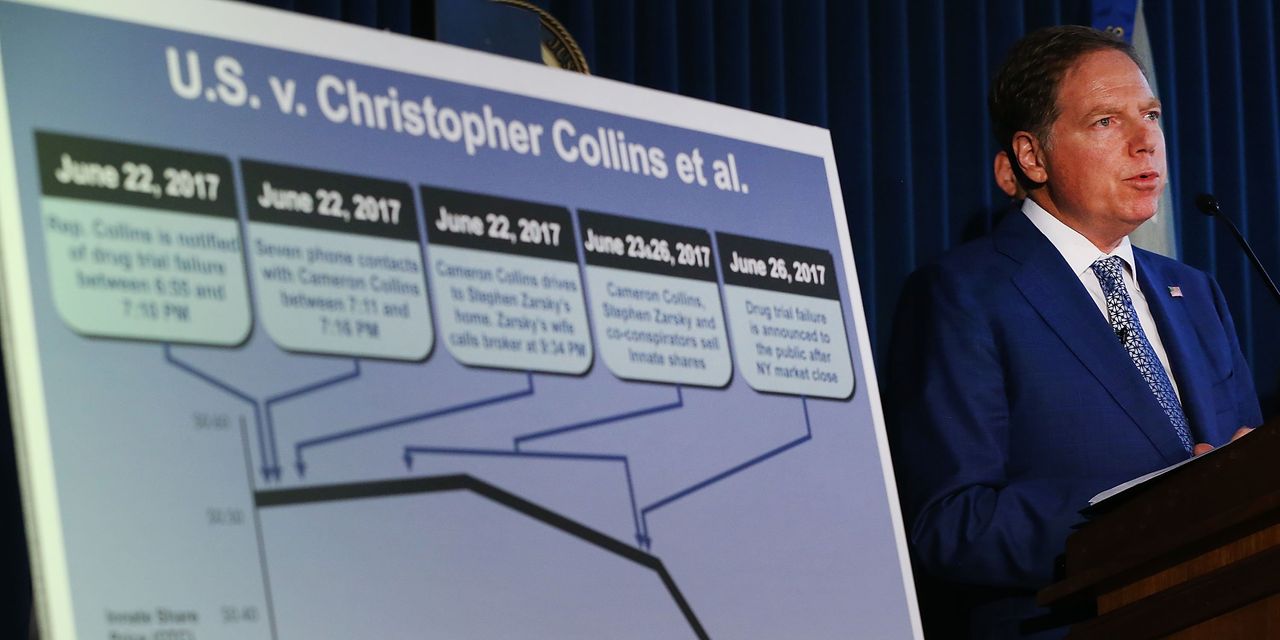 NEW YORK (AP) — In a new book, the top federal prosecutor in Manhattan for half of Donald Trump’s presidency says he was repeatedly pressured by Justice Department officials to use his office to aid them politically, including by investigating former Secretary of State John Kerry.

Former U.S. Attorney Geoffrey S. Berman wrote in his upcoming book, “Holding the Line,” due to be published Tuesday, that he mostly resisted the pressure from Washington, according to the the New York Times, which obtained an advance copy.

“ ‘Throughout my tenure as U.S. attorney, Trump’s Justice Department kept demanding that I use my office to aid them politically, and I kept declining — in ways just tactful enough to keep me from being fired.’ ”


— ‘Holding the Line,’ by Geoffrey Berman

“Throughout my tenure as U.S. attorney, Trump’s Justice Department kept demanding that I use my office to aid them politically, and I kept declining — in ways just tactful enough to keep me from being fired,” the book said.

Berman, a Republican and Trump-administration appointee, said he walked that “tightrope” for 2½ years before “the rope snapped,” the newspaper reported.

Trump fired Berman as U.S. attorney in June 2020 after Berman refused a request that he resign and, over a multiday period of escalating drama, publicly refuted then–Attorney General William Barr’s statement asserting that Berman was stepping down.

From the archives (July 2020): Berman says Barr ‘repeatedly urged’ him to resign as top SDNY prosecutor

In the book, Berman revealed that Justice Department officials ordered an investigation of Kerry in 2018 after Trump withdrew the U.S. from a nuclear accord with Iran, a deal that Kerry had helped negotiate as President Barack Obama’s secretary of state.

Trump was among several Republicans who publicly demanded an investigation, claiming that Kerry, as a private citizen, wasn’t allowed to have conversations with Iranian officials about the nuclear deal.

Berman wrote that after a year-long probe, he declined to prosecute Kerry. The case was then referred by the Justice Department to a U.S. attorney’s office in Maryland, which reached the same result.

A spokesperson for Kerry reached by the Associated Press had no comment. Kerry’s representatives have previously said that Trump’s claims that Kerry was illegally trying to undercut the administration in its own dealings with Iran were false.

From the archives (September 2018): John Kerry says Trump has the ‘maturity of an eight-year-old boy’

In another revelation, Berman disclosed that his office had to fight to keep its prosecution going against Trump’s former personal lawyer, Michael Cohen, the Times said.

Cohen pleaded guilty in 2018 to campaign-finance fraud and other crimes after admitting his role in hush payments made to two women shortly before the 2016 presidential election to prevent them from disclosing affairs they claimed to have had with Trump.

Berman wrote that before the plea, a Justice Department official tried to get Berman’s deputy to remove all references to Trump, who was identified in the charging document as “Individual-1,” the newspaper said.

After Barr became U.S. attorney general in 2019, he paused investigations into whether other others in Trump’s orbit committed campaign-finance violations, and suggested that Cohen’s conviction on those charges be reversed.

Berman said his top deputy was able to persuade Barr that the conviction should stand and that the investigations should go ahead.

In the book, Berman also recounted how a Justice Department then led by Attorney General Jeff Sessions referred an investigation of former Obama counsel Greg Craig to his office in March 2018.

The probe was aimed at learning whether Craig had concealed work he did years earlier for the government of Ukraine in violation of the Foreign Agents Registration Act and whether he lied to the Justice Department about it, the Times said.

Berman disclosed in the book that he concluded that Craig was innocent of the potential charge and a jury would be unlikely to convict him of a false statement charge, the newspaper said.

Craig was eventually indicted in Washington, D.C., and tried on a charge that he had made a false statement. A jury acquitted him in September 2019.