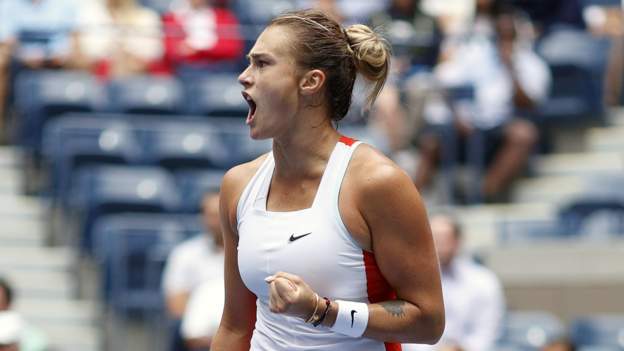 Aryna Sabalenka says she used her ban from Wimbledon as motivation in her quest for Grand Slam success after reaching the US Open semi-finals.

Russian and Belarusian players, such as 24-year-old Sabalenka, were not allowed to play at Wimbledon this year because of Russia’s invasion of Ukraine.

The world number six said she used the extra “pre-season” to work on her game.

“They took one opportunity from me, and I worked really hard for this one,” she said after beating Karolina Pliskova.

Swiatek, 21, advanced to the last four in New York for the first time with a scrappy 6-3 7-6 (7-4) win over American hope Jessica Pegula.

Sabalenka is the second player banned from Wimbledon to reach the US Open singles semi-finals after Russia’s Karen Khachanov booked a spot in the last four of the men’s draw.

She was impressive against 2016 runner-up Pliskova, firing seven aces and 30 winners without facing a break point, and said she had been working hard on her serve while she had not been allowed to play in London.

“It was a tough time, especially when I was working out in the gym and there was Wimbledon playing on the TV,” she said. “I was always turning it off because I couldn’t watch it.

“I had a lot of good memories from there, and I miss it very much. That’s why I wasn’t able to watch it, because it reminded me about the great time I had there.”

“I’m just trying to think in that way, that I’m just an athlete and I have nothing to do with politics.

“I’m just trying to play my best and make sure that people enjoy watching my matches.”

Swiatek dampens US mood by taking out Pegula

Eighth seed Pegula was aiming to secure a double celebration for the New York crowd by following fellow American Frances Tiafoe into the singles semi-finals.

The 28-year-old has been one of the most consistent players on the WTA Tour this year, but faced a player who has dominated this season and is looking for a seventh title of 2022.

After a decent start resulted in her breaking for a 3-2 lead, Pegula missed a swinging volley to allow Swiatek to level and the home hope’s confidence took a nosedive in the rest of the opening set.

French Open champion Swiatek, cheered on by legendary American skier Lindsey Vonn from her box, seized the opportunity and won 16 of the final 18 points to take the lead.

Amid a slightly subdued atmosphere in the opening match of Wednesday’s night session, both players continued to struggle in their service games.

Four successive breaks opened the second set before Swiatek, who had dropped only one set in the tournament coming into the match, took advantage of another poor game from Pegula for a 4-3 lead.

Pegula showed her annoyance by whacking a loose ball into the stands. The release helped her hit straight back to level at 4-4, as did mistakes from Swiatek.

The two-time major champion was not hitting as cleanly and consistently as she did in a remarkable 37-match winning streak earlier this year.

A huge slice of luck came Swiatek’s way with a net-cord on break point at 4-5 but twice she could not serve out the match as Pegula broke for the 10th time in 12 games.

That led to a tie-break which also started nervily. Swiatek stepped in to pump a backhand winner down the line for a mini-break at 5-4, brought up a match point with another backhand and finally clinched victory when Pegula dragged a backhand wide.