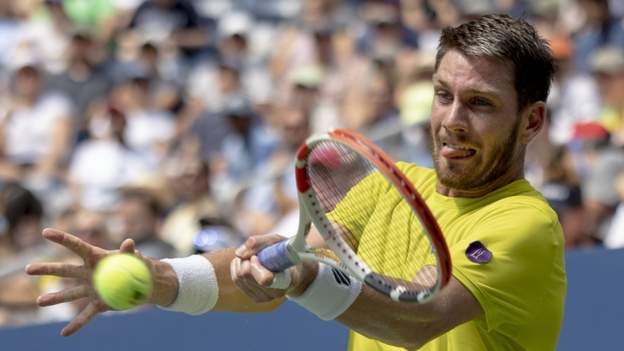 Britain’s Cameron Norrie saw his run at the US Open ended by Russia’s Andrey Rublev in the fourth round.

The Wimbledon semi-finalist had not previously dropped a set this fortnight, but was far from his best.

Norrie had moved efficiently and quietly through the draw, demonstrating his position as one of the form players on the ATP Tour.

But from the start the world number nine looked more subdued than he had in previous victories against France’s Benoit Paire, Portugal’s Joao Sousa and Norway’s Holger Rune.

Rublev was a step up in class and Norrie, after initially starting well, was unable to get a real foothold in the match.

The Briton found himself in a position he had not been this tournament – needing to fight back from behind – when a poor service game handed over a 5-4 lead in the first set.

Three loose shots left Norrie looking annoyed with himself and, after he stripped off his sweaty shirt as he walked to his chair, he was unable to stop Rublev serving out the set.

Even farcical rain delay does not stop Rublev

Norrie had perhaps been a little aggressive with his returning and still lacked rhythm as he fell an early break down in the second set.

Eventually he found a better balance as he threatened to break back in the third game, only for Rublev to hold on and maintain the advantage.

Rublev had all the momentum but it was suddenly stopped by a rain shower. Play was initially stopped at 3-2 and the crowd was told the roof would be pulled over.

But it wasn’t and the match resumed even though the threat of a downpour loomed overhead.

As Rublev led 4-3, it was still spitting and eventually the decision was made to close the roof – causing a 20-minute delay as the soaked court now needed to be dried with towels following the hesitancy. 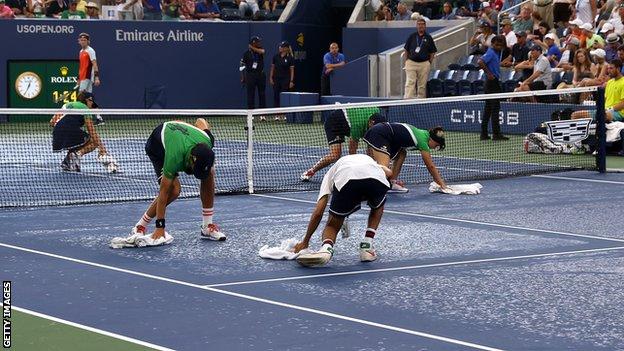 Nevertheless it did not damage Rublev’s flow too much.

When play resumed the Russian served out for a two-set lead, with Norrie left shaking his head at a poor forehand return on a second serve at 5-4, deuce.

Rublev continued to be relentless as he broke at the start of the third set, leading to Norrie breaking his racquet in a fit of anger rarely seen from him.

The release worked as he broke back in the next game and then it was Rublev’s turn to combust as a tense set ignited.

However, another edgy game from Norrie was punished as Rublev whacked a superb backhand cross-court winner to break for 5-4 and serve out to reach his third US Open quarter-final.