‘We have to reinvent ourselves’ – are Liverpool set for ‘season to forget’? 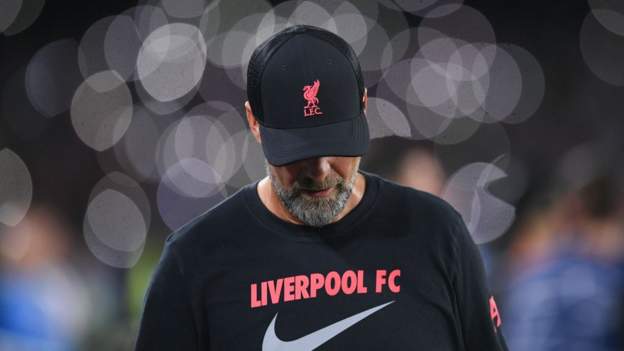 Last season Liverpool were so close to an unprecedented quadruple of major trophies. Yet four months on from defeat in the Champions League final, Jurgen Klopp is now asking whether his side need to “reinvent ourselves”.

Wednesday’s 4-1 humbling by Napoli meant Liverpool have now picked up just two wins in their first seven games in all competitions this season.

Former Manchester United defender Rio Ferdinand described the defeat as “embarrassing” on BT Sport, while ex-Liverpool striker Michael Owen said it could be “shaping up to be a season to forget”.

Klopp has overseen success at Liverpool since his arrival in 2015 but after a worrying start to the campaign is it time to make changes?

‘I need time to think about it’

Liverpool were 3-0 down at half-time as they slumped to their joint worst defeat in the Champions League.

“We played bad in the first half but usually we don’t concede three goals,” said Klopp, who has seen his squad hit by injuries this season and lose Sadio Mane to Bayern Munich in the summer.

“With Alisson in goal, you have to be really bad for that to happen. It looks like we have to reinvent ourselves. There is a lot of things lacking.

“We have Wolves on Saturday and they cannot stop laughing probably. They would say – and I would too – it is the perfect moment to play them [Liverpool]. We have to set up better in pretty much everything.

“In football there are always solutions. We don’t play good enough, that is obvious and that is why we lose games. There is a job to do, my responsibility and I need time to think about it.”

Liverpool left-back Andy Robertson said the players needed to “get back to basics” following a defensive debacle.

“We were miles too open. You can’t come to a place like this and not be compact,” he added.

“We deserved this result. You have to be ready to fight. We weren’t close enough to our mates. We have to wake up and quickly because we can’t perform like that.”

Individual errors were costly in Naples as Joe Gomez and Trent Alexander-Arnold particularly struggled against the lively Italian side.

Piotr Zielinski put Napoli ahead from the spot in the fifth minute before Andre-Frank Anguissa and Giovanni Simeone made it 3-0 at the break.

Zielinski scored again two minutes into the second half and by the time Luis Diaz scored the damage had already been done.

Ferdinand said you could “see the anger with Klopp” and questioned the desire of Liverpool’s players, while ex-Reds defender Jamie Carragher described it as a “defensive shambles”.

“The cutting comment is ‘ we have to reinvent ourselves’ – that is a big statement to make,” added Ferdinand.

“There are players there he is going to grill. You can’t have players where you question their desire. His success is built on commitment and he is not getting that with the way the team is playing right now.

“There are not many times where you can say Liverpool lacked desire and fight and [here] they lacked all those things. Too many of their big stars are nowhere near the levels we are used to.”

Owen added: “Napoli had strength and desire but it is a catalogue of errors from Liverpool. Liverpool fans have been expecting it for a while. They haven’t been great in the last few weeks.”

‘Owners expect me to sort the situation’

But is Klopp “too good a manager” to not find a solution?

The German boss, who has won every domestic trophy with Liverpool, as well as the Champions League during his time at the club, said he needed “time to think about it”.

“We were not compact defensively or offensively,” added Klopp.

“Everything is obvious but why it happened, I cannot answer now. It is a really tough cookie to take, but I have to take it.”

On the day Chelsea sacked manager Thomas Tuchel, Klopp was even asked in the news conference if he was concerned for his own position.

“Not really, our owners are rather calm and expect me to sort the situation and not think someone else will,” he responded.

After last season’s efforts, which led Liverpool to within a point of Manchester City in the Premier League title race, the Champions League final and two domestic cup wins, the contrast in performances during 2022-23 have been stark.

And they don’t have long to reinvent themselves as their next match against Wolves in the Premier League is on Saturday at Anfield (15:00 BST).