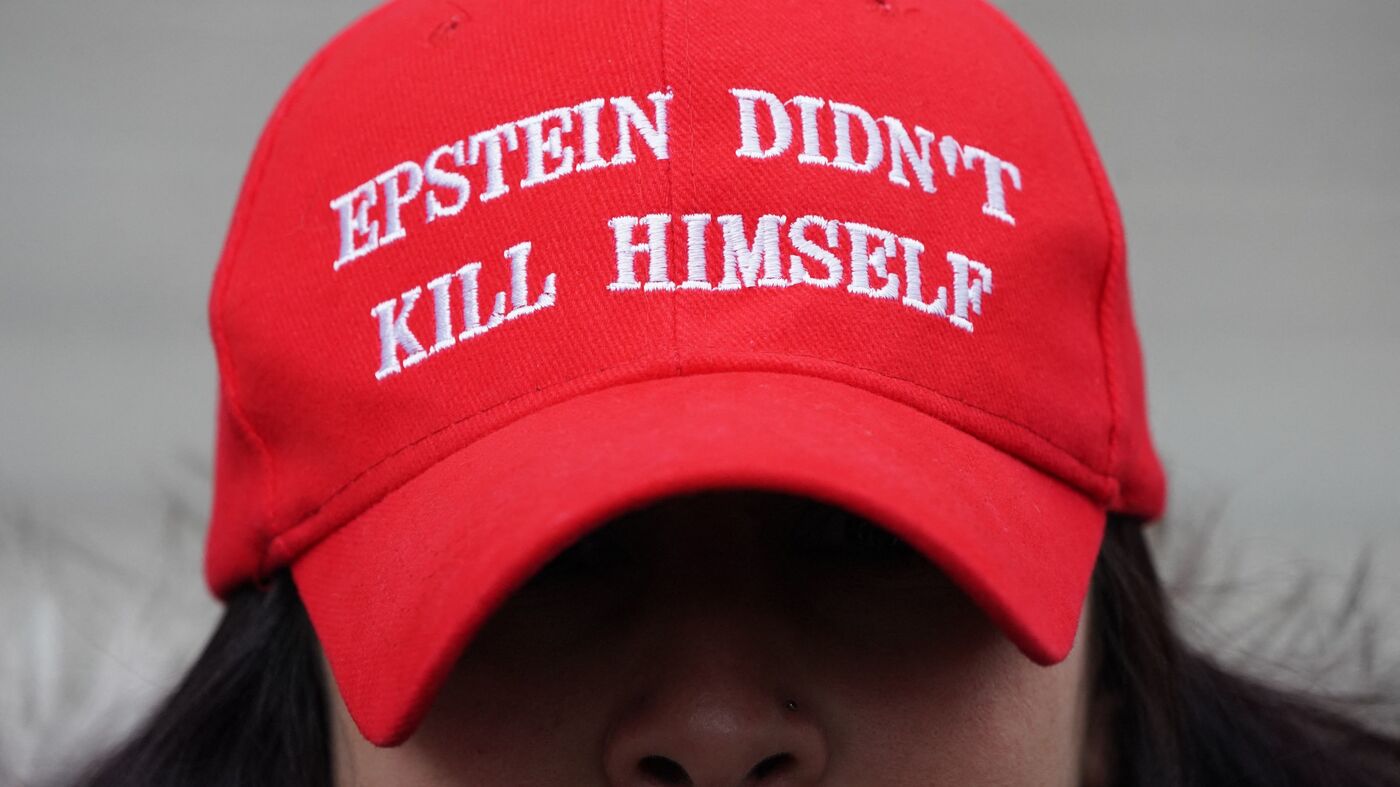 Protesters with signs linking the late Jeffrey Epstein to conspiracy theories at the sex trafficking trial of his accomplice, Ghislaine Maxwell , in November 2021 in New York City.

Protesters with signs linking the late Jeffrey Epstein to conspiracy theories at the sex trafficking trial of his accomplice, Ghislaine Maxwell , in November 2021 in New York City.

Jeffrey Epstein has been dead for three years, but his ghost still wanders the dark halls of the internet.

In life, Epstein was a secretive financier, arrested for a series of sexual crimes with underaged girls. In death, speculation about his suicide in jail formed an additional layer of conspiratorial fog around his legacy.

When the FBI searched former President Donald Trump’s Mar-a-Lago home in early August, it took less than a day for far-right internet personality Jack Posobiec to summon Epstein’s ghost. “We now know the judge who signed off on the Mar-a-Lago raid was Jeffrey Epstein’s lawyer. Don’t question it!” Posobiec posted to his 185,000 Telegram followers.

The claim, repeated across fringe threads and deceiving “headlines,” is misleading. While in private practice, federal magistrate judge Bruce Reinhart had previously represented some of Epstein’s employees who had also been accused of facilitating sex trafficking. In the case of the Mar-a-Lago search, the Miami Herald reported any magistrate judge would have signed off on the warrant when presented with probable cause from the FBI. Reinhart just happened to be available that night.

Within days, the false claim took off in far-right circles, drawing the attention of Fox News, which later had to issue a clarification for airing an edited picture that falsely showed Reinhart next to Ghislaine Maxwell, who was convicted as an accomplice to many of Epstein’s crimes.

This is just the latest spike of Epstein-related yarn-spinning, but Epstein is likely to remain a narrative for some on the right for years to come.

One clear reason for the staying power of conspiracy theories involving Epstein is his frequent socializing with the world’s rich and famous. He hobnobbed with Bill Clinton, Bill Gates and Donald Trump. Britain’s Prince Andrew lost his royal privileges over sexual assault allegations involving Epstein. Those relationships are potent examples for conspiracists to cast all nearly all political events as driven by hidden, sex-fueled abuses and coverups.

Epstein’s death by suicide in jail under Bureau of Prisons custody also fueled a popular wave of theories and memes. But it’s the established facts of his crimes that make him a useful character in an extended universe of fringe bogeymen.

A protester outside of the Maxwell trial wearing a hat claiming that Epstein’s death was not a suicide.

A protester outside of the Maxwell trial wearing a hat claiming that Epstein’s death was not a suicide.

Systematic child abuse and exploitation is real. Reporting by news organizations has uncovered major abuses in churches, among celebrities, the foster care system and so on. But these revelations can also easily be plucked and reassembled to form the backbone of conspiratorial narratives.

Before his 2018 arrest, the Miami Herald, which broke many of the stories about Epstein, saw the most online engagement with stories about him. An NPR analysis of data compiled by the media intelligence company NewsWhip found that today, online engagement with these stories has migrated almost entirely to conservative sites such as The Daily Wire and Western Journal, both outlets with massive social media audiences that mostly repackage professional journalism into narratives of conservative victimization and other right-wing themes.

Conspiracy theorist Alex Jones invoked Epstein’s life and death repeatedly as he defended himself in the course of a recent defamation trial brought by parents of children murdered at the Sandy Hook elementary school. Jones’ courtroom mentions of Epstein blurred the lines between established facts and popular speculation, framing Jones’ lies about the parents of Sandy Hook shooting victims as reasonable.

“It’s effective because lots of these things that are said about Epstein’s life are, in fact, true. And actually do kind of plug into a pre-existing kind of narrative about what our elites get up to,” says Quassim Cassam, a philosophy professor at Warwick University in the United Kingdom and the author of a book titled “Conspiracy Theories.”

Each detail of Epstein’s real, elaborate predation of young girls serves as a factual toehold for believers of the Pizzagate and QAnon conspiracy theories. Both are unfounded, interlocking narratives about powerful cabal of elites sex-trafficking children. In turn, they feed into fanciful depictions of Trump as a mythic hero, unfairly maligned and cheated out of a second term as he takes on an imagined satanic cabal. (Anti-trafficking organizations in fact sent President Trump an open letter saying “Anybody…who lends any credibility to QAnon conspiracies related to human trafficking actively harms the fight against [it].”)

Epstein’s ties to Trump himself are generally left unspoken in extremist, fringe communities according to Michael Hayden of the Southern Poverty Law Center, because the goal of an Epstein reference in these circles, he says, is to discredit anyone seen as attacking Trump. When unfavorable news breaks, any reference to Epstein is a quick way for his supporters to frame a debate as a false choice between Trump’s side or Epstein’s. It provides validation for fellow believers, Hayden says, and serves to diminish criticism about Trump. However bad a news event may look for Trump, by citing Epstein, the other side looks worse and more depraved.

“These are tools in the shed of people who are, for lack of a better word, fascist propagandists who understand how to use this friend versus enemy binary,” he says.

Within the current right wing media ecosystem, Hayden says whatever cultural barriers that once existed between the furthest fringes and mainstream commentators have eroded badly. The way disparate corners of the pro-Trump world come together in agreement over Epstein theories reminds him of the blend of crowds drawn to the January 6th capital riots.

“It’s a combination of people who are of a harder-edged variety and people who you would not expect to be mingling with them,” says Hayden, potentially leading to ever-deeper radicalization.

He says pro-Trump audiences have been exposed to years of tropes and hateful stereotypes anti-Semites want associated with Jews.

“We’re talking about explicit anti-Semites here who…like to portray Jewish people as being sexually deviant…or being predatory, particularly with young women. This is propaganda that goes back decades and decades. It’s very old,” says Hayden.

With that groundwork laid, “all you need is somebody like Posobiec, just need a big influencer to say ‘Epstein judge’ and …you yourself don’t even have to be dirtied with anti-Semitism,” says Hayden.

After Posobiec and a choir of right-wing publications promoted the “Epstein judge” idea, the real Judge Reinhart was inducted into the growing club of people whose home addresses have appeared in internet message boards alongside calls for execution and anti-Semitic slurs. He probably won’t be the last.

Hayden says to expect a very extended haunting from Epstein’s ghost. “It’s like – what is the opposite of a piece of classic literature?”