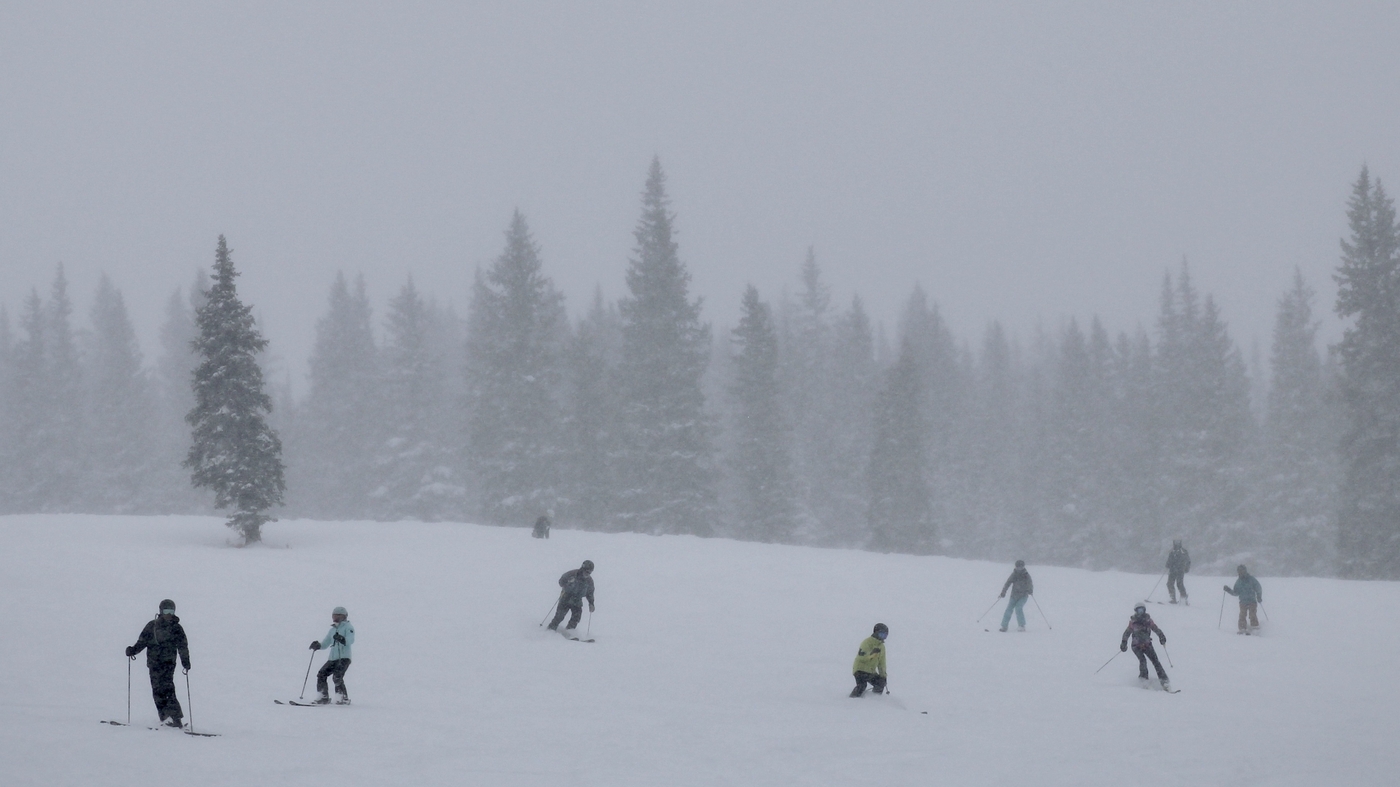 Skiers cruise down the slopes at Snowmass ski area in Colorado. This winter has already delivered snow totals above 130% of average, but climate scientists say it will take more than one wet winter to pull the arid West out of a 23-year drought.

Skiers cruise down the slopes at Snowmass ski area in Colorado. This winter has already delivered snow totals above 130% of average, but climate scientists say it will take more than one wet winter to pull the arid West out of a 23-year drought.

This winter, the West has been slammed by wet weather. Heavy rains have pummeled California, and the Rocky Mountains are getting buried with snow.

That’s good news for the Colorado River, where that moisture hints at a possible springtime boost for massive reservoirs that have been crippled by drought. Climate scientists, though, say the 40 million people who use the river’s water should take the good news with a grain of salt.

Snow piled high in the Rockies is crucial for the Colorado River — a water lifeline for people from Wyoming to Mexico in an area commonly referred to as the Colorado River Basin. Before water flows through rivers, pipelines and canals to cities and farms across the region, it starts as high-altitude snow. In fact, more than two-thirds of the river begins as snow in Colorado. This year, snowfall totals are well above average, but climate scientists say the winter is far from over and conditions could change bringing less precipitation.

“Everybody is so eager to make an early call on this,” said Brad Udall, a water and climate researcher at Colorado State University. “Invariably, you’ll get caught with your pants down if you think you know what’s going to happen.”

The Colorado River is in crisis, shrinking at the hands of climate change. A 23-year “megadrought” has created the region’s driest conditions in 1,800 years. That has created a yawning supply-demand imbalance for a multibillion-dollar agriculture sector and large cities — such as Denver, Phoenix, Salt Lake City, Las Vegas and Los Angeles — that depend on the river’s water.

More eyes are now turning to the snow-laden mountains that keep the river flowing and help to fill the nation’s two largest reservoirs, Lake Mead and Lake Powell. Those reservoirs have dropped to historic lows — jeopardizing hydropower for millions of people and threatening the need for costly modifications to the towering dams that hold the water back.

Eric Balken, with the Glen Canyon Institute, walks past a sunken speedboat in a side canyon in Glen Canyon National Recreation Area. Water levels in Lake Powell have steadily dropped, revealing areas that have been underwater for decades.

Eric Balken, with the Glen Canyon Institute, walks past a sunken speedboat in a side canyon in Glen Canyon National Recreation Area. Water levels in Lake Powell have steadily dropped, revealing areas that have been underwater for decades.

Meanwhile, mountain snow totals are off to a promising start. Around Snowmass in Colorado the snowpack is 130% above average for this time of the year. The Roaring Fork watershed, which includes Aspen and Snowmass, makes up only 0.5% of the landmass in the Colorado River Basin but provides about 10% of its water.

In other nearby mountain ranges, snow totals are between 140% and 160% above average. Even if those numbers persist until spring, the severity of the Colorado River’s drought means many more years of heavy snow are needed to make a serious dent in the low water levels.

“It’s great to see a big snowpack,” Udall said. “We would need five or six years at 150% snowpack to refill these reservoirs. And that is extremely unlikely.”

A string of wet years is unlikely because of rising temperatures driven by climate change, Udall said. Since 1970, temperatures in the Colorado River Basin have gone up by three degrees Fahrenheit. Those higher temperatures have already caused a 15% drop in streamflows across the region.

Warming has driven a raft of worrying environmental changes across the region. In recent years, scientists have sounded the alarm about soils drying out. The ground has become parched and soaks up snowmelt before the water has a chance to reach the places where people divert and collect it.

Already, Udall said, winters with 90% of average snowpack have led to only 50% spring runoff because thirsty soil acts like a sponge.

Even the concept of “average” has changed due to warming temperatures. In spring 2021, the National Oceanic and Atmospheric Administration shifted how it calculates averages for all of its data.

Every 10 years, NOAA moves the three-decade window that it uses for averages. But the rapidly accelerating effects of climate change mean the current window from 1991 to 2020 sticks out from previous 30-year periods because it includes the hottest-ever period in America’s recorded history.

Because of that, snowpack data tells a somewhat deceptive story. For example, if snowpack is at 130%, the number would appear substantially lower if current totals were compared to normal snowpack going back further than 30 years.

Planning has become much harder as shifting baselines make the future of water availability less predictable.

A supply-demand imbalance has shrunk Lake Powell, the nation’s second largest reservoir, imperiling reserves for a multibillion dollar agriculture sector and large cities – such as Phoenix, Las Vegas, and Los Angeles – that depend on water from the Colorado River.

A supply-demand imbalance has shrunk Lake Powell, the nation’s second largest reservoir, imperiling reserves for a multibillion dollar agriculture sector and large cities – such as Phoenix, Las Vegas, and Los Angeles – that depend on water from the Colorado River.

Cynthia Campbell, who has advised the city of Phoenix on water law for over a decade, knows this firsthand. The nation’s fifth-largest city gets more than one-third of its water from the Colorado River.

“Our worst case scenario, from our perspective, is that we have to be in the habit of annually looking to the mountains to see what is the precipitation,” Campbell said.

She said reservoirs should function as a buffer against the fluctuation of dry years and wet years. But with reserves shrinking to never-before-seen lows, cities around the arid West can only plan one year at a time.

“That’s just not enough time to make changes that you would have to make,” Campbell said with a nervous chuckle. “But that is where we are. So, in some ways, it might be our worst nightmare.”

Campbell and Phoenix residents are not alone in their hand-wringing.

As supply shrinks, the seven states that use water from the Colorado River have been caught in a standoff over how to reduce demand.

Water allocation across the basin is governed by a 1922 legal agreement that hasn’t been substantially rewritten to meet the needs of a changing region. Some experts suggest that agreement — the Colorado River Compact — should be replaced to meet the modern demands of a region with sprawling fields of crops and booming urban populations.

As the drought has worsened, states have agreed on a patchwork of tweaks to prop up reservoirs and stave off catastrophe, but they have been unable to reach a deal for larger, more permanent cutbacks of water use.

At meetings about the river’s future, delegates from the seven states — including Colorado, Utah, Arizona, and California — are quick to talk about the need for a collaborative solution to their collective problem but are reluctant to commit to sacrificing portions of their own shares.

The current managing guidelines for the river expire in 2026, and states are mostly focused on drawing up a new agreement before then. Policy analysts and water managers have hinted that major cuts will have to come from the agricultural sector, which uses more than 70% of the Colorado River’s water.

In the meantime, cities have had to get creative to stretch finite quantities of water for their growing populations. Those efforts have not been changed by this winter’s strong mountain snow or the rain that drenched California for days, causing major flooding and widespread damage.

“One storm is not going to change the game whether we get a wet year or not,” said Adel Hagekhalil, general manager of the Metropolitan Water District of Southern California. “We need to continue to focus on building the infrastructure we need to create local water supply.”

The district supplies drinking water to 19 million people from north of Los Angeles to the Mexican border. The agency has undertaken a number of ambitious projects to reuse water that is already in the system.

One proposed facility in Carson, California, would clean up sewage to make it drinkable. The treatment setup is projected to cost $3.4 billion to build. Once completed, it would cost $129 million to operate each year. That new facility aims to redirect up to 150 million gallons back into the municipal water supply in and around Los Angeles.

Water agencies in Nevada and Arizona plan to pitch in, helping pay for the project in exchange for some of Southern California’s water. The hefty price tag is just one example of the many new infrastructure costs cities may incur due to climate change.

“We have to be ready,” Hagekhalil said, “And it will be on us if we’re gonna take the right actions today to invest and build the necessary infrastructure.”

Elsewhere around the Colorado River Basin, governments have teased the idea of investing in other ways to augment existing water supplies. Last year, Arizona’s then-governor Doug Ducey proposed a deal with Mexico in which the state would fund an ocean desalination plant on the Gulf of California. That would allow Mexico to use the newly-desalted water in exchange for some of Mexico’s share from the Colorado River.

Inventive solutions like wastewater reuse and desalination have generated buzz among denizens of the region’s parched cities. But water policy analysts say none of them can serve as a silver bullet for those who depend on the shrinking Colorado River. Instead, they say, significant cutbacks to demand are the only way to meet the challenges posed by climate change’s impact on water supplies.

This story is part of ongoing coverage of the Colorado River, produced by KUNC in Colorado and supported by the Walton Family Foundation. KUNC is solely responsible for its editorial coverage.