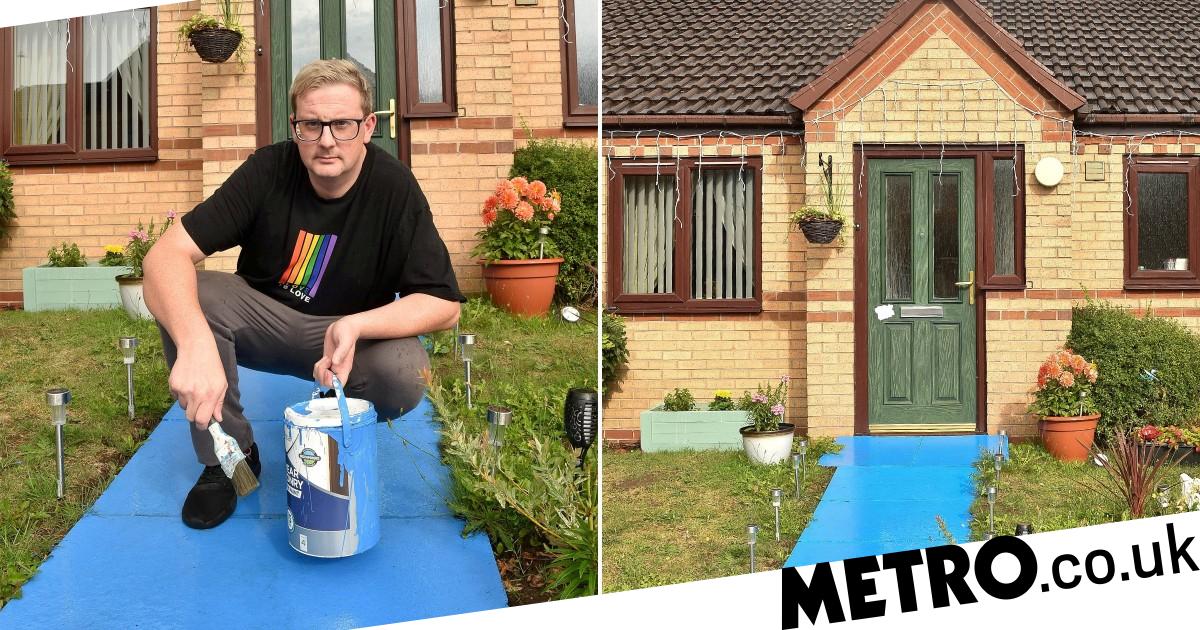 A couple who took part in some unsanctioned paintwork outside their rented home have spoken of their upset at being told to restore it.

Paul Ryder, 37, daubed their footpath and garden edges with a bright blue colour to spruce things up a bit.

But the landlord of their bungalow in Wolverhampton didn’t like it and they were told to remove it or cover it with grey.

He’s been given six weeks to restore things to how they were or face a fine.

Paul said: ‘We were told to remove the colour or paint it grey to follow suit with everyone else in the area.

‘We have tried to make our home our own and feel like they are controlling what we can do.

‘We were told we had four to six weeks to remove it, but I looked at my tenancy agreement and there wasn’t anything about the garden.

‘I asked what would happen if I don’t change it and they told me I would have a minor breach of tenancy.’

The couple have since hit back at the Bromford housing association and demanded to know which rules they have broken, and have asked them to contact them in writing with their demands.

Paul claims he was previously told they would be able to paint their path as long as they changed it back once they moved out.

The housing association also confirms no complaints had been made about the pathway, which Paul claims the neighbours ‘loved’ due to its unique nature.

He added: ‘What’s wrong with it blue, it’s a petty and ridiculous issue.

‘After looking at my tenancy agreement, I can’t see any clause I have breached.

“Our landlord always said to me that unless it’s a major adaptation like fencing or an outdoor tap, you would not need permission.

‘It is understandable that I need permission for these kind of house adaptations.

‘However, apart from big changes like this, I was told I could make the house my own.

‘I just wanted to brighten my house up because the slabs were dull, and a jet wash is expensive.

‘Loads of people have walked past and said they love it and it’s beautiful.’

An email sent to the couple by Bromford Housing said: “After our discussion last week regarding the painting of the path and edging I wanted to see if there was anything we could do to help as you said you couldn’t afford to buy the paint to paint it grey.

‘I can confirm that we received no complaints from neighbour’s in regard to the paint and that it was a Neighbourhood Coach that was covering for me when I was on leave that brought it to our attention.

‘All we would say is that permission should have been asked for prior to doing this and we would ask that you do not paint any other external part of your home, including paths, walls, doors and windows.’