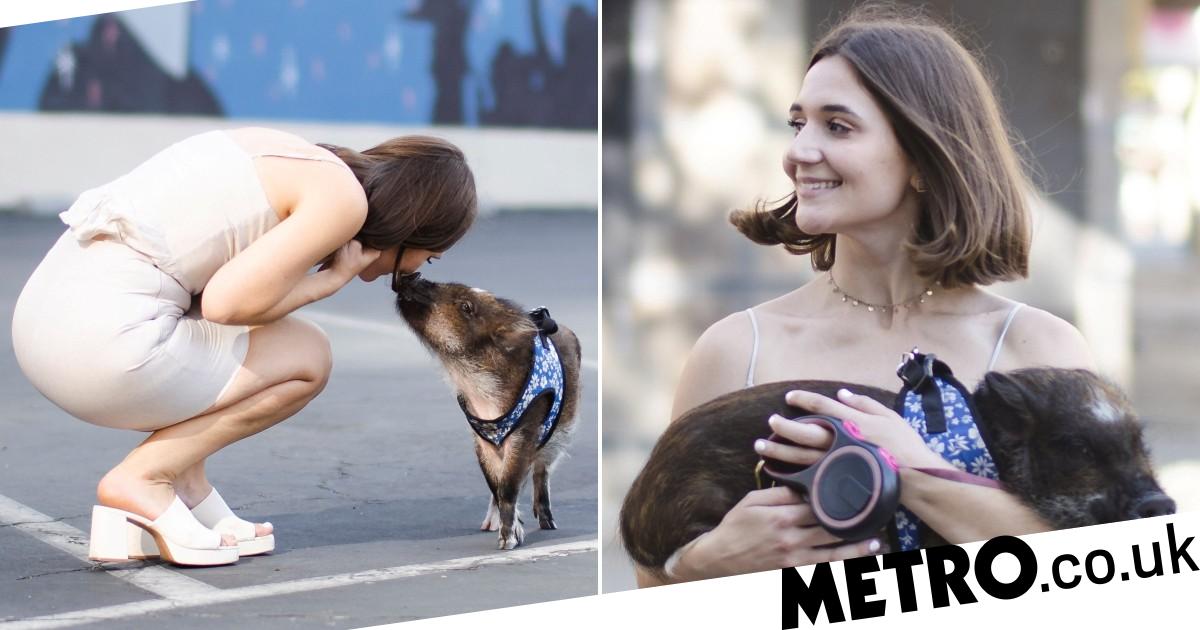 This adorable little pig has swapped a hog’s life for a dog’s life, being pampered by his owner and even learning tricks.

Since then, she has trained him to ‘speak’ to her by pressing electronic buttons which say ‘outside’, ‘eat’ and ‘ice’.

He can also high-five, dance, and perform tricks such as sitting and staying.

Mina takes Merlin for walks on a lead, and even takes him to dinner with her friends, feeding him a diet of Mazuri pig food, leafy greens, and ice cubes to cool down.

On her Tiktok account, Mina shares videos of the pair dancing together, eating meals, and taking orders from Starbucks Drive-Thru.

The inluencer first got Merlin – now one – from California Mini Pigs in Igo, a farm which has bred pigs for eight generations.

Mina from San Jose, California, said: ‘I love Merlin so much, I will do anything for this pig.

When she first laid eyes on him, Mina says the pint-sized porker ‘pulled on [her] heartstrings’.

‘I was crying tears of happiness because my lifelong dream to own a pig was finally happening,’ she commented.

Because Merlin was older and bigger than the other pigs and previous adoptions had fallen through, he was on sale, but Mina knew straight away that he was ‘the one’.

‘I drove him home in my car in a kennel made for a dog, and provided him with blankets and a duvet to start with in my apartment,’ she said.

‘I knew it would take him a while to get used to my space, because I did do a good amount of research, so I knew what to expect.’

After gently opening the cage and using food to lure him out, Mina started training Merlin not to scream whenever he was picked up.

‘The vet explained all pigs do this and you have to teach them they can’t throw a tantrum and get their way,’ she explained. ‘It took a while but I rewarded him with food to not scream and now he loves being picked up.’

Merlin soon settled in and is now extremely affectionate.

Mina said: ‘Pigs have the cognitive abilities of a three-year-old, so they want attention and need to be mentally stimulated throughout the day.

‘He has a lot of energy and, if he’s bored, he’ll scream his head off.’

By day, Merlin follows his owner around the house. Then, at night, the pair sleep together in Mina’s bed, and she says her porcine pal is ‘an amazing cuddler’.

The pig even has a button which says ‘play with rats’ so he can let his owner know when he wants them out of their cage.

‘A couple of weeks ago I trained him to open the lock on the rats cage, but he does it so much I have to confiscate it sometimes.

‘He presses the ‘go outside’ button all the time, and if he wants more ice-cubes to suck on he presses “more” and “ice”.’

There are a few other downsides to keeping a pig as a pet, but Mina is happy to put in the extra effort.

‘It’s definitely an obstacle sometimes,’ she said. ‘I love him so much, I’m OK with taking him everywhere and anywhere. But he doesn’t walk like a dog on a leash, which can be slow and annoying.’

She’s also regularly stopped on the street when out and about with Merlin, taking the opportunity to preach responsible pig ownership.

Mina said: ‘I always make sure to tell people, you have to ensure you have a lifestyle compatible with owning a pig, because otherwise it’s not fair to the pig.

‘You have to dedicate as much time and love and affection to them as you would a toddler.’

Merlin is a Mini Vietnamese potbelly who weighs between 30 and 35lbs and may grow as big as 80lbs (and 3ft long) in the future.

The spoilt swine even has a Starbucks drive-through order – a cup of ice with fruit during – which he gets as a treats on outings.

Despite sharing videos of Merlin on her TikTok account, though, Mina stresses that his welfare is the most important consideration.

‘We were invited to be on America’s Got Talent, but I declined because my number one priority is for Merlin to be happy and stress free,’ she said.

‘Making videos in the comfort of my own home is OK because I’m not looking to exploit or put him in a stressful situation.’

Mina added: ‘I’ve always wanted a pig my whole life, for as long as I can remember, and having him is a dream come true.’


MORE : If your date nights are confined to the DMs, you could be in a textationship